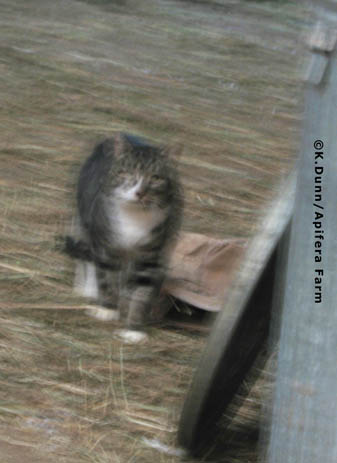 Thanks to so many that entered the raffle, or just sent donations! It's very helpful, especially in this economy, to have support for these strays that wonder onto the farm.I'll pick a raffle winner and announce it on the blog.

I told you all about the stray that wandered onto the farm around Christmas. His name became Samuelle Noel [pronounced Sam-u-elle No-elle].

He's semi feral, a beautiful tabby with white socks. I had planned to trap and neuter him sooner, but then lambing season traumas took over. I had to get him in for a snip, or the enticing smell of in-heat kitties would cause him to stray [An intact male cat will wander up to 3 miles to fulfill their innate sense to breed].

Well, last night Samuelle arrived at the barn in distress. His two front feet looked weird, as did his face. I was able to pick him up -which he tolerates, if only for a a minute] and his feet smelled of rot. Part of his bottom foot pad was gone, leaving open flesh. On top of it, when he tried to eat, there was something causing pain in his mouth. I tried to iodine the pad, but he was anxious, and I lost him.

He was onto to me, so I knew my best bet and least trauma for both of us was to wait until this morning to try again. So I placed one of my many crates on the front porch, knowing he usually showed up for an AM snack. Sure enough, he was there this morning. I knew he'd let me pick him once, briefly, and that was it. After much enticing, I picked him up, and quickly put him in the crate. A miracle.

I'm so relieved, as his wounds look painful, and he's not eating.He has a sweet personality, and I'm pretty sure he was dumped, as he arrived her with good conditioning, and a nice personality.

[raffle is closed]
Posted by Katherine Dunn/Apifera Farm at 11:02 AM

Bless you for caring about these lost souls, Katherine. xoxo

These little creatures sure know how to find love...

(ps-sorry about the deleted message, still very new to this.)

I read this and I'm glad that you will take care of him. Cats are such an underdog and get a bad rap a lot of times I think...

And then I sort of get "funny". I mean, I have 6 cats - all of them saved from bad circumstances. I have a couple of ex-racehorses that may have ended up on a slaughter truck. I have 2 dogs I brought home from the humane society and I don't ask anyone to help me cover the cost of keeping them healthy...

Animals can be expensive.

I don't know why it bugs me because there is nothing stopping me from asking. Why not ask?

I don't know... I guess I think you shouldn't take on more than you can afford?? Why should others pay for the animals you want to keep? Somehow in my brain it's different if it's a rescue organization or humane society - a business in the business of helping animals vs. an individual with a soft spot.

There is no rule saying I couldn't ask people for money, it's a free country and there are lots of different people doing things different ways to make it an intersting and wonderful place.

I don't mean to be argumentative or judgemental... and you certainly don't have to post! :) I'm curious why you ask? Maybe you are a rescue organization and I've misunderstood.

Katherine cares for animals that have been dumped, neglected and abused, as well as those who wouldn't exist if responsible owners spayed/neutered their pets.

I'm not sure why you want to distinguish between rescue organizations and "an individual with a soft spot." Shelters and rescue groups in this country are overwhelmed, and there are way too few of the no-kill variety. How long do you think Samuelle would last if Katherine dropped him off at a humane society?

I'm so grateful for Katherine and people like her who take on the messy, heartbreaking task of looking after animals no one else wants. Buying a raffle ticket or two makes me feel as though I'm helping too, in the only way I can.

I don't mean to sound argumentative either, Shanster. I just wanted to explain why I am happy to support Katherine's good work. She's doing me a favor, not the reverse.

Katherine isn't asking for handouts. She's raffling off a piece of her wonderful art.

I won a previous raffle and I love my print of Pino the donkey picking blackberries for pie.

Thanks for writing everyone-

CC - no worries, these Blogger things are a learning curve! Cathy,
appreciate your opinions, as always.

Shanster - It's nice you have rescued animals and can care for them. And yes, animals are expensive and I have seen many 'collectors" in my time where too many animals are rescued, with good intentions, but the person doesn't have the money to care for them, or right facilities or time.

You certainly have a right to your opinion - and judging from the tone of the few posts I just read on your own blog, you are one very opinionated woman.

Like Cathy said, all the strays on the farm have been left or dumped. I choose to help them, even when my income is tight. We are not living the high life in wine country, Shanster, we work a 7 day week to make ends meet.

I am not afraid to ask for help when I need it. And more than ever, as a self suppoting artist in these economic times, I need it. I never ask for help for our other animals that we have bought or own as pets. I did bring Guinnias home with help from kind donations [and raffle], but I guess collecting money to help defray the cost of 12 hour trip, made in a snow storm,to bring him to our farm would make you feel 'funny' too.

You say you 'don't mean to be judgemental", but you are. You have no idea the time and care I give these animals, or the others in the area I have helped with donations, or the art I have donated to many animal causes over the years.

As for closing your comment with 'best to you' - judging from the cynicism on your own blog posts, I don't think you and I have the same idea of what one's 'best" is.

Sorry you took it that way. I really didn't mean harm. Just trying to understand. Yup, you take in unwanted animals and that is a good thing. I'm really not trying to rain on anyone's parade or be the turd in the punchbowl. Just asking...

I really do mean the best to you and your critters. Sorry for the ruffled feathers. It really is different that my way of thinking which is why it's hard for me to understand and that is why I asked. Doesn't mean it's wrong.

As I said, there are lots o' different ways of doing things and that is what makes the world go 'round.