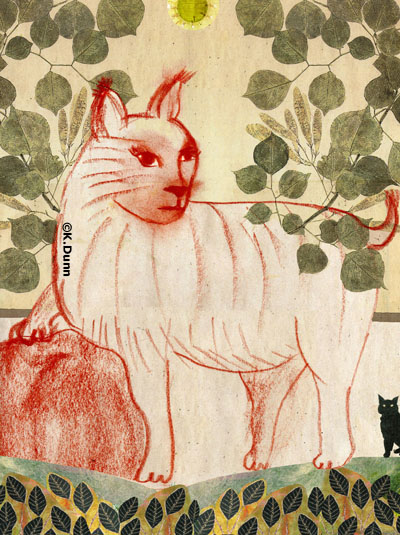 On Christmas morning, I got to the barn late, around 10 am. The day was cool, but very sunny. I was sweeping out stalls when I thought I saw Samuelle Noel walking about 20 feet from me at the old barn's edge.
But Samuelle Noel meowed, and was right at my feet.

"Hmmm, must be a new stray," I thought, somewhat excited at another cat saving. I waited, and the cat began moving slowly, parallel to me. As I slowly walked to get a better look, I meowed my signal of acceptance,
and it looked right at me as it walked. It was then I saw the beauty of this cat. I assumed it to be a tomcat, due to it's massive 20# body. It had the most beautiful markings of any cat I'd ever seen, and appeared to be the color of Big Tony, a gray Tabby, but much more striped, and very well built.

I was now about fifteen feet from the cat, and it moved past me, slowly, void of any panic in it's gestures or face. It was then I saw it's short stubby tail, and while I still meowed for it, it was then I thought, "Hmm, must be a mixed breed, or maybe it had a raccoon run in."

But as it's walk turned into a casual lope up into the woods, I realized it loped like a big cat, as in...you know, movies from National Geographic.

I'd never seen a bobcat, and there slightly-taller-than-a-house-cat size can throw off the first time viewer. It went up into the wooded hills behind the old barn, still easily in sight due to lack of leaf cover. It turned around, sat down and proceeded to watch me. I approached the forest line as close as I could, still about 15 feet from him. His head was beautiful, and much larger in proportion than a house cat, with ear tufts of white. He must have been amused and perplexed, having a two footer meowing at him like a cat. Finally realizing this was not a Mr. Schmookins house kitty, but a bobcat, I conversed with him.

"Stay away from my animals. You're beautiful, but you can't stay here. "

He waited about 10 seconds, and calmly trotted off.

I was both exhilarated at seeing this wild predator, but my heart also sank. Images flashed in my head of hens and cats and pugs. My charges. I hadn't let the hens out for free ranging yet, so fortunately my timing was good. If I'd done chores 15 minutes earlier, who knows. All day long, I had an uncanny feeling he was watching, waiting. The wood line of the property is also partially guarded by the donkeys, and all animals are tucked away at night, except the barn cats. A bobcat will eat about 2# of kill, then leave it and come back to it when hungry. A cat could feed him for days. I had images of sitting in the barn with rocks. I tortured myself later in the day by listening to audio clips of bobcats online. Now I know why some people think there's a Bigfoot in the northwest hills.

And back at the barn, I did my morning feedings. The cats were all there but one. Mr. Bradshaw was absent.

I spent much of the day doing chores, working on fence projects with Martyn. We kept our eyes open. But as we live on the land, we're not the hosts to the daily party, we're the guests. He had every right to come look for food when he smelled chickens and cats. There is a mother hen instinct that took over me that morning. I wanted to gather everyone in a big room, and close the door. But that's not how it works. I spent time with the donkeys, and whispered to Pino, "Please tell the bobcat to stay away." Go ahead and laugh, but I'm quite convinced he listened. And I've also convinced myself that walking up within 15 feet of that creature and calmly telling him I'm the boundary line, it made a point.

We will hope for peace within the barnyard in coming days.

And that night, Mr. Bradshaw returned.
Posted by Katherine Dunn/Apifera Farm at 2:18 PM

Email ThisBlogThis!Share to TwitterShare to FacebookShare to Pinterest
Labels: Cats of Apifera, Life on the farm

Oh my goodness! I would have been a bit more frightened than you appear to have been and I consider myself to be pretty tough in adverse situations. Well done!

Well, it took me time to register. It all happened in about 3 minutes. Had he walked towrd me I would have acted aggressivly and made myself big. And he was on my turf, not in the woods. Thank goodness it wasn't a cougar, which have been sighted as close as 3 miles away.

Love your bobcat story. I feel your connection to the nature in your writings. How we do so love our critters. I say this as my cat is curled on my bed and my pug is at my feet. Love fellow animal people. :)

we've only had one bobcat sighting in my memory and he never did bother any of the calves, hens or cats so we were thankful...hope you will be lucky too!

What an amazing encounter! I believe he sensed your appreciation and respect and returned them.

We LOVE your blog and have added a link on our favorite blogs list! Your blog is gorgeous! Our CEO has coyotes in his upscale Dallas neighborhood. Happy New Year and cheery wave from Bev
http://44thstreetfabric.blogspot.com

Loved this story. I enjoy reading your blog. I saw a bobcat just a few weeks ago driving down my lonely road.

Have a good New Year good luck with your animals.

So glad Mr. Bradshaw came home. I recently had the same sort of feelings seeing a very large and bold coyote a few blocks from my house - so feral, so other worldly, and yet such a threat to my little dogs and the neighbor's cats (one of whom was killed last summer by a coyote). I hope your beautiful visitor moves on peacefully.

Oh, dear, I hope he moves on and leaves your animals alone.