Aunt Bea we are with you 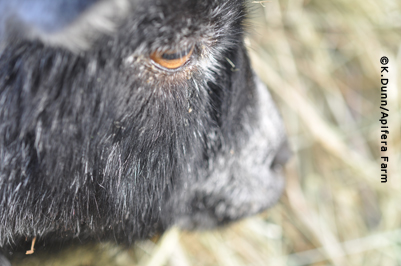 Sweet little Aunt Bea is struggling to survive. The malnourishment has wreaked havoc on her little system and we are doing all we can do to give her a chance to live more days in the sun.

[Note: People have asked, and yes, you are free to donate to help with the $400 vet bill. Just go to the sponsor page and scroll to Paypal gift option levels. And of course I greatly appreciate it.]

Aunt Bea was rescued by New Moon Goat Farm and we brought her, along with Professor Otis Littleberry, to Apifera in late November. While everyone has had a chuckle about her very wide load, she is very malnourished after living in a place that had no feed for her, none. The blood work came back on Friday night and she is loaded with liver fluke [she arrived at New Moon loaded with lice too]. Her liver is borderline,her glucose was low and her PacCell count was very bad. We are giving her daily injections and drenches, probiotics and sugar water. She was basically a bone under her skin, and in lay person's terms, was starving and being sucked dry by parasites both internal and external. It's been chilly, so I wrapped her in old sweaters and lamb jackets, and then bury her in hay at night.

Every morning as I walk to the barn, I say my mantra, "Come on Aunt Bea, come on Aunt Bea." I hold my breath as I peak in the stall. She is on Day 4 of treatment and I noticed a tiny bit of improvement today. She can't stand on her own, or get up on her own, so I make her stand. Then I get her in a little wagon and take her to the sunny paddock - I'm a firm believer in the healing of mother earth and sun. She stands, doesn't move, but she is eating and drinking.

I know New Moon - who we have worked with for years now and have adopted 8 needy goats from- felt badly about this. But I really believe this was meant to be. I can give her one-on-one attention here since my little misfit herd is small. If New Moon hadn't taken her and the 7 others in, they would have died for sure [4 of the original herd did die wile in the former home]. I'm sure she and Professor are getting more attention than they have in the past year when they lived at the neglectful home they had been sent to [the first owner died, and had cared for them very well. I hope she is looking down on Bea].

I don't want to partake in over zealous name calling that can happen in animal neglect cases. I see it all the time on Facebook - people throwing insults and judgments out at total strangers for neglecting an animal, when they don't know anything about the circumstances. There are some really good people that get in life changing situations where the animals end up suffering, but it is not because the owners were bad people [some are, I agree, but you don't know the situations]. So I will leave the mud slinging to the masses, and won't allow it on this blog in the comment section.

What I do know is this. When I can care for an animal like this, even if she doesn't make it, she will go out loved. That makes me human, and humane. And I am reminded with each shot I give her, each caress and kind word I whisper in her ear, that I can always choose the humane path, even in a small way like helping a little, starving goat.

I tell her every night, "Aunt Bea, there is a lot to live for her here. I will fight as long as you do." 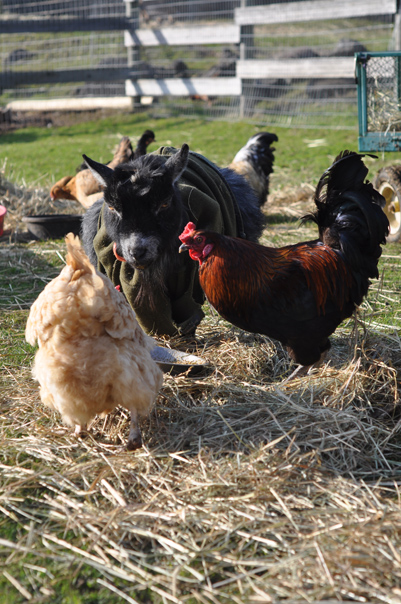 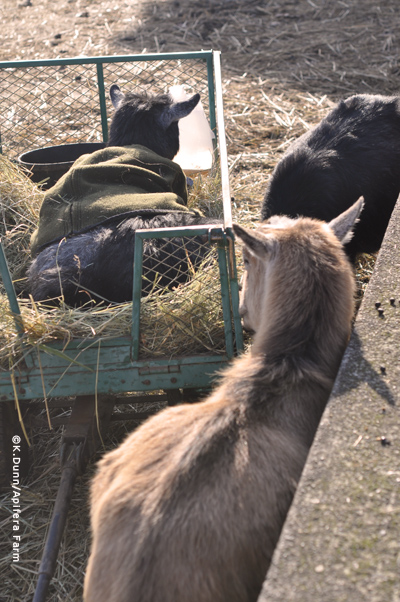 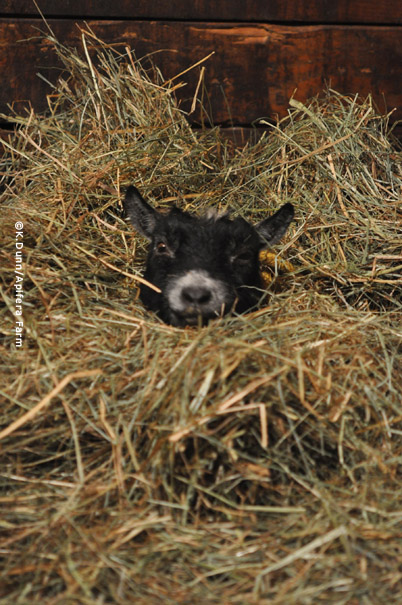 Posted by Katherine Dunn/Apifera Farm at 10:39 AM

I just wanted you to know that I love hearing about your animals.I am so sad for Aunt Bea, I will think of her and say a prayer or two. I agree that the sun and the earth are great healers keep givn' her the love!

Please get well, Aunt Bea. You are a shining light and you have arrived at the most magnificent place. I send you white light of healing. I send you greetings from wee Fezzik, who battled the odds and has come through stronger and bolder despite his aggressive lice infection when I got him. We're all pulling for you, dear Aunt Bea. xox

Thank you, Katherine, for allowing Aunt Bea's light to shine! On my knees for her this evening.

Aunt Bea looks happy in her hay bed. She must be enjoying all you love Katherine. xo

I too am saying a prayer for Aunt Bea's fight for her life. You are truly an angel to help these poor defenseless animals the way you do. There will be a special place for you in heaven.

Oh Bea, we all love you.

Surrounding you all in healing light and love. Dear Aunt Bea - you are in my heart. May the goat fairies bring you special magic to heal!

You said, "even if she doesn't make it, she will go out loved. That makes me human, and humane."

You're so right. We create peace with our actions. Thank you.

Oh poor little Aunt Bea. She has to be a strong little goat or she would not have made it this long. I've been in your position nurturing goats many times and I never forget the ones I've lost or helped save. I think the sun therapy will help her more than anything. Once a goat gets stressed or depressed it's even harder to save them.
Hugs
Amber

Aunt Bea, you have a beautiful face and I hope you continue to gain strength under Katherine's care... and Merry Christmas!

Hi Katherine, what you are doing for Aunt Bea and the other animals is so incredibly beautiful and loving. I really appreciate that you are taking the high road with regards to the comment posted on your blog, and for concentrating your energies on helping these dear ones to heal and thrive.

I truly believe they will feel your peace and it will make a difference, in ways we might not even imagine. You are a tender hearted person and I know you make some painful emotional decisions and sacrifices while tending to these sick ones. How brave and self-less you are. Delisa