When a woman loves a Pug 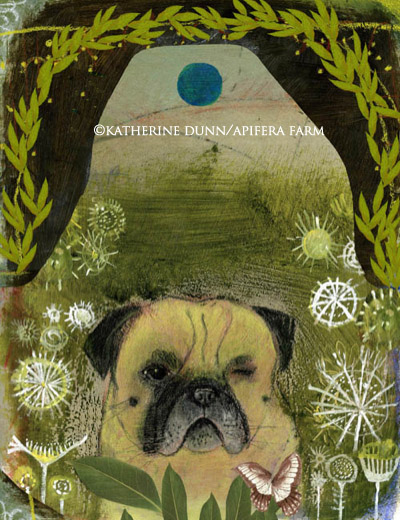 In honor of The Old One Eyed Pug's birth week, I have written this in my Life After Pug state of mind and heart.

But the other day, and each day since it seems, I can't help think of The Pug as I'm sitting in there. Because that was the Pug's job–to come into the bathroom each morning and wait for me to be...you know, finished.

So I was sitting there watching Muddy's giant tail, and it's a wonderful tail, it's a battleship, really–it can take out entire shelves and sustain no damage. But it made me think of The Old One Eyed Pug's little compact curly tail, and how much a Pug's tail is like a pig's. A pig expresses a lot in how it curls or uncurls his tail. The Pug did too, and when he uncurled it so it hung like a Lab's tail, it either meant he felt ill or was so relaxed he did not have the energy to recurl his tail. When he was that relaxed, even his one giant eyeball looked sleepy.

I miss the way he wagged his curled tail. Any Pug owner knows what I mean. It's this tiny curled masterpiece the way it moved.

The Pug died a couple weeks after my mother, last April. You know the story. I won't bring everyone down reliving it here. I often write that living is the important thing we have, versus looking backwards. But the state of Life After A Pug leaves me reminiscing a lot about his sqooshy face, his giant eyeball left behind after he lost the other one and enormous quantities of gas emanating from him while he slept unbothered.

Oh, the gas he passed. But I'd take a lap of it tonight to sit and hold him again, as his snores encouraged me to turn up the sound on the TV.

I have friends with pugs. And I have some online friends with pugs. I swoon over their pug photos. They understand that Pugness is a state of heart–One never gets 'over' Pugness. Never. There was one rather annoying "friend" on Facebook who really wasn't a friend [and is no longer a friend....you know how that goes down] and she had Pugs and after Billy died she kept posting pug photos on my Facebook wall, not weeks or months after, but days after. I didn't say anything as I assumed she meant well, but it was rather hurtful. She also told me to "get off the couch" just days after Billy died, meaning, "Go out and get another one, you know you want too." I didn't react to that either.

So, before I go further - a tip to all reading this. When someone is in Life After A Pug, do not haunt them with new Pugness! Let them wallow in their broken Pug state.If they seek more Pugness from your Pugness, then you may share Pug love with them.

I plan on having a Pug again. In fact I'd like two. But, I am committed to getting my dear mellow soul man, Huck, through his senior years. He is so sensitive and although he loved The Pug, I just feel I need to let him live his days out without a new gas maker in the house. The Dirt Farmer might just leave - he must have some limits to animal acquisitions, I must be wise. He's the best cook around among other things.

So, to my little Billy Baker, my One Eyed Pug, Pug, Oh Pug, I am thinking of you on your birth week. I miss you. I know exactly where your body lies under the lilacs, and I know exactly how I laid you to rest and which way your head faced. I can see you. My Pug. 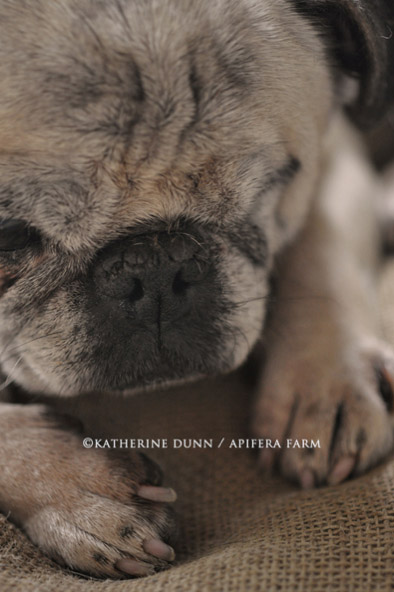 Thinking of you...as you think of him. I hope all of your thoughts of your sweet Pug Boy bring you only joy and comfort.
Erica

Oh how lovely it would be to hold a beloved pet again. Reading your moving words about your darling Pug has reminded me so of our Jack Russell, Ruby. She lies under the jacaranda tree with her favourite toy, a red rubber chicken. I smile every time I think of her.

i'm sure he misses you too!
i got a snort and a sniff out of this one.
and maybe even a whiff..;-)

Marjory, a red rubber chicken, made me smile. "A snort a sniff and a wiff" - I love that. Thanks for visiting all of you.

I adore pugs - I just lost a little furry baby (unknown breed) who used to do the cutest things - all on her own terms. I couldn't snuggle with her, unless she wanted it, but when she did - I got lavished with "puppy kisses". I miss them.

A Bar Kit was my beloved black greyhound that passed away in January of 2009. I still miss her and sometimes I feel her brushing past my legs. It makes me happy to think about her dancing with me.

Sending hugs - what a wonderful pug you had and so great that he had you too. Brought tears to my eyes and heart-dogs love in such a special way. My Mojo Bubbins loved to snuggle up every night with his face in my arm pit and just make the funniest noises. Grunting and cooing - I miss him so - he was a mixed breed Pit Bull around 120 lbs of sweet dog.

Every time I see a Pug, I think of sweet Billy and smile. He was so lovely to me, even when I accidentally stepped on him.

My dog isn't a pug but he stands near me when I am blowing my hair dry every morning in the bathroom. Love!

Can't wait for your book…your writing touches me.

This is so beautifully written. We had an amazing pug cross, Abbie. She passed three years ago tomorrow on Halloween at the age of 13.
It took almost one year before we adopted our rescued pug, Marley and this year in April our rescued one eye Mollie.
Once you have pugs in your life....it's difficult to imagine life without them.
Thank you for sharing your beautiful art and stories.
Lauren

Mattie used to cold nose me. Being a Border Collie, I was her charge, her one stray sheep. I'd be cooking; painting; standing at the open fridge door deciding if I should have yet more watermelon and there it would be, that ice cube on my calf. I'd hop,
"Jeez Mattie" Then I'd get that look, the one that says I'm just checking on you. Making sure you stay safe in the flock. (of one).
Your pug was a sweetie, I can see that.
xx
julie

Hey, you make me cry. Lucky animals on your farm.

Such a bittersweet post. I've lost so many cats in my life since I have my own little feral/stray/formerly feral colony. I love them all. I vowed I wouldn't get as attached to my outdoor cats as I am to my indoor cats because, you know, there are some dangers outside...but it didn't work, I love them just as much and look for them when they don't show up for a meal. If you love animals, they take over your life.

So many memories and nice images I visualize from your comments....

If you came over from Facebook link you know that one of you who left a comment will get an art card popped in the mail to you to send you cheer. And after careful consideration, the barnyard has chosen Milady Productions. They lined the names up in sun and watched sun spots and somehow came to this climactic choice- I do not ask how they do these things- they claim it was fair and square.