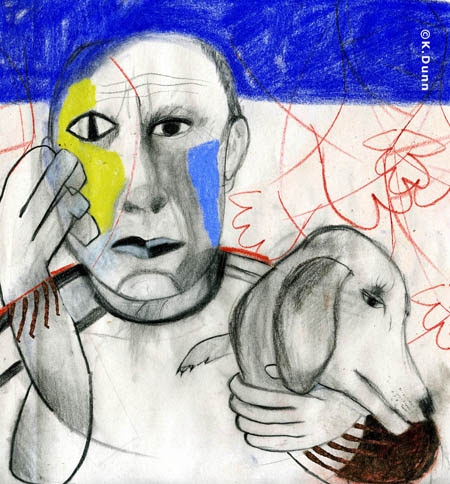 I have been thinking about Picasso a lot for some reason, and was drawn to a book by his good friend, and world renown photographer, David Duncan Douglas. "Picasso and Lump: A Dachshund's Odyssey". Lump the Dachshund belonged to Mr. Douglas, and would accompany him on visits to Picasso's. From the first meeting [documented in the book], Lump and Picasso formed a comfortable union, and Lump basically stayed on there while Mr. Douglas traveled for his assignments. Lump had the run of Picasso's house, also inhabited by a boxer called Yan and a goat, Esmeralda. Picasso owned many dogs in his life, but it is only Lump that he held, often like a baby we are told. While he preferred to work totally alone in his studio, only Lump was allowed in, and the dog appears in 15 of the 44 "Meninas" studies of this era [1957]. Picasso once exclaimed, "Lump is not a dog, he's not a little man, he's somebody else." I responded to that, and it speaks of a couple dogs I've known, and definitely Pino.

At some point, Lump became sick, suffering from a spinal condition prone to his breed, and Picasso put him in a vet clinic in Cannes. When that vet could not help Lump, Mr. Douglas retrieved him and took him to Germany to his old vet for more help. Lump stayed there in the care of this trusted vet for some time, but the dog could not be cured, and eventually, Mr. Douglas took him back to his own home where he lived out his life. Lump was never able to visit Picasso again due to his condition. In April of 1973, Mr. Douglas lost two dear friends. Lump died one week before Picasso.
Posted by Katherine Dunn/Apifera Farm at 10:21 AM

I've been wanting to read that book...so thanks for reminding me about it! I love the bond that Picasso and Lump had...and dying within a week of each other is pretty amazing. Beautiful drawing too.

i want to check that book out. thanks for sharing. love the drawing, too. it would be a great way to add to your portfolio---and still draw animals---by drawing famous people (or illustrating stories) that have to do with people's relationships with 'their' companion...

I´m sure Picasso would have loved your portrait of him and Lump. Maybe the both are sitting somewhere reunited and smiling about it.

I look at the Picasso and Lump book every single time I go to the MOMA gift shop in NYC. What a great connection between artist and dog. I grew up with dachsies and know what a great addition they can be to a family's life.
:)
Eleanor Traubman
creativetimes.blogspot.com