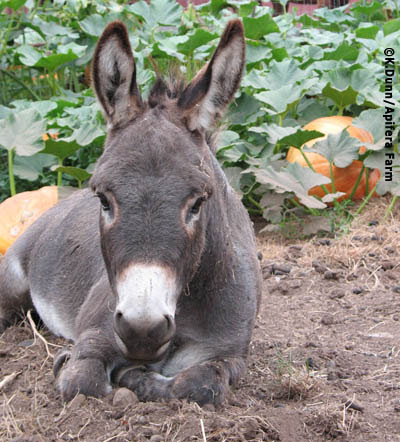 In which you learn about Jimmy the mouse lord, and perhaps feel enticed to enter Paco's art raffle.Enter as many $5 quantites as you'd like. Enter by October 5th.

In case you thought I was just making it all up, I took this picture this morning of Paco guarding his giant pumpkin. For those of you who loyally follow my blog, you know that little Paco is a grumpy creature with a good heart, but with a tendency to over-guard everything that moves - that includes leaves and hoses. I have also been accused of giving too much attention to Pino. This of course is not true. Paco has no desire to be in the spotlight and press. He just wants something important to guard. So this year his wish came true when I planted these giant pumpkins just for him.

As I explained to Paco, and I will explain here for you, the giant pumpkins were created by a mouse lord way back before, well I don't know when. It was a long time ago. The mouse Lord, named Jimmy, bred the giant pumpkins for geodesic home domes for his colony of mice, of which there were thousands. Mice workers would tunnel in and carve out the giant orb, creating a perfect winter home for a large family of rodents. Mice prefer round objects to anything with sharp angles, allowing them to pile together in a natural ball form. 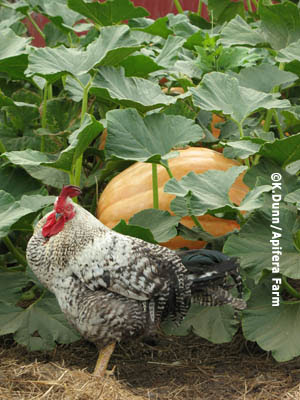 So I told Paco we must guard these giant orange creatures until the descendants of Jimmy [thought to have lived in the Northwest in his final years of life] take over.

Paco did not show any emotion when I declared him Pumpkin Guard - not his fashion to show any kind of joy. He simply asked where I would plant the pumpkins. When I told him the 'black gold' pile - years of horse and sheep manure all composting into rich, black 'gold' - he did seem to show a glint in his eye. For the black gold pile is where the donkeys are often found rolling and sunning in leisure hours.

As Paco's pumpkin has grown, he has taken his duties even more seriously. During day hours when the donkeys are in the lower sheep field, Paco has relegated Ward Schumacher the rooster to guarding the pumpkin. So fitting, what could be prettier, that red comb against the orange body. I sense a real pride in Paco when he sits near his pumpkin. Like many things we raise here, I remind Paco on a regular basis that this pumpkin is not ours to keep, we are just caretakers.
Still, I can see him slowly getting attached not only to the orange creature, but also to the feeling of duty that comes with guarding it.

So, I will buy some wood and such and build a special guard hut for Paco. We will place special items in the hut, and tell Paco they are his forever, to guard. I am not telling him until it is all done. It will only cause him worry. And he needs to focus on his pumpkin duties.
Posted by Katherine Dunn/Apifera Farm at 10:58 AM

you crack me up. and btw, if you and martyn ever decide to go off on an adventure for a month, i'd love to come animal-sit for you. hee. i'm so in love with all of them. xo

What great pix! Paco & Ward are lovely, but Martyn is RAVISHING in that apron.

What a fabulous photo!!! I wish I had a garden like yours. Our pumpkins came out quite puny next to your luscious pumpkin patch. And your rooster......he's looking quite robust!

You sure take good photos. I so enjoy looking at them.

I'm in love with a donkey. Look at those eyes. How could anyone not fall in love.
Don't worry you sweet, serious, little donkey. Just keep your eyes on the pumpkins.

Oh, what a great photo! He is SO cute guarding his pumpkin patch.

Please, please write a childrens' story about Paco, Jimmy, and the pumpkins.