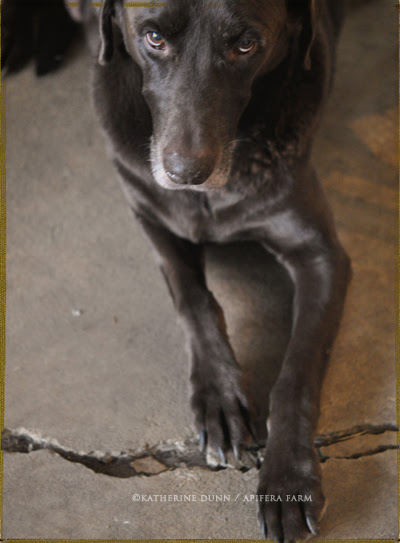 It is like living with any elder, you see the changes in their appearance in spurts, but you quickly change your thoughts to something more comfortable. Aging is like that–even with all its benefits and wisdoms it also comes with bouts of realities that hit you hard-like the fact that your dog is entering his final years.

Ten is such a solid number and makes you look back at the past. I remember driving up to get him, with the then Two Eyed Pug in the truck {those two eyes would become one soon after due a complete misunderstanding between pug and pup}.We had lost my old friend Louie Louie the terrier who was my one and only sidekick for fourteen years and came to Oregon with me, got me hooked up with Martyn and then the farm, and then he went on to the next realm without me. It's how it works, dogs help you out their entire lives without complaint and then they get to go a big amazing walk-about. I liken it to a parent getting their kids out of college and saying, "OKAY, I've done my best for you, now flourish on your own while I go out and explore." The dog is the parent to many.

Huck is a Buddha. He always has been. This is a dog that from day one asked if it was okay to enter the room. In fact he rarely enters our bedroom or bath-unlike Muddy who barges in every morning with complete joy,

Why would you want to sleep until seven, he thinks.

Huck is the one on the outside of the door way, sitting quietly, waiting, really wishing he had the guts to bash through the door like Mud, but, he never does.

He has become more arthritic this year, and while his chin has been grey for awhile, little white flecks are appearing over those deep brown eyes-those eyes-the ones that suck you in at any time, anywhere and say,

"Is everything okay? Are we okay?"

Huck now has grandpa privileges. He gets to sleep on our couch and watch television with us while Muddy sleeps on the other couch. Don't feel badly for Mud, that is the couch I paid-well, more than I can imagine paying for any piece of furniture ever again, but I was single and plusher then without a hay bill and elders stcked up in huts outside. I have such a different relationship with Huck than I do with Mud. Both are solid and good. But Huck is more my right hand guy in the studio. He worries for me. He speaks with his lips and contorts them in different ways when he is trying to communicate with me. Between his lips, eyes, and tail, we communicate just fine.

So I'm raising a glass to a chocolate lab tonight. He has brought me his velvet ears every day to touch, and a nose that never ceases to make me sigh. He is Huckleberry Pie. 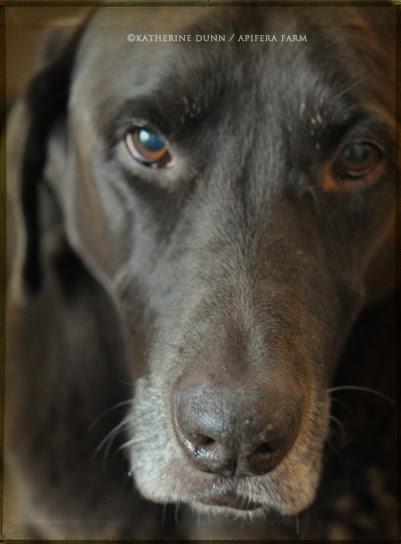 Raising my glass as well - here's to you Huck - Happy Birthday!!

Raising my glass to you Huck. Happy Birthday sweetie!

And as I'm reading about Huck, my 11-year-old German Shepherd Dog, Finnian, wandered over for an ear scratch. Our seniors are a precious gift! Happy Birthday, Huck!

Happy Birthday to Huck. May he have some more great years by your side. xox

He is a gentleman, in the true sense of the word, and a sweet, soulful boy. Happy birthday, Huck!