Painted toes, pickles on the side please 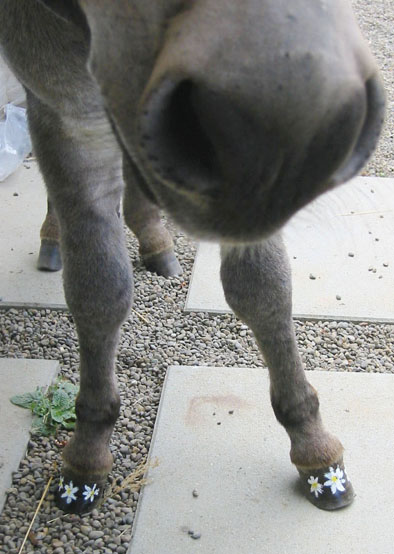 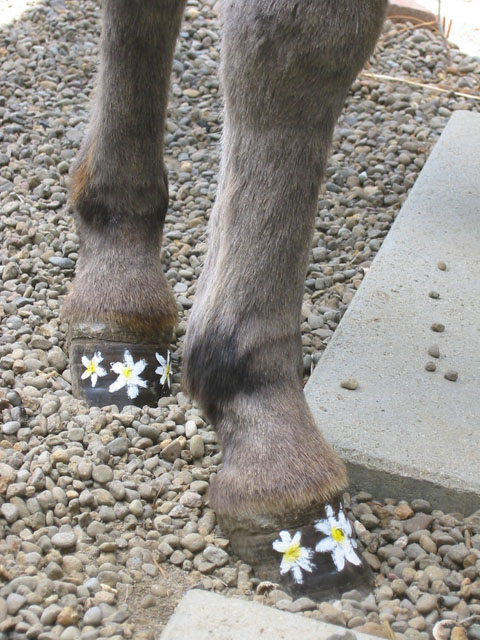 Pino's first venture out as a birthday-party-surprise-guest was a huge hit. He stood patiently while I put the finishing touches on his party toenails, and finally, with pink balloons attached loosely to his neck, Black Eyed Susans tucked in his halter, and his gift tucked under a rope, he eventually made it to the river side where the party was being held. Once at the party, he was greeted by a bevy of squealing little girls - hugs followed, petting, more squealing. He handed over his little gift to the birthday girl, wrapped in pink paper to match his pink balloons. He had brought her a set of fabulous shiny, gaudy gem stone rings set in fluorescent plastic settings - fit for a queen, or a five year old. The food served included a vegetable tray of carrots, which the little party goers quickly discovered were a huge favorite of mini donkeys. Eventually, Pino was also sampling hot dogs and cupcakes. Before anyone writes me letters of reprimand, may I say that Pino is on a strictly donkey diet of natural roughage and hay - but one birthday party and a few cupcake bites washed down with a hot dog end seemed OK. About the only thing I felt bad about was when they brought out the donkey Pinata - everyone apologized, and Pino stood quietly by my side taking it like a man. The head finally flew off, candy flew around, more squealing, and Pino had had enough. He yawned and I took the little party animal home. Not long after, I saw him in the field, laying in the shade.

As if taking a donkey to a party of five year olds wasn't enough excitement, I made my first batch of pickles and pickled beets. Yes, yes, I can hear the pickle snickers now, I did not know how to make pickles or can. So I was quite pleased with the end results, and I must say, I found the whole process really satisfying. I now have wild thoughts in my head of canning everything - or at least making jam this week as the blackberries are at peak.

We were finally getting ready for the evening relaxation time, ie wine drinking, when the fire trucks began roaring down the road heading up a nearby farm's road. There were at least 10 trucks. We ran to our side field where the our ewes and horse are, and could see the smoke in the very close hillside. All the area people were out in their fields. Some trucks had to use our neighbor farm's water well to fill their reserve truck - the trucks were there for about four hours making sure the small forest fire was out, and all was well - but it gave us pause. We had just been talking about improving our water situation this winter in a variety of ways, not only for our nursery, but for a possible fire emergency. Martyn went back to start dinner, and I tucked the horse and goats and ewes in their stalls for the nite. I told Sky not to worry, that I was in charge of protecting her from fires, and Martyn was in charge of protecting me from fires.
Posted by Katherine Dunn/Apifera Farm at 6:03 PM

Email ThisBlogThis!Share to TwitterShare to FacebookShare to Pinterest
Labels: Donkeys of Apifera, Life on the farm, Pino

OMG, I've never seen more beautiful hooves anywhere! Can you and Pino come to my next party?

LOVE the hooves! I bet Pino wants to show them off to everyone who comes by...

So, uh, do you have to find hoof-safe paint?? Are there rules about what you can use to paint donkey hooves like there are with turtle shells? LOL

ok, before anyone has me arrested for animal toe abuse, I want to point out that Pino's toe paintings are created with water pased acrylics. I also do a detailed scientific diagram before each toe painting, to ensure that air circulation still occors allowing his toenails to breathe.
Sadly, these masterpiece toe paintings only last about 2 days in our rocky climate. I can see why painting a turtle shell would be lethal, and I am glad someone reminded me of it, as I might come on a turtle out here and take it into the flock and feel like painting it with daisies also. I will not. Thanks to everyone who emailed me and Pino.

first time here; enjoyed your photos and art as well; very different from most! which is a good thing!!

LOLOLOLOL! The pinata was just too funny. This is the second time I've read your glorious post--and I'm sure it won't be the last! BTW, I'm sending Donkey Doodle Dandy out to live with you two for a while. Maybe then he'll come back a painted hooved party animal, too. Or maybe he won't come back at all! : )

Hmm - I don't think we could get the sheep to stand still for toenail painting - Pino must have looked splendid - and so patient to have small children screaming all around. Hot Dogs? Who'd a thought... Tina

P.S. - Congrats on your pickles - they look beautiful and I'll bet they'll be tasty too :-) T.

I am LOVIN those daisy toes! Pino is a real party animal!!

You always get one! I'm loving those hoofs and you can see that there is lots of breathing space - also donkeys don't breath through their hooves!

So glad the fire was put out too, how scary.