In which I lose a dear friend, a very fine cat 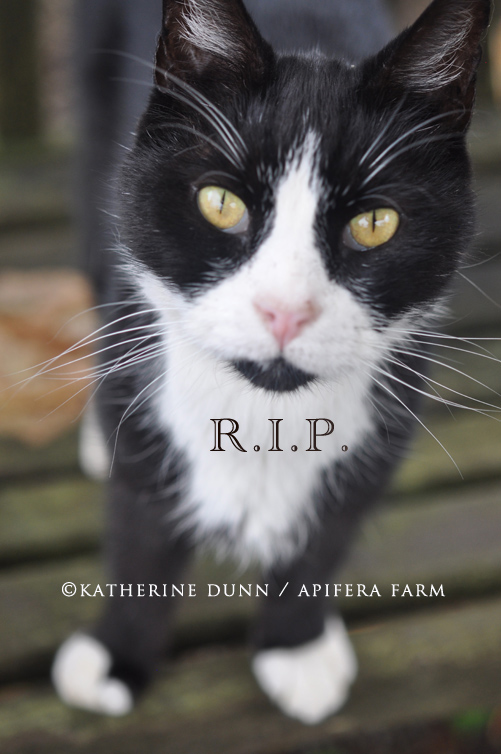 I had to say good-bye to a dear friend. A comrade of theatrics, a warrior, a thief of meat on the counter, a lover, a survivor-a cat I have grown to love very much.

B.W. was euthanized today and I told him how wonderful our time together was, how compact that time seems now since he wandered onto Apifera in 2007 with a swagger no cat has ever outdone. I had been trapping, spaying and neutering the semi feral colony that had grown to about 25, and my energy to find the correct name for him was waning, so we started calling him BW for "Black White". It stuck but he had many nicknames as such a cat with such magnificence should –

His personality and expression had grown even more entertaining in the past year after he lost a front incisor, making his upper lip cave in on one side.

Damn it, I'll miss this cat. He was one of the four privileged felines allowed in "The Big House" as they call it in the barnyard–but he always was put out at night, along with Miss Peach–only Big Tony and Itty Bitty have night time curfews.

He loved coming in for food, and lap sitting. He adored to sit on me and had a very loud humming purr. He also loved to eat, more than any of the other cats over the years, this guy loved anything–the stinkier the better. He was the only cat we've had around that would climb kitchen shelves to find a pork chop marinating and then walk into the living room with it hanging in his mouth, calmly strutting towards me like that black cat in the Loony Tunes. In fact, we mimicked that black cat in Looney Tunes as we spoke like how we thought BW would.

I've known him six years and he has come into the house with head wounds, broken teeth, blown abscesses and more-but I doctored him up and he always rebounded in style. He took my Dr. Doolittle techniques and seemed to show appreciation for each one. But this time, I had nothing I could do for him.

BW came in this weekend with a hind leg that appeared paralyzed. I assumed it was a stroke which can happen to older cats with thyroid issues. He did not appear in pain, so I made a Monday vet appointment since my clinic was closed. He was eating and drinking. By nighttime, he was in horrible pain and was ill too. He lost control of both legs, and they were numb to the touch. By morning, Xrays told us it wasn't a fracture, and other things told us it wasn't a stroke. I won't go into why we chose to let him move on, but it was a well thought out decision by me and the vet–there are layers of things going on in him, and we feel it is best for him and his quality of life. Treatments that might not help would have left him suffering at a clinic for days on end with limited positive results.

This is a cat that lives to be in and out. He was a stray that learned to survive outside and while he loved being in for certain night time communions, he loved to be out. In the past days of having in all day, carrying him into the litter box, He looked up to me like he always did when he wanted out or in–but this morning, both Martyn and I saw there was something gone in his eyes, a light had gone out. the vet saw it too. When I held him at the vet, he still looked up at me like he always did when I held him, but this time, i know he was asking for help.

It all happened so fast. But I can say this, I have cared for him well, and he has returned the favor by just being himself-the one and only Mister Magnificant–a cat that walked into a room like he was about to accept an Oscar or sign an autograph.

BW–I love you and will miss you. Thank you for coming to us.
Posted by Katherine Dunn/Apifera Farm at 1:03 PM

I am so sad. BW was a lovely boy, sweet and funny and affectionate. He drooled when you scritched his chin. I'm thankful that I knew him, and I'll miss him very much. RIP, dear fella.

My condolences Katherine. What an wonderful character your BW was. Thanks for sharing his story here in such a loving way.

awww. i feel your pain but just imagine him walking into animal heaven like that suave oscar recieving devil he is. :) that make me smile.

I'm sorry. As someone who also has several indoor cats and several outdoor cats, I know how he will be missed. I also had a sweet boy named WB, for pretty much the same reason you named BW.

Thanks everyone. It came so fast, but what a grand time he gave me all these years. Thanks for caring -