Honey, shouldn't we bring her in the house tonite? 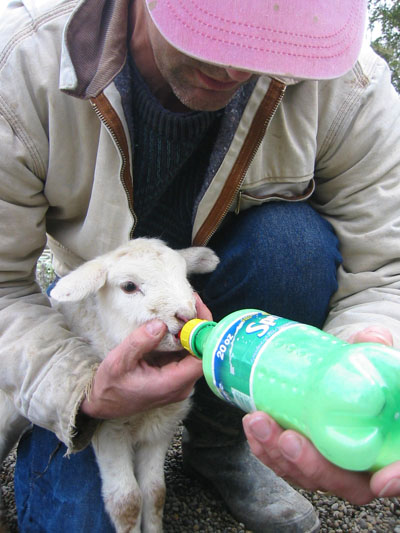 On Friday at 4pm Lewisia Pinkie gave birth to twins. It was not a smooth process from the start, as she is a new mom and the most timid of all the ewes. Around 3 pm, I saw her standing and grunting and I immediately went out to gather all the ewes back to to the barn from the pasture I had them in that day. This meant shepherding the flock over some of our property, from one fenced area to another - usually this is a smooth process with Rosemary leading everyone in orderly fashion. Of course, the one day I needed to get a ewe in labor to the barn NOW was the day that Rosie just had to have some of that spring grass, and once Rosie gives up order, all hell breaks loose- Lambs running all over, Lewisia Pinkie running around with two little feet sticking out her rear. I fortunately got her in to the lambing stall soon after, but she did a fair amount of running around and I was sure that baby was going to fly out of her for an airborne delivery. When I got her into the stall, it was only a matter of minutes that she lambed, standing up. All appeared fine, she did everything just like a pro, licking the newborns, her teets were giving milk and she was feeding both. When I checked on her Friday nite, again, all was well and the ram lamb was big and tall, getting milk; the little ewe was smaller, but looked good. All that calm would soon change. 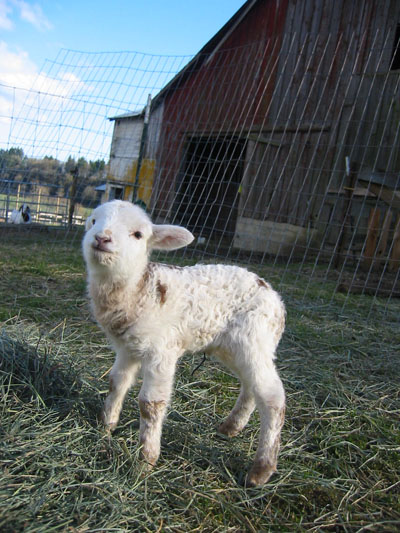 Saturday morning it was immediately apparant something was not right. The ram lamb was quite listless and just didn't seem with it. But more disturbing was Lewisia had now taken to head butting and very aggressive behavior towards the ewe lamb. She was not allowing her anywhere near her. We watched for about 20 minutes, but her behavior was so aggressive, we put up a wire fence to separate mom and baby ewe, but mom then just tried to crush her in the fence. So we caged the baby ewe and got the bottle out. I immediately consulted all my books about this, [and got loads of support from fellow shepherdess over at Donkey Dan's], and it is not that rare for a new mom to reject a twin. We tried rubbing the lambs together to reintroduce her scent, we checked the mouth on the lamb to see if she could be causing pain in sucking, and Lewisia's udder was fine. We forced Lewisia to stand still to let the ewe lamb get her milk that first day, but it was too dangerous we felt - too many big feet around little heads. We kept trying through the first day to re-graft her, but Lewisia was just freaked out by her. 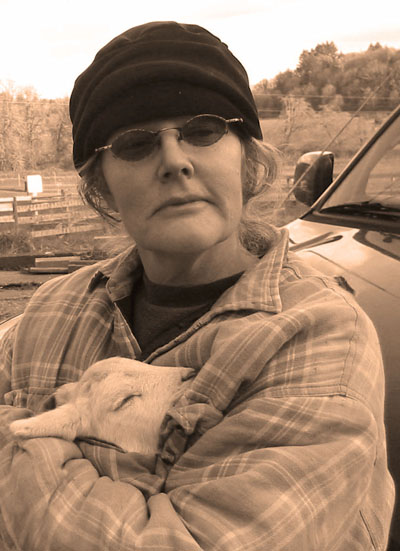 So, it was feedings every 2 hours for a couple days. It was little naps in my lap and nite time lullabys. To say I am in love with this little ewe lamb is an understatement. She now comes to me across the pasture, responds to my voice, and likes to be held in the sun. I have her in a sunny little fenced area I concoted for her, so she can be next to other lambs and ewes, have sun, but separate from Lewisia.

The boy lamb had is own problems for that first two day period. His listlessness got worse, and even though Lewisia was trying to get him to feed, he just didn't do well at it. Within the mid part of the morning, we saw him really decline. So we interfered and fed him bottles too - By the midnite feeding, he was so much stronger. He now appears on his way and his running and jumping, so is over the hump.

I am afraid I am a little bit like those people you see in the movies, who have calmly prepared lists and read many books on the baby's arrival, but when the moment comes, they walk in circles... I am getting calmer, and relize with each lambing I know more than the last, signs to watch that are good, or bad. But still, when the initial moment of apparent labor starts, I can't contain telling all the barn, "We're having a baby!!!" [as goats, horse, ram, ewes, and cats say 'here she goes'] and my pace quickens, I do a few circles and start grabbing useless things, like, empty buckets. One can always use an empty bucket though, I've found. 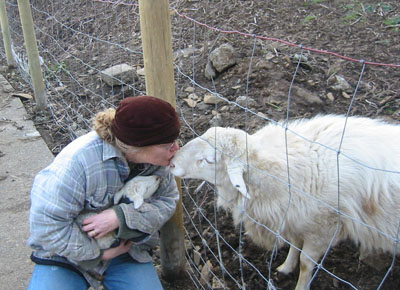 And after all calmed down, including me, especially me,
I was able to show proud Papa, Joe Pye Weed one of his daughters.
Amazingly, I got something that can melt any shepherd's heart,
a kiss from the old ram himslef.
Posted by Katherine Dunn/Apifera Farm at 8:21 AM

That is such a sweet story about how the twins were born. I am sorry to hear that momma freaked out but seems to me that in case you will make the better momma. I am sure that your empty bucket method will come in handy some day. Please let us know. lol! What a sweet kiss from the daddy. Animal kisses are always welcome aorund here.

Wow, what a story! I had tears in my eyes!
How precious are those little lambs...

I am in love with your little ewe lamb, too.

that is so touching. trying not to cry at work

what a precious tiny ewe lamb. how sweet they both are.

Oh-so love this post of yours, and indeed your whole blog. Wonderful!

something I never thought I'd see:
my dad feeding a lamb out of a Sprite bottle. She is so gorgeous.