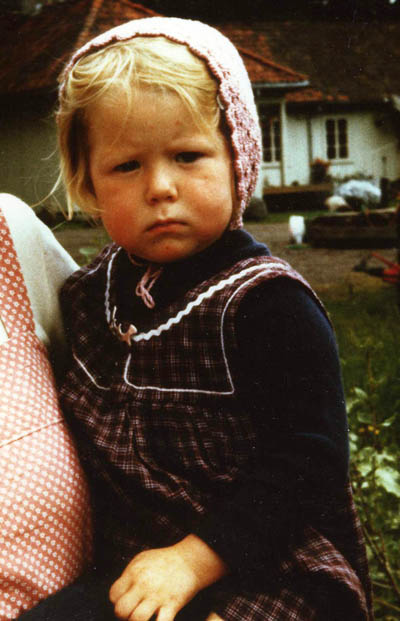 I am in a passage of late, a passage from early adultness to mid adultness, a passage that sees many faces leaving this realm onto the next one - faces one has known all their life. I've talked about this in recent posts, I think. It is a passage that causes me to think things like, when I see the face of this little Norwegian girl, "Let's see, she would be about 30 now.". I took this picture in 1981 when I spent 3 months studying and traveling in Norway - all the children seemed to look like this there, especially once you got out of the cities into smaller towns. Photographs have a way of capturing a moment, but it is a myth really, that photo is a myth. Each person that looks at it will create or conjure a whole story into that particular photo, and it might not have anything to do with what was really there. Just like we look at Garden Design magazine, see a farm somewhere, and conjure up how those people live, act, are. But it's just their persona on print. You don't know someone from a magazine, or a blog, or a series of movies. It takes a long time to know someone, and all their folds and crevices.

So, I go on my way happily, and in this passage, I play games in my head like, "When this tree is 10 feet tall I will be 75 and my parents will be gone and so will Martyn's and Huck and Billy our dogs will be gone, and all the sheep too."
If I get particularly wrapped up in this particular game, all played in the safe confines of my head - and not shared - I can proceed to freak myself out. Not because I am afraid of aging, or death. It is the idea that the world as I know it now, will be so drastically different from the perspective of the 'group on top" so to speak - I'll be entering another passage where my turn to explore in the next realm will be the next big road trip. Hmmm. So this passage I am in now, is so much more juicy than the 20's or 30's or early 40's. It is better. It gets better every year. It gets bigger and more safe in a way, understanding it really will all end 'here, as we know it". No time for whiners. Everything coming into my life seems to be sent to me to help explore and prepare for some huge losses to come. Like the CD "Magic and Loss" a '91 release of Lou Reed - man, I love Lou Reed. Or Roseanne Cash's "Black Cadillac" [a beautiful tribute] which on the liner notes shows a photo of something she scribbled on the wall - "and drop by drop comes wisdom through the awful grace of god"...

So turning 48 on Friday was wonderful. It was a perfect birthday. I did what I felt like, which is pretty much what I do everyday. But I indulged in baking my favorite cake. And enjoyed a longer moment in the barn. I got a few surprise cards and a beautiful 5 foot tall trumpet vine from Martyn, along with my favorite dinner - HOT DOGS!! Yes, I really love hot dogs, even though they are pretty crappy, I know. That'll send you to the next realm quicker, I guess. And our weekend was so full of hard work putting up our vegetable deer fence and giving shots to lambs - AND, thanks to the encouragement from Donkey Dan and his mother over at Farmgirl Fare, we managed to find the courage to ear tag the three rams {Thanks you guys!}. It wasn't so bad, for them, but I didn't like doing it. It just had to be done.
Posted by Katherine Dunn/Apifera Farm at 10:12 AM

Happy BIRTHDAY. I meant to write something for you on Friday, but got caught up in other things. I love that Lou Reed album. Like Neil, he is the 3 chord KING! You are an inspiration to me. I'll have a hot dog from a vendor on Madison Ave.in your honor!

wow....i think i'm just starting to enter that passage you speak of.....

and a very Happy (belated) Birthday to you!

A happy belated birthday to you! I loved reading this post - it made me feel very peaceful. (Not the ram tagging part, but the rest!!)

HAPPY belated birhtday, Shepard girl. Love your art and your writing. and love the fact you had hot dogs on your big day. I adore them too