White creatures arrive for many reasons...like the cat that is a nurse 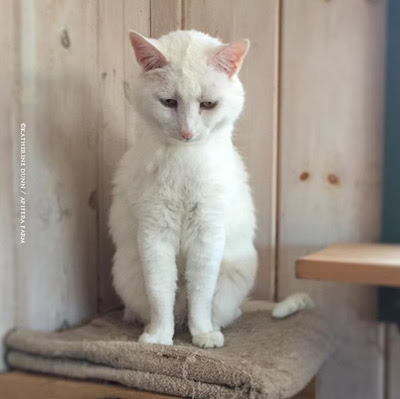 I have had a number of pure white animals come into my life-usually with magical stories that capture all of our imaginations and leave us pondering their initial beginnings. Often in the past, when I've written about them individually, someone always pops up and says,

They came for you, they are there to help you.

And this is a comforting thing to say, and hear. And I feel I can say that in each case, it has grown to be true-they do help me in ways I might not have predicted.

Of course, one of the more famous white animals to arrive at Apifera is White Dog, aka Benedetto. The story on how he got here has taken many twists and turns in my imagination, and yours. I have written about it many times so won't go into details on this post, but I can say that I do know without hesitation, Benedetto was meant to come to us for himself, to save himself...but he has also become intwined in our lives, and I rely on him here for many reasons. The obvious is he keeps the predators at bay, which right now means eagles that fly over head-he goes nuts ever since one took one of The Bottomtums. But he has another job, and that is to be pure in his intent with me.

I can't hide anything from Ben. And his eyes, don't hide much from me.

We have a ritual I've told you about-I look into his big dark brown eyes, and I say,

"Everything is okay, it is okay, right?"

I started this before we moved to Maine, during the weeks leading up to what would be a traumatic yet exciting move for all of us, and I was supposed to be the leader. I actually think I was a good leader for the animals, and Martyn, and I dealt to every detail of the trip, the move and the packing. But I would look White Dog in the eyes, and tell him, "It's okay, it's going to be okay, you'll see." I said it because I meant it, and I also knew that he and the others could pick up on the tiniest of sensations I might be emitting about stress over the move.

Now that we are here, it is so clear to me that one of the gifts I've given Benedetto, is Maine. He loves it here. He truly is in his element-the cold winter, less rain,, more snow...and he now has his area to protect, and Marcella has hers. They still come together when I let them have wolf play dates, but he is much more his own man now.

All the worry I had, wondering if White Dog would try to find a way to escape once in Maine...is gone. He has never tried, and out West, he would occasionally bolt on us. Not now. I would not put it past him, but he is just more settled here. Perhaps it is just the time has passed-we still don't really know how old he is so maybe he is just more mature. But I believe he is more,

in and of himself, something any of creatures wants, and needs to blossom and thrive, and be at peace.

And there is Noritsu. I saw his face on the shelter's website, and I couldn't shake it. He was actually at a shelter slightly farther away than our local county's shelter where all the elder cats have come from, so I pushed it out of mind. Then a couple other cats came our way, and I thought, okay, Noritsu was not meant to be with us.

But I went back, maybe two months later, and there he was again. And I felt compelled to adopt him, and I did.

I'm so glad. Because Noritsu has a very important job-he is a nurse. Not only does he nurse the cats that I must nurse by standing with me and reaching out to them, but he nurtures me. As I sat holding Laci as she was clearly dying, he came to be with me, immediately...Nurse Noritsu.

Oh I can hear the naysayers. He's friendly. He'd come to you no matter what, he just likes people.

No, it's more than that.

We don't know where Noritsu came from, we don't know anything about his back story, except that he is elderly. Perhaps he nurtured an elder man until their death...perhaps he had other elder animals in the house too. But when he came to Apifera, he checked it all out, sat for a couple days to get comfortable, and then...he just started being a nurse.

I like seeing an animal's true purpose coming through, and being utilized even in their older years.

My sweet nurse, Noritsu, you are very important to me. And you, White Dog, it is okay, isn't it? 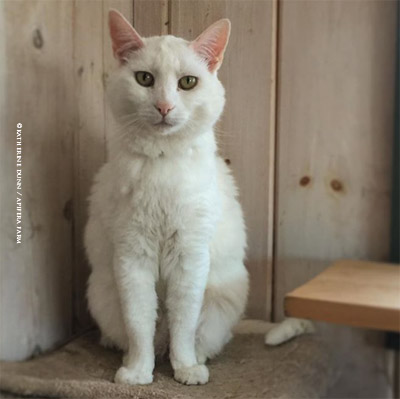 That is truly a magical cat. I fell so in love with him the first time I saw him on your FB page. I even had to show my whole family his picture. Something about him... I just love him. Peace to Laci. I have bookmarked your blog... thank you for all your posts.

That you Misty! By the way, I visited your blog and your images are truly beautiful, I urge others to visit there.