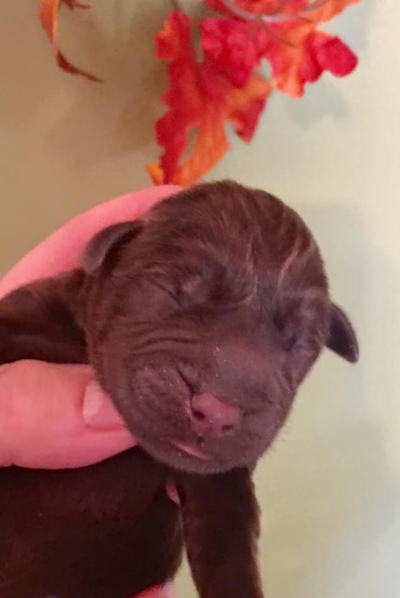 I want to tell you a story.It has some magic in it.

When Hughie died this year, it was heartbreaking, but I had the honor of living with him for four years after taking him on when he was nine. I knew our time would be short like that-like it is with many of the animals I’ve taken on over the past 15 years- and he left a huge hole. We lost Huck at age 12 a couple years ago, leaving Muddy, Huck’s younger brother with us. Muddy turns 10 tomorrow. Any death in the pack brings a shift, and it also opened me up to what was next. This time, I did not set out to find another old pug. I knew in time, maybe, one would come along. But I was hurt, and I realized…I didn’t want that at this time anyway. I also wanted a legacy for after Mud dies, and he is aging now. I realized what I wanted was a pup, a chocolate lab male pup, to train and become another regular traveling ambassador of love to elder visits.

Well, I started looking for a pup a couple months ago. Many were out of my price range but I keep looking and finally found someone I liked and felt good about. And pups were due in the fall. So I put a deposit down and had first pick of a chocolate male. Now if you know genetics of labs, basically one parent has to have the chocolate gene, and 25% of the litter could be chocolate. Once I got attached to the idea of walking my little chocolate love ambassador around the elder home, I realized how disappointed I’d be if there were no chocolate males in the litter, and I’d have to wait. I was already attached to the thought of those pups in the mother’s belly, and we knew there were six. The breeder was supportive and told me…she thought it would work out. The due date came and went and we were on pins and needles. Finally, seven days past due time, I got an email, with the photo you see below. The first pup out, a chocolate male…this image was on his birthday, I swooned. I have never bought a pup and seen them at birth like this. It was both exciting but also made me want to rush out and get him. Well, the breeder wrote me again later the next day to say he had been the only chocolate male.

You know I have a close relationship with optimism, magic and the power of imagination. But I just sense this little guy made a point to me. He is ready for duty.

I am very excited to work with a pup again, it has been a long time. I love my elders. I also have buried a lot of them since 2004.
Posted by Katherine Dunn/Apifera Farm at 8:13 AM

Email ThisBlogThis!Share to TwitterShare to FacebookShare to Pinterest
Labels: Dogs of Apifera

What perfect potential in that sweet face. An Adventure indeed! Lucky you.