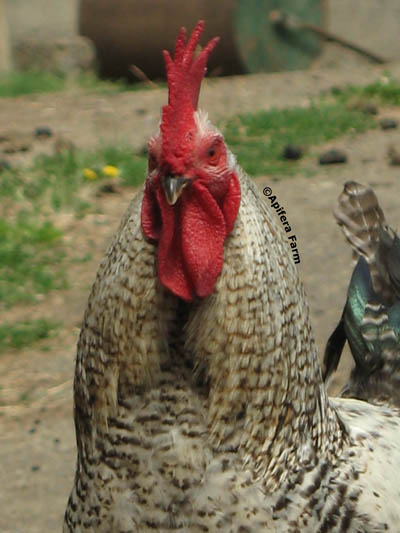 While Papa Roo remains as the head rooster of the hen house, Ward has crossed the line into 'pampered adult cockerel". As one crosses the line from 'owning' a rooster, to 'loving' a rooster, there are consequences. Ever since Ward's battle with Papa Roo, brought on by Ward having blatant chicken sex with one of Papa's hens, I must now separate Ward out at night from the hen house clan. Ward has it pretty good - a 12' stall in the sheep barn, complete with windows. Since Ward really isn't part of the Papa Roo flock, he has developed a flock of his own - consisting of the barn cats, Frankie, and the donkeys. Ward even does the classic rooster dance around Frankie in the morning [roosters do a funny circle dance around their hens, to announce to everyone, "Hey, this is my lady, hands off."]. 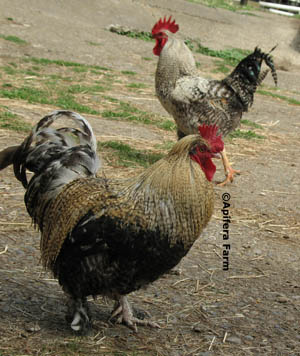 Nightly feedings have become complicated, as Ward wants to partake in not only the barn cat dinner, but also the sheep and donkey repasts. If getting a two year old to bed is hard, just try a rooster on a nice evening who thinks he's a cat, or sheep, or a donkey. Every night, I prepare strategies to win the game of "Pretend I'm Not Trying to Catch Ward". Now in the dark, or subdued light, catching Ward is easy. But free roaming Ward, enjoying the cool late summer sunset, is a different game entirely. Ward has a variety of moves to put the NFL on watch. Some nights, I confess, I have let him roost with the cats in the hay bales. I don't like to do this, fearing the barn owl will get him, but at a certain point after a long day, catching a rooster, even a loved rooster, loses it's appeal. 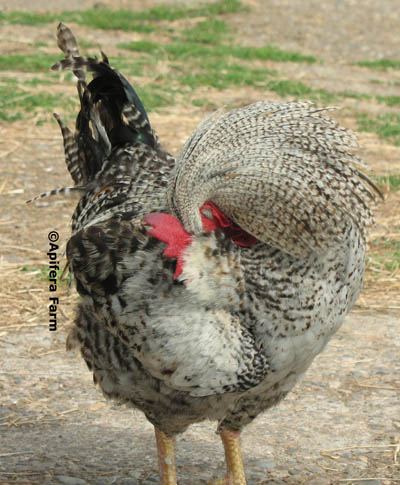 Yes, I love the damn rooster. Holding Ward when I do catch him, is very nice. Each sound he makes is an individual code or word. He likes to have his claws supported, and his ear flap rubbed make his eyes shut. I have learned that while sitting holding a rooster, rubbing his head and eyes brings him to a comatose state of relaxation - to the point that he can feel so relaxed that he ...well, let's just say I've learned to strategically locate his rooster rear so as not to promote droppings on my pants. [Another reason aprons come in handy].

I will continue to love Ward, and I will not cull him out of our farm. He will never be a stew. Silly as it is, his charm brightens my day.
Posted by Katherine Dunn/Apifera Farm at 12:43 PM

Ward is his own flock!

I have a banty hen who contributes nothing to the flock. She sits on the other hens eggs and squeeks instead of clucking. She's always getting into trouble and she always seems confused.But I love this little hen and she needs our protection. She will never be given away or be dinner in our house. I really understand what you're saying.
I really enjoy your blog and read it everyday. I hope you will stop by mine sometime to see Squeeky and all the other animals on 3 dog farm.

My chicken MISS PLUCKY used to get so constipated because she'd get into the dogs kibble...she'd gorge herself>She'd eat anything. She loved to be carried also....holding those big feet in my hand (claws away from me) and being rubbed all around her head. I never knew chickens had such personality. Your Roosters are just beautiful.

The type of life you are living is probably the best way to live. A friend of mine used to have fifty chickens in NC Appalachia before she moved to Alaska. She also grew a garden, but traded eggs for grapes, apples, greens, etc. I have a gardening page on knolstuff that is just focused on Florida, which is where I live now, and my gardening endeavors here, including volunteer work with the USF botanical gardens, the neighborhood butterfly garden, and the Rare Fruit Council.

Check out the article on urban chicken farming on www.rebuildusanow.com...