The fields are alive with love making 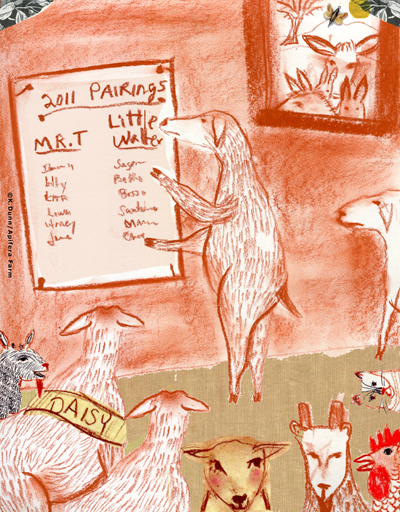 As I entered the old barn, I looked up to see three separate groups of ewes. I looked at the list of names on the wall that I had posted, looked down at Frankie The Head Troll, and asked her if she had anything to do with this. While she didn't admit anything, nor did the sheep, I suspect it went something like this...

It was that one day of the year that was filled with a mix of emotions for the ladies, their anxiety blanketed in their always calm faces. As each one proceeded up to the list of names posted on the old barn wall, the others waited patiently to see who they would spend the next 45 days with.

Little Walter was the new guy in town, having arrived in spring as a young 5 month old ram. He was exceptionally handsome, dark haired with white splotches. He was also young and calm, very gentle, or so it seemed.

"There is nothing wrong with Mr. T, girls," said Lilly, mother to Betty and Bessie, "so just be willing and able no matter who you get. You have a job to do here, we all do."

"But it sure is more fun to flip your skirt for the handsome ones," Betty whispered. And they laughed to themselves.

"Mr. T has the oddest haircut, too, but he's okay," said Daisy. "But I miss Joe," she said calmly. And all the older ewes sighed when they heard his name. She referred to the one and only, the great fornicator, Joe Pye Weed, the farm's first ram, who had done his job well and was now living in Idaho fornicating there.

"I'm glad I'm retired from it all. It's not the same since Rosie died, and without Joe, I've lost my drive." Daisy was now the herd matriarch and was done having babies, free to graze and eat and sleep.

Olive Oil was a very small ewe who had been born to the farm's first matriarch, Rosie, who died several years ago. The shepherdess decided not to breed Olive since she was so small, but had a real fondness for her and vowed to always keep her in the flock. She was loved. But one year Mr. T was so enamored with Olive, he jumped a fence and made love to her in the morning dew. Months pasted, and the farmers forgot the incident since Olive never looked pregnant. But one late spring morning, long after the others had lambed, the shepherdess found Olive Oil away from the flock, with two little lambs suckling her, a boy and a girl. She considered them sacred, and named the young ewe lamb, Jane, and found a good home for the boy.

"I'm never on it either," said Jane. "I'm virginal forever."

"We'll tell you all about it, Jane," said Edith, a virgin herself at one year about to be paired up for her first breeding season. Edith had arrived a year before, from another farm, and was a striking ewe, big, brownish black with white splotches. Everyone knew she was brought on board for her looks and strength and she was very respected in the flock. There had been many discussions among the flock, even amongst the chickens, about who Edith would be paired with. Even the donkeys wondered.

"I just want good babies." said Edith as she stood in line.

Just then, the Head Troll, aka Frankie, came scuttling in, and announced,

"She's on her way! Prepare to to separate into three groups - the Mr. T's, the Little Walters, and the virgins and retirees!"
Posted by Katherine Dunn/Apifera Farm at 12:48 PM

LOL, i needed that tonight. Put a smile on my face for sure!

I actually snorted when I read this! Thanks, Katherine.