The countdown to stories unleashed 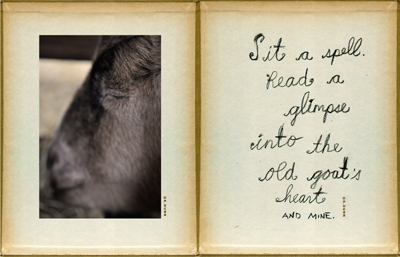 The stories from "Misfits of Love" will have a life of their own. The words of each story, printed on paper and then bound in a book, will be yours to mingle with, ponder, and retain meaning or inspiration of your own.

There are 32 days left to gather more pledges, with 29% being funded. Thank you to everyone who has pledged. There is a lot of legwork to do to get more pledges but I feel very strongly that I want these stories out there, in print, to be held.

It's easy to pledge. Your money is held [your credit card is not charged[ and only if the project is fully funded by the deadline will you be billed. Gift levels are spelled out at my page on Kickstarter where you can also read more on the project and see a movie.

But for now, I am posting one story [click "Read More" below] from the proposed book. It's an important one, as it is about the first old creature of Apifera, Old Man Guinnias. He is over eighteen now, and every year I hope for another, if it is meant to be.


"Old Man Guinnias"
a story from "Misfits of Love"
by Katherine Dunn © K.Dunn art/text
no duplication without permission

[intro page]
The first senior creature to be adopted by Apifera Farm, Guinnias has acquired a loyal national following that keeps him supplied in animal crackers for his own personal consumption. Arriving at Apifera at the age of 15, his original family had sent him off to a goat rescue in his old age, bothered by his daily trips to their front porch. His feet had been badly neglected which slowly crippled him over the years. Old Man holds a very special place in the barnyard hierarchy and in the farmer’s heart. While she recognizes that no creature lasts in body forever, the idea he will move on to other realms seems hard to grasp. With the old goat entering his 18th year, she has been known to say only to herself, “Maybe he won’t ever die.”


“The complexities of another’s life are what led me here, “ the old goat said to me.

He was thinking of the young boy that had raised him for 4-H over some 15 years ago.

“He adored me, but adoration is much more fickle than love,” he paused, “and fleeting.”

Conversing with a goat can be a brief encounter, a passing by of “Leave a few apples on the tree for me, please,” or it can be an ongoing dialogue where information is extracted slowly, over time, days even.

The morning sun had soaked into the cement retaining wall by the old barn for at least an hour. The old goat hobbled to the wall and pressed one side of his body against the warm grey stone. His front shoulder is bent from crippling and his feet are turned on their sides from neglected feet of his former life. Any movement requires a shifting of good legs to bad, creating imbalance, but quick head bobbing always seems to get him steady again.

Guinnias’ 4H boy quickly learned that a bike got him farther than a goat, and the bike eventually was replaced with a car. The car took the boy to new places, places where he could fish, or dance, drink beer or be a boy without a goat.

“I would have traveled with him, but he never asked,” the old goat said.

I sat in silence with him, he chewed some cud and I watched the wind dance with the chicken feathers, first slowly spinning them, then with a quick box step or a dramatic tango dip.

Arriving at Apifera Farm at the age of fifteen, Old Man Guinnias was the first elderly creature to be adopted into the barnyard and was welcomed by the century old arms of the barn. He spent his first day under the watch of the Apifera sky, surrounded by chickens, donkeys and a horse in the near distance.

“I remember my first night here,” he said. “I felt shoreless, a boat without land.”

He slept that first night in his own semi private suite - with fencing separating him from younger goats for safety, but allowing nose sniffing for comfort.

Even though crippled, he held himself with dignity, like any elder statesman with a past of accomplishments and personal experiences to fill a book. Like any keeper of secrets, the feelings and memories he had tucked away deep into his own skin and heart could bring him acute moments of loneliness.

“They usually come to me in the morning, after dreams have left,” he told me.

His boy had left home for college and the parents eventually drove the now old goat of to an goat shelter and left him there, saying to the management, “We just got tired of him coming up on the front porch.”

“If they’d asked, I might have considered sunning elsewhere,” the old goat said to me.

Old Man sat with his sagging eyes looking off into the tree line, stoic but with a sense of melancholy. His expression reminded me of something my father said nearing the end of his life,

“You get overly sentimental when you’re an old man because …” but he couldn’t finish the sentence.

The old goat’s given name was Guinnes, like the beer, but when he arrived at Apifera it was apparent he was much too dignified to be named after hops.

“Most people don’t take time to commune with the creature and hear the name inside them,” he told me as I announced I had altered is name for him.

“Guinnias”, his slightly revamped named, pronounced “Guinn – ee – us”, conjured up an image of him walking the hillside in a tweed jacket with leather elbow patches, carrying a walking stick and going ever so slowly, stopping only occasionally to watch birds through binoculars.

“He never came by again after he went off to college,” Guinnias said, speaking once again of the boy that reared him up from birth. “He must have had reasons why he didn't return for me."

Abandoned in old age, his main crime, besides being old, was for frequenting the front porch to seek out sun, and perhaps companionship of any kind, be it cat or human.

From a distance, the wind chimes on the front porch tingle and sing in the wind, making the old goat’s ears prick forward.

“There were sounds like that in my old home. Such a light, gentle sound, I like it,” the old goat mused.

He now had everything he needed in his barnyard - food, and shelter, and earth soaking up the sun to be his warm cushion. He had companionship when desired but also had a private retreat for naps or deep thinking during cud chewing. He partook in the daily and nightly barnyard routines and in time he gained confidence that this daily routine was now his world, it was how he would live out his years.


“I fall more now, it’s those rocks that get me sometimes,” he says with an uncomfortable glance. “Getting old is not for sissies,” he summed up.

He’s an old goat, but he’s a lot like any elderly person left behind, or shuffled off to live with a distant Auntie without being asked.

Old Man Guinnias has outlived many of the younger elders of Apifera. Certain creatures, both human and animal take on larger than life proportions – Gandhi, Buddha, Kennedy, Secretariat – and it’s shocking when they really die, no matter what their age. Each year as a new winter emerges, I wonder if this will be the winter his body will finally fail him. But each year, he plods on like an old vet and reminds me I’m not in charge of anything. Could it be, he won’t die? It just seems so strange to know he will.

When one of his barnyard mates is ill or breathes a final gasp, he‘s in the background, taking note of the procedures, smells and sounds. He stumbles through the vines of the pumpkin patch where someday he too will lay along side comrades of goat abandonments.

“Please face me toward the sun, and place my ear tips in a way so I can hear the sing song of the barnyard,” he said calmly one day as we harvested pumpkins.

The wind chimes rang in the distance again, perhaps reminding him of the warmth of a front porch of yesteryear, but he did not look wistful. He had everything he needed on this side of the barnyard gate.

----
If you'd like to help this and the other stories of "Misfits for Love" closer to being published, please pledge at the the Kickstarter page. Thank you to all who have helped so far!
Posted by Katherine Dunn/Apifera Farm at 10:57 AM

Katherine, you have such a way with words -- this story just touches my heart. Thank you.

Oh my, how you've captured the essence of what I believe every cast away animal must think... tears in my eye.