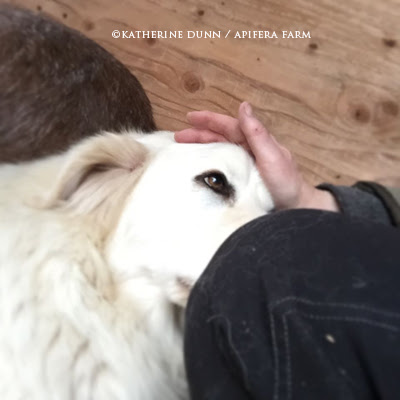 When I do my morning chores in winter, I make it a goal to commune with the animals, usually picking out one or two that day and just sitting with them quietly. Often no words are spoken, that is my language, but we have our other language we speak-or at least we learn to interpret. I think the animals are far superior to that interpreting than we humans, but I truly believe we as people can hone our lost sills as communicators with creatures. We used to speak this way in earnest, and with grunts that each had a different meaning I assume. Just like the pigs-they have so many variations of a squeal and a grunt. I should start recording them.

This morning I sat with Marcella while the goats ate. Marcella is a glutton for this. She is not 'soft' either-meaning she has not turned into a marshmallow guard dog as we used to hear of when we researched guard breeds. Marcella has adapted to the new place as stoically and enthusiastically as I expected. Her area is smaller now, and often at night she is in the goat barn where as Benedetto is always free to go to the fields to patrol, but he lives in the field barn, and Marcella lives in the front barn.

Marcella takes her guarding here as seriously as she did in Oregon. She recognizes the front road and traffic that might be 'unusual'. She knows the nearby neighbors but will still alert them she is here. But mainly, she has taken to guarding her charges from birds, and squirrels, and eagles. She witnessed a duck killing of a chicken in Oregon, and from that day on both she and Benedetto will chase birds in the high up sky and alert us there are flying predators. I doubt a squirrel will do much harm, but I appreciate that she has that covered. She also has kept the rats away, at least out of sight. They had easy living when we arrived, but things changed for them with Marcella. I often find small holes dug into the stall bedding, going about 6" down. I'm sure she's tracking rats under the barn.

Now two days ago, we saw a beautiful little black mink by the bird feeder, which sits outside the kitchen and is not part of the barn. As beautiful as he was, I worried he might be on to the chicken coop even though they are penned up, he could get in if he really wanted too.

I told Marcella about him.

"What am I saying," I told her today, "I'm sure you knew all about that mink."

She is strong and independent, in command of her domain. Her success has nothing to do with beauty but is from her genetic makeup and willingness and desire to be useful in her breed's capacity. But her beauty is apparent, and watching her guard, or take charge, I have to admit her looks enhance the experience for me. She understands our relationship–something we both have had to work towards.

Her eyes still mesmerize me.
Posted by Katherine Dunn/Apifera Farm at 9:41 AM

Email ThisBlogThis!Share to TwitterShare to FacebookShare to Pinterest
Labels: Dogs of Apifera, Life on the farm, Marcella