Sadness, shock...and only one survives 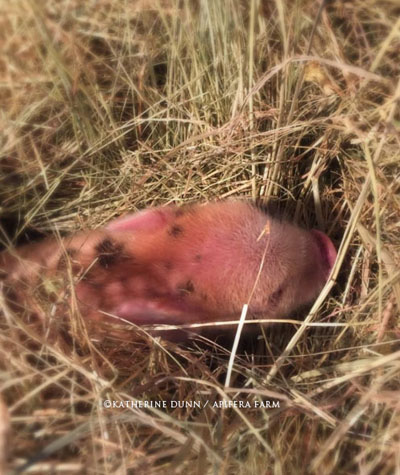 I didn't put the heat lamp on last night, I take full responsibility for that. But I don't like having those things on unless it is absolutely necessary due to fire danger. And since she was eating so voraciously, I didn't think it was her night.

Arriving at her stall, I saw a piglet up and walking. But another two lay nearby, listless. They were dead, but dry–two beautiful girls, beautiful polk-a-dots like their parents. I was really upset, but wanted to attend to Cornelia and make sure she was okay. She was hungry and had just passed the placenta. She lay down for me and really just wanted to sleep. The little survivor piglet seemed okay, but sort of breathing funny, and even though he was warm, he was trembling a bit in his rear, but that is actually sort of normal the first day of life as they aren't strong yet. She had milk, and he could suckle, but I did notice she hadn't bagged up that much.

I started to clean up around Cornelia, and then I found four more dead piglets-all beautiful girls. I was warned way back when by a friend who raises pigs not to have too much bedding in the farrowing area, because piglets at birth can get buried in it and then can't get out. I had made sure there wasn't that much, but had to leave enough for warmth. So I wonder if they got buried. I don't know. But 6?

They were good sized, and healthy looking, full term, and she had cleaned them off. This could mean they were still born and she cleaned them, or that they were alive but got chilled. It was very cold last night about 5 degrees, but she is in an interior stall.

I couldn't believe it. We've never had even one dead piglet - which is a miracle and it is bound to happen, but six out of seven... I sat on the ground with Cornelia, and cried for her. She had worked so hard I'm sure, and did such a good job, and then they all died, or were dead. She was unconcerned with the dead babies so had accepted nature's hand. It was I who was carrying on. I try not to create drama around the animals in these times, but, I was caught off guard by so many being dead.

But then Cornelia was acting kind of weird and I wondered if she was okay. By the time I came back from my other feedings, she was eating her fresh hay and seemed more normal.

The six little sisters are all together in a row, just like they would be if they were sleeping together. I will have to bury them on Monday when the ground is a bit thawed. It's hard to look at them, but I sent time petting them and wanted to admire their beauty, even though they didn't make it.

I feel so sorry for the little barrow. He seems ok, but I'm worried he might not make it. And since he is a loner, there is more chance Cornelia might accidentally crush him-every pig owners fear.

What a sad morning. I'm proud of Cornelia, but sad for her hard work, all alone.
Posted by Katherine Dunn/Apifera Farm at 9:14 AM

Email ThisBlogThis!Share to TwitterShare to FacebookShare to Pinterest
Labels: Cornelia the pig, Grief, Life on the farm, Pigs

Deepest sympathy for you and yours, Katherine. ♡

Oh that is so sad! I'm sorry for you and Cornelia.

Painful. So sorry for such sadness.

Wow ... so hard for you all! This period of still-winter but hints of spring is really such a hard time all around. Will be thinking of little piglet boy ... he must have some feisty in him, so fingers crossed it all turns out! Take care. xo

Such a sad story. I feel so sorry for you all. Sending a big hug.
Jessi