Sometimes I'm afraid...then I get up 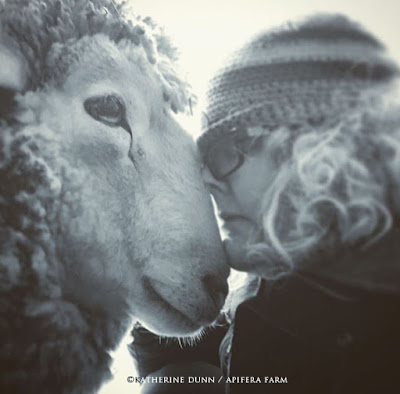 I am not sure why, but lately I have been having feelings of fear when I wake up in the morning. Not panic or anxiety, just thoughts come into my head, like,

What if Martyn dies? What would happen if I died today?

I don't know what is underlying these thoughts. I guess it feels like the same way I felt when I took a new job in NYC in my twenties, or went off to school for the first day as a first grader. When I was younger, I didn't have the skills to work through these things as well as I do now.

I have a very good way to deal with these thoughts. I think them, mull them for a few minutes. And then I get up.

I remember when I lived alone in Minneapolis. I lived alone most of my adult life, always preferring to have my own apartment or home. I had two boyfriends in all the years I was a single woman and they were only around for a year...although both of those breakups caused me great pain. I let the first grieving go on way too long, I hung on in so many ways...including trying to maintain a friendship. I know that is how I had to deal with it at the time, but I think seven years went by before I began to really move on. By the time the second person had come into my life, and ended our time together, abruptly, and in a very secretive behind the scenes way, I did grieve it, but I remember waking up and thinking, I'm not letting this grief or this person hold me up for as long. And I didn't. The latter was also not a very honest person, so it was a different kind of feeling during the grief.

I see women my age or older lose their husbands and I wonder if I would get through it. I remember some well know scientist in an interview, forget who, but he lost his wife and best friend after 60+ years of marriage, he was now alone at about 90, and still working. When asked how he was coping, he said he had lots of good things in his life, including his work, but when his wife died

"It kind of took the fun out of everything" he said.

I can understand this. So much of my time with Martyn is spent laughing. He is really funny. We just really enjoy each other. He makes my days brighter. We spend a lot of time together. In winter, from November through March, Martyn is here on the farm working and helping take care of the snow, maintenance and all sorts of things. He is the main chef too and our meals together, breaking bread, talking about the day, our plans, visions, are all wonderful, juicy things of life together. We come up with ideas, and then bring them to life, together, each one with a separate set of skills to see it through.

When I'm with my animals, I feel whole. When I was hurt, confused or lost in my youth, or other times in my life, animals and my relationship with them and Nature, got me through. So did having my parents around, they were best friends too before I met Martyn. But touching and working with the animals keeps me grounded to Earth, the place I am meant to be now, in my evolution.

But I don't know what I would do if Martyn died before me. And I guess it's a 50/50 chance. And I don't like to think of him without me. Don't worry about something until it happens, they say. Sage advice. And I'm not worried. I am simply stating...I'm aware of this thought that pops into my head lately.

I'm not sure, like I said, why this is popping into my head these days, more so than at other times. Maybe it is just the uncertainess [for me and many, that is] of the global world and our chaotic administration. Maybe it is part of the transition into my 60's. Maybe it is because Martyn just ended his winter-at-the-farm-routine and his days are now off the farm working with the landscape crew. I am perfectly content on my own during the day, my life is busy and full. I do not spend my days mired in fear. I'm not seeking advice.

I just am acknowledging the recurrence of these thoughts. I like to think I would go on with gusto [at some point] and that the animals, and the land, farm and my art and writing are what would get me through losing my best friend.

I guess...you just do your best. And you have to determine what the best is you can do each day when you are faced with a big loss. It is your own way, not another's. Nobody has the right to tell a person they aren't getting over something fast enough. Nobody has the right to tell another person they aren't grieving well. The person that gives an opinion to grieving person telling them -even though they have not asked for advice-that they could or should have done something differently while the dead person was still alive...is cruel and narcissistically informed.

This photo was one I took yesterday of me and Calla, one of the elder flock members. I just love the look of her head, so big, almost like it is out of proportion, but it is so like her, to come to me and lean into me and we just can sit that way for many moments. I had no bad thoughts while sitting there with her, no worries...and if I had I'm sure they would have been lifted, even if temporarily.
Posted by Katherine Dunn/Apifera Farm at 11:02 AM

I am 75 and lost my husband after a long illness 22 years ago...I was alone, but had a job that depended on me, as your animals do you..we are strong women, we country women, and will carry on as best we can...different , maybe, but it gets done...

I'm sorry for your loss, even though long ago...I remember when my uncle died, at age 62, he was a life time farmer and had been married 44 years and his wife sat at the table after the service...and she quietly said, "it's gong to be different."

I have that thought every now and again, so I wonder if it is an "age" thing. I am 54 and just quit my full-time job. I wonder if I could manage everything on my own if I had to. To think about it and perhaps make sure you have a will or some plans in order is a good thing. Dwelling on it is not. But I think you have that covered.

Hi Lin, I think 'change' brings this feeling up for may of us. You are going through a big change...Maybe Martyn going back to his regular work day landscaping away from the farm is what riled it up in me...For me, this is isn't about a will [yes we have one] I think it is more about very deep, long time abandonment issues we all might have, just from being born out of the womb...I goes I'm speaking for myself. Good luck in your someone transition!

Well this year has been a doozy. I hit the wall of loss, from the view of bring 65 the age my mother passed from ovarian cancer. I kept thinking this was her age this is what it felt like only she had to face the reality of her sickness. That was sooo hard she suffered for 3 years and was not on good terms with dying. So when i turned 65 it just all came back to me. I took to my bed. And fell into the depression hole of loss, almost like before, when i mourned her death.
Now i just have to accept the health issues of a now 66 yr old. However i live on 10acres with my beloved in a canyon in utah. Laughter is the best medicine.
I sooo admire you and all you have accomplished and continue to do. What a great human being you are.
ps. i think these feeling you are having and these thoughts are coming from the fall you had last year, if martyn is not around during the day you just need to think and do those things with a friend not alone. Its just accepting that we have new limits and its ok.
my best

Hi Nancy, it is so interesting to see how events in our lives, milestones, can trigger things, and it is good to understand that, to help us get through them. I understand how this would happen to you, and I hope you are crawling out of the hole and looking at NAture for sustenance-and laughter, yes, laughter! I think you might be right about the fall, I think I have some unfinished business with that whlole thing and am looking into it all...almost a year later....