A llama love...I guess we all needed that

I get a lot of requests from people, often strangers, or people I haven't met, to come and see the animals. Sometimes I can accommodate them and sometimes I can't. It's always a fine line between hurting some one's feelings and creating privacy or time for myself when I need it.

I follow my heart and gut when I respond to these requests. Or I ask Earnest what he thinks.

"Perhaps they will rub my belly," he says.

When I had a polite request from Laura Wooten, a painter and artist from Virginia, if she could stop in for a brief visit, with her son, husband and elder dad-they would be driving through after a wedding in Bar Harbor, I immediately said 'sure'. For starters, I often find connections I make with fellow artists are supportive, and second, Laura has been a kind and generous follower and supporter of both my book projects, and my animal efforts. And, well, she is The Bench Fairy, who gifted us a bench this year for our 'trying to make it happen' garden-animal area for elders to come visit.

It was going to be hot, and humid. I forgot these folks are from Virginia, so the wimpy humidity we had this weekend was nothing like they are used to. It is easy to work as a freelancer, or independent goat-donkey-cat-chicken nurse caretaker and have days where you feel isolated or unheard...invisible. Not that I want to be on the street or news or top ten blog list of notoriety, not that I ever have an urge anymore to 'do lunch' or coffee...it takes a real desire to leave my haven, and walls, but when someone shows up and they are just really excited to meet you, and see the many animals they have read about for so long-it makes me feel good about what I'm doing.

When someone notices all this work we do, and gets an emotional connection to it, and genuinely shows that, it feels good. It's validating.

Her family could not have been sweeter. We took lots of photos together, and I've shared some of hers here too. First we went through the orchard Misfit Goat area, where they met-immediately-Ollie. How can you not meet Ollie immediately, as he is the immediate greeter. Off in the paddock, they saw a dog, and said, "We want to meet White Dog."

Of course, everyone wants to meet White Dog. He did not disappoint, and if he wasn't 95# and so loving I would have had him out with us-he likes to jump and 'hug' people around the neck, something that is endearing, but also a bit too much for safety reasons-he's getting better though. Marcella was in her private suite with Earnest, and she is a bit more problematic with guests, unless I take time to bring them in, do introductions and watch her closely in the introductions. She's only doing her job.

Then it was out to meet the grumpy, sleeping pig. Due to the heat, the pig was uncharacteristically somber, while sleeping. I rubbed her belly and got a few snorts, but we didn't want to disturb the royal highness's state of mind. They got to meet one of the many rats too. We went to the back paddocks to see the donkeys. But the first one at the gate was...Lady Birdie. She immediately sniffed them all out, face to face, and agreed they were not black bears, wolves, coyotes or...mean people. Birdie is once again showing us she seems to be the current heart throb, but also, she seems to be the current resident who really thrives in these greet ups. She not only gave light pecks on the cheeks, she gave full kisses this time.

I was also pleased that Matilda wondered out on the hot day. She wasn't getting the attention of Birdie, but she seemed very present to me, and I told everyone her story. Soon after, she lay down and did a good roll in the dust, which is always a hit. Pino was greeted too of course, as were the other donks, and Boone, and scampering, or limping, goats. Back at the front barn, We met the pigs, and the elder cats.

The one thing I regret, is that I didn't get to spend more time with Bob, Laura's father. He was so sweet. I'm a sucker for old men, what can I say. It was hot, and Bob decided to sit in the shade with Martyn, where he could look out at the animals and fields, and garden. I had told Bob that my father's name was Bob, and that we now were trying to help bluebirds and I call the blue birds, "Bob". And while he sat there with Martyn chatting about fishing and other things, he got to see Bob the bluebird fly into the birdhouse. Martyn told me later Bob really liked that because he hadn't seen a blue bird for many, many years.

Laura and I both kicked ourselves for not getting photos of her dad with some animals, but neither of us wanted to force anything, and it was so hot. So she sent me this photo taken at the wedding they attended [in which Bob had surprised his sister who was helping put on the wedding, and she had no idea he was coming and so wanted for him to come up from Virginia, and they pulled it off!]. I think you can see what a good soul he is, as is Laura and her family.

So, sometimes, many times really, it is good to say 'yes'. I think that in the 16+ years I've been doing this, with a public presence on the blog and elsewhere, I've had a couple visits that were not good ones, or felt forced or out of character, where I did not follow my gut to say 'no'. But I'm also learning that even in high humidity, saying 'yes' can really fill a lot of hearts, including mine. 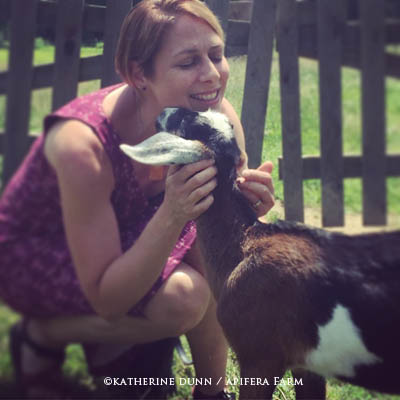 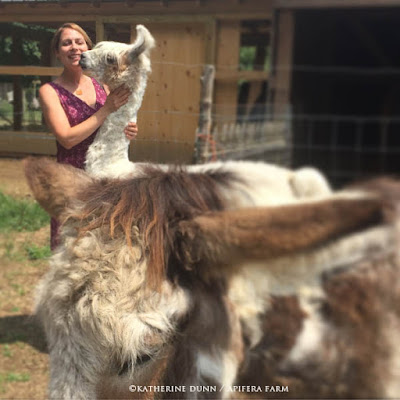 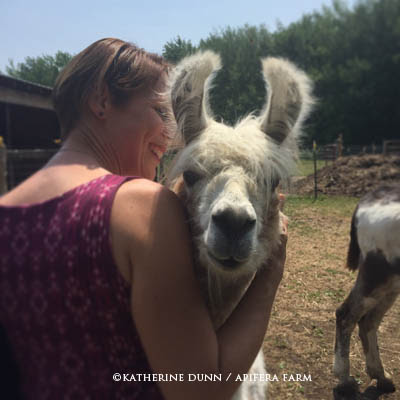 Posted by Katherine Dunn/Apifera Farm at 10:24 AM

I can see that was a joyful visit all around.