A love story: tall blind lady and a short man 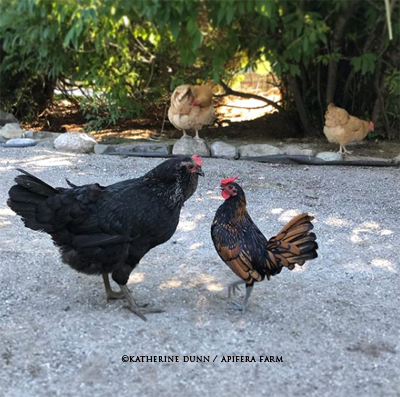 I can't make this stuff up.

There seems to be a new couple in the barnyard. On Thursday, I brought home two cats, as well as, a Bantie rooster who had been left at the shelter. Banties are a small type of chicken, and we had many out West, including Papa Roo, our very first rooster who lived well past ten.

But Seabrights are really small, about 1# each full grown. I decided to give him a home here, as our old rooster, a beautiful Barred Rock, was so aggressive with the hens, and me, that he had to be culled [and many of you know the lengths I went to to try to make it work out]. I felt a Bantie would not be as aggressive, and actually I worried the hens might beat him up because he is so small.

Well, it appears that Misfits find each other. On his first night, I had him secure in a hutch, amongst the hens so they could meet each other, but safe from overzealous introductions. The next morning, I let him out, and when I checked on the hens later that morning, I found him shadowing Henneth, the blind chicken. I thought that was sweet, but each time I check on the hens, there he is with Henneth. They eat together, and spend their days together. I suppose this might change, but for now, I think it is a wonderful love story, and a story of friendship.

"Don't let those other hens bug you, they are a bit full of themselves," Henneth told the new rooster.

"Yes, that one is very sassy," the rooster said. "I think you are beautiful."

"Thank you, are my feathers looking in order?" she asked.

One of the Buff Orpingtons saw the odd couple conversing.

"You'll need a ladder with her," she laughed.

Henneth walked away from them, and the little roo followed.

"They know not what they speak," she said.

"My intentions are honorable," the rooster said. 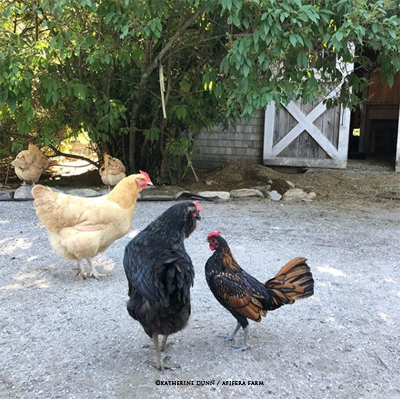 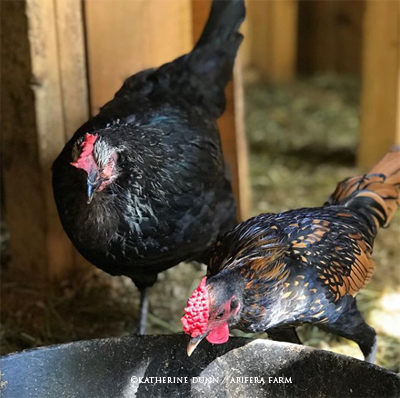 Posted by Katherine Dunn/Apifera Farm at 9:22 AM

This is such a beautiful beginning. I look forward to more of their developing story. I had a seabright hen once. She was flighty but beautiful. I'd love to have one again someday.

And this is why I love your farm.