Opie goes to the sea and meets new friends 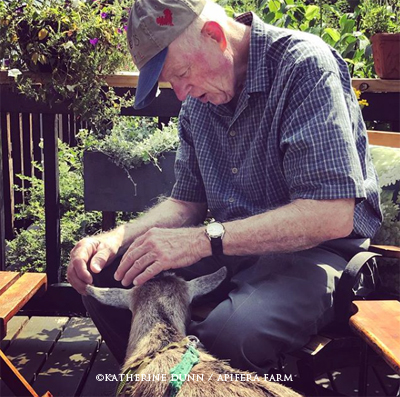 Yesterday was a big day for Opie, and me. We drove an hour and a half down to Harpswell, a beautiful area on the sea here in Mid Coast. Our destination was The Vicarage by the Sea, a private home for dementia elders. It is nestled in the woods, with open spaces for their gardens and views of the sea.

I had somehow stumbled on the place somewhere online, and was attracted by their philosophy for person-centered dementia care, and how they believe in allowing residents to explore nature, and animals are also considered a therapeutic entity. There is not a lock down mentality here-locking doors to keep residents 'safe' does not happen here, instead, because of the high staff-to-resident ratio, residents are encouraged to wander if they need to [supervised] and go on short walks out side. They have a trail they call "The Freedom Trail" where residents can explore. One of the residents had just done such a walkabout when I was there, and she came back with a smile and enthusiasm in her face and voice.

I have never worked, per se, with dementia people except for mild cases in my family. So this was a stretch, a good stretch, to put myself in. The care manager and staff were just lovely, enthusiastic not only about their jobs, but the residents, and as importantly, about Opie and what we are trying to do here at Apifera. I want to work with people like this, that truly value animal related therapy, and demonstrate they care by telling me.

There was a gentleman there who I sat next to when I first arrived, and he held some small rocks in his hand. I asked if he collected rocks and he said he did, and he spent a lot of time petting Opie. But what I noticed was how deliberately he stroked Opie's back, not in a over handed way, but in a very intentional way, with each stroke making an impact on him, and the goat. I believe in the power and healing of touch, and I think many people are afraid to be touched, or touch others. Some of us did not grow up being touched much as young people or adults. So I found it very moving to watch him touching Opie. And i think having these animal encounters allow people to touch when they might not do so otherwise.

I also really liked the way the staff spoke to the residents. They did not talk baby speech to them, and I recognized they were letting the people be who they were, people with memory lapses, but there wasn't this need to control them or correct them.

I don't know if they will remember us, I doubt they will when we return, but it doesn't really matter. When you are there, they are with you, they are getting something out the moment.

We are planning to go back in the early fall, hopefully with Martyn in tow, and the llama and some other love ambassadors. The staff was all for it.

And then, I had promised little Opie he could visit the sea. He has seen the cove here from our property across the way, but never the giant sea. He reads about it in Earnest's books. So after our therapy visit, we ventured only about a mile down the road, and there it was, on both sides of the road, vast and full of big and small vessels. But what was even more spontaneous, we noticed a young woman in a wheel chair, with two older women. They were clearly celebrating something. I wondered if I should approach them with Opie, thinking they might get a smile from that. I hesitated not wanting to intrude. But they called out to the little goat. I asked to take a photo and they agreed [I didn't feel right putting her face in this post] but she was all smiles. It was a brief interlude for her, and me, and Opie. Of all the places I could have pulled over I somehow stumbled on that one. It was s gift for all of us.

So that was the day the little love goat went to the sea. 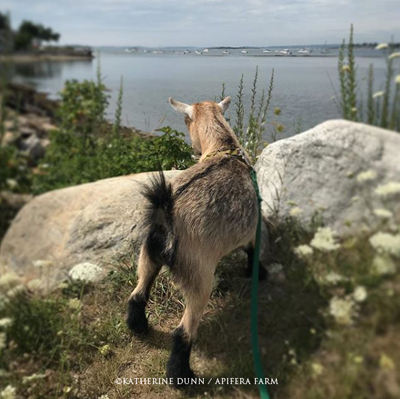 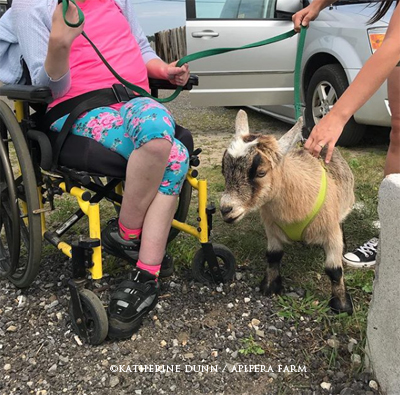 Posted by Katherine Dunn/Apifera Farm at 9:04 AM

Very cool. On all fronts.