We lose an elder...the beautiful Assumpta 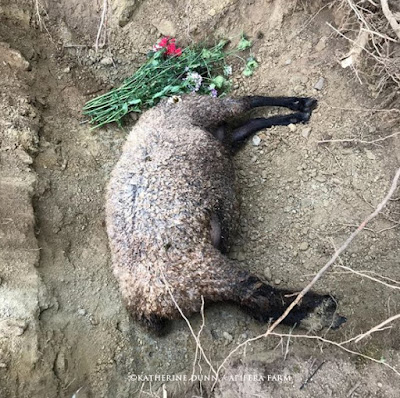 I had to go work on a downed wire in the field this morning. It was only 70 but ninety percent humidity so I was focused on getting done as soon as possible. I had let the sheep and Birdie out of their paddock where they stay at night, and fed the equines. It was all routine. I wasn't paying too much attention to anyone, and then I realized,

There is a sheep missing...Assumpta...

I figured she was hanging low back at the barn due to the high humidity. In the past year, I've noted she is laying down longer, and more. Sometimes she doesn't get up to eat her hay as quickly as she used too. I knew her life was probably more like months versus years. Sheep are very good at carrying on until one day, they don't. It would be a deadly thing for a sheep in a flock to act sick. They are programmed to stay alive, and stay with the flock for security from predators.

I headed back to the barn to check on her, Martyn was close behind working on other projects. And then I saw her lifeless body in the distance. I knew she was gone. I cried out to her, and ran, but she was dead. By her appearance, we think she died early evening. There was no sign of distress from her body, and there were no marks on the ground indicating she had been pawing the dirt. I like to think she went to the back corner to be on her own, to sleep after the sun went down, the ground was probably cooler in that area. Maybe she just dozed off, and never woke up.

Just last night when I brought the girls up from the field, they were panting. Sheep can't sweat, so pant. Assumpta was there and I scratched her chin and told her to hang in there, the weather was supposed to be cooler in a day. I'm so glad I had that brief interaction with her. Assumpta was not one of the more personable sheep, she was like a stern but fair matriarch that didn't need a lot of hands on attention. She was a Blue Leicester cross and had the most beautiful wool. I have yarn from last season, and still have to skirt her fleece from this year. I will have to do something really special with it.

I let the sheep wander over before we dug the grave. They of course already knew she was dead, as did Birdie. As Martyn dug the hole, I picked her a bouquet, and White Dog examined the dirt and hole. We laid her body in the grave, covered her eyes, and buried her with earth. And White Dog sat with me the entire time. Martyn placed one large rock on top, and White Dog marked it as we were leaving.

Don't worry, I'll keep my eye on the grave, was his intention.

I was sad, but also relieved for her. I knew this winter would be hard on her, and she picked a good time to die. She won't have to deal with biting flies and heat, and we could bury her quickly so she could be on her way. I always feel the burial is an important part of the spirit's journey, it is the final goodbye of those of us left behind, and until we let go, they can't totally be free for the intensity of their next journey. That is what I believe.

I went back to the house to cool off, and came back out about an hour later. White Dog was in the shaded barn, and I sat with him, we did our eye to eye conversation without words, and I took the photo of him you see below. I started to leave, but he put a paw up to hold me in my position. I took this to be a simple statement from him,

And of course, it is.

Thank you for your beautiful wool, Assumpta, I am honored we could care for you in your final years. 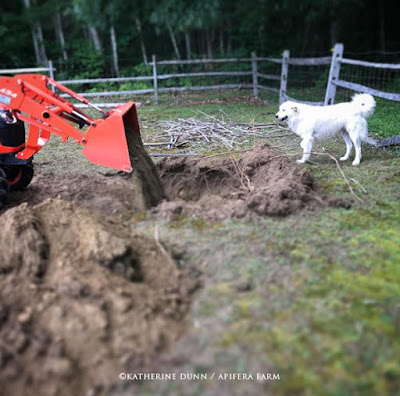 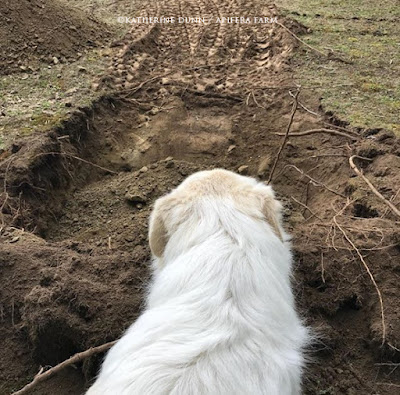 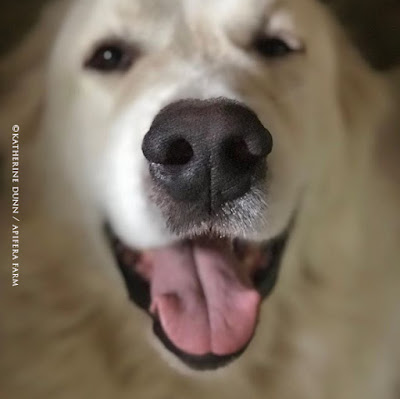 Sorry for your loss but I understand, it is a good thing too. She was ready.


Beautiful last thoughts and moments of her!