Earnest the Pig: In Search of E.B. White 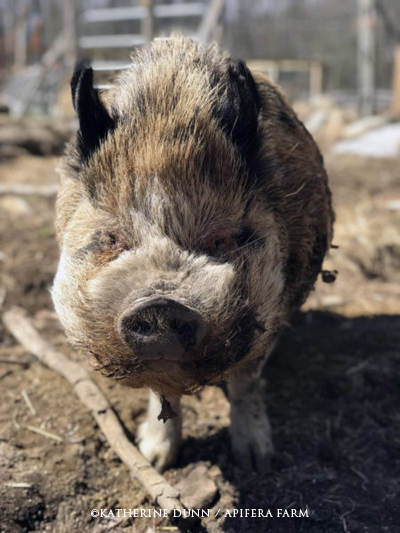 {This article first appeared in the June, 2019 Lincoln County Maine News in my monthly "Tails & Tales from Apifera Farm}

Earnest the pig has settled into his new house. White Dog, the llamas, and the sheep often nose him through his fence and he can see the goings-on of the entire farm. As a very manly pig, with all his manly parts still attached, he lives in his private retreat with a stone wall that keeps him from making night visits to his old lady friend, Eleanor, the retired sow. I have explained to him that he has evolved from the career of spreading seed and is now free to eat, nap, and sunbathe.

I have begun to decorate Earnest’s house. I told him I will find the right accessories that fit his unique Earnest personality. So for now, he has his flag and a painting. He suggested a photo of his mother, but I never knew his mother so am afraid that won’t work.

“Then maybe a portrait of E.B. White?” he asked. To this day, Earnest thinks that E.B. White still lives. I tried explaining the facts, but he refuses to believe them and insists someday he will in fact meet Mr. White now that we are in Maine. When Earnest heard we were moving to Maine from Oregon, he wrote Mr. White and was disheartened to have the letter come back.

“Perhaps he is camping,” Earnest said as I showed him the returned envelope.

Earnest first grew enamored with the author when, as a piglet, I read him “Charlotte’s Web.” Earnest knew very well about pigs being eaten, as he was born and raised on a working farm. He didn’t judge meat eaters; in fact, he and his family often ate meat scraps. He just was proud someone chose to make a pig so front-and-center in a book.

“It just doesn’t happen much,” he told me.

I also found Earnest with a road map of the Maine coast and he had circled the town of Brooklin, and it is a well-known fact Mr. White had a beautiful home there. In fact, he had ripped out that page of the map and tacked it to his wall.

Just the other night, as I was closing up the barn for the evening, I could hear Earnest in his hut, snoring away after dusk had hit the land. I opened his gate to take a peek into his house; he is quite endearing to watch sleep. I suppose since I never had children that watching my pig snore brings something out of me. I noticed there was a new addition to the wall –- an old black-and-white framed portrait of Mr. White.

“Now where did that come from?” I muttered quietly. “Hmm.” And I turned to leave.

I closed the gate as a breeze lifted a discarded envelope into the air, fluttering around until it landed at my feet. It was addressed to Earnest, another fine pig. There was no return address, but the postmark was from Brooklin, Maine.


Inside Earnest's private hut
Posted by Katherine Dunn/Apifera Farm at 8:48 AM