The long goodbye...but what a gift

At a routine vet visit on Tuesday, I found out the Muddy has terminal bone cancer. I had him to the vet to see about getting stronger arthritis meds for him, but the vet immediately looked at his new bump on his front leg elbow, which had come on about 3 weeks ago, and wanted to do an xray, and I assumed it was all arthritis related since that was his gimpy leg. I knew by his face when he came out with the xray.

The option of putting a near eleven year old dog in surgery and removing his entire front leg right up to the shoulder and then doing chemo, all to get him another 6 months [some live a year or so]...well, I didn't even question it, I was not putting him through that. The vet agreed. I know there are examples of pets making it another year or more, but I want quality not quantity for him.

I'm heartbroken. And shocked. Just envisioned another couple years of Gramps and his puppy friend.

I asked my vet if it was his dog [he has a lab] would he put him down right now? "No, take him home and let him live his days out...but you guys have to prepare yourselves."

He said it could be a week or weeks or maybe a couple months. He didn't seem to feel it would be a year. He said that in most cases [most] when the lump is visible it already means the cancer has spread, and the next organ effected will be his lungs.

I've never brought a dog home to live out the final days or weeks. They have always failed and needed to be put down for one reason or another. I have never had the uneasy feeling of waking up each day and looking in the big brown eyes and knowing what I know..."You my friend, are dying."

I remember when my father was in home hospice. He started hospice in January. He died in late March. Leading up to the final days, I remember my mother -who I talked to every day- saying,

I think in my experience when I know an animal is failing, and I keep trying to help if at all possible, there is a point of clarity that you have done all you can do. The animal has probably let go, and it is time for you to let go.

If I see anything compromising, I will act. Any breathing problems, any signs of depression...for now, I love on him double. Muddy always comes into my room after Martyn leaves at 6:30. He makes these sweet talking sounds, always has. I smoosh him, his chocolate ears are so soft. I tell him I love him, he knows. Then he follows me into the bathroom, more talks...and on and on. At night we help him onto the couch, he can still do it but he's getting the royal treatment.

He still is eager to get up. He still loves his baby bro. He still can be Muddy.

When he can't be Muddy, he will cease to be himself.

But it is a long goodbye.

Just as I feel Bear came to me to help John, the elder gentlemen who got to be Bear's first and favorite therapy contact at the elder home [he died in March], I too think Bear came for me, for us, not only to be a transition after Mud's death, but as a transition for Muddy. When Huck died at age 12, we had only been in Maine less than a year, we still had a younger Muddy who then was only 6. Muddy was vibrant and alive, and even though they were blood brothers and it was hard to lose Huck, Muddy helped. He played, and cared for old blind Hughie. In a very short time, Muddy took on the role of elder. He seemed to age overnight, about a year ago, his face greying earlier than Huck's did. Now I wonder if he had the cancer even then. He couldn't do his moves with his frisbee, and now plays tug of war instead of running. He sleeps a lot.

It also does not go without noticing that about a month or so ago, we noticed that The Goose was pecking and preening Muddy's feet and legs. I thought it was The Goose noticing the arthritis, but now I think he could sense the cancer, or at least the pain it must give Muddy. The Goose is after all our resident intuit.

Long goodbyes are especially exhausting, for everybody. They are limbo land. But, if you told me I could have had another month or so with Hughie to ease into a goodbye, I would have taken it.

This is a gift.  Even though we new Muddy would not live forever, the knowledge that his days are shorter than we thought means each day is like a new theatrical play you have been waiting to see forever come to the stage. Each day, he will show up and I will watch him like he's Marlon Brando performing at his peak. Standing ovations each night.

So I will relish, although with a lot of sadness, this long goodbye....with my beautiful chocolate boy. And he has taught Bear a thing or two. And Bear will stay on ...and run and jump and do all the things we have watched first Huck, then Mud, do. The chocolate legacy. 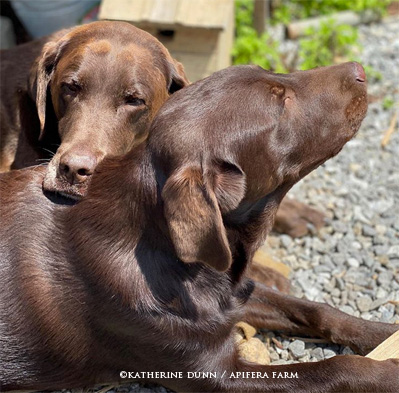 Such heartfelt words filled with love & wisdom & gratitude and sorrow. Such a beautiful life lesson is captured in what you have written Katherine. I am so glad I know you, so glad you've entered into my life space. Jason knew a thing or two when he told me about you. I think he knew how much I would need your solace, your wisdom, your compassion & your friendship. You have enriched my life in so many tangible & intangible ways & I am so very grateful.

Oh Lorene I wish we met in a different way, but I too am grateful...Jason was way ahead of himself...a comet in the sky

The chocolate legacy, yes, it is. It is hard beyond words to see them go and Muddy sounds very dear. I like how he talks to you when he visits you each morning. Sending you and Mud a hug.