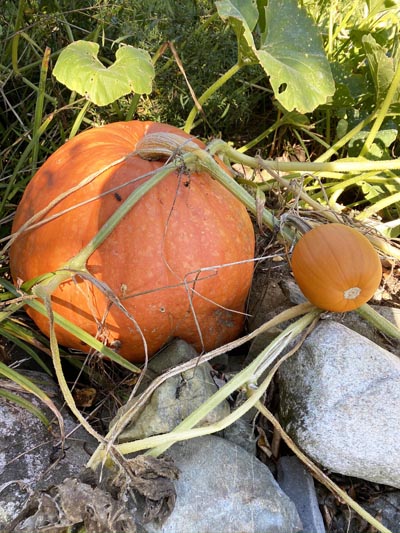 It was Pickles and she was very upset about something. She was telling to me from over in the pumpkin patch.

When I got to the mounds of beautiful orange orbs, all different shapes and sizes, Pickles was standing next to a very petite pumpkin.

“I need to put this prayer flag up over my pumpkin, “ she said.

I somehow managed to attach hay twine-every farmer’s wonder cure- to put up some old rags for Pickles to make her prayer flags.

“The prayers from the wind will help my pumpkin grow strong and big, like Earnest’s pumpkin, “ said little Pickles with confidence.

A few weeks ago, just as autumn was in the air, Earnest sent me a note, slipped under the front door as is the main means of communication from the barnyard. He wanted to tell me that this year he thought he might really have a chance at winning the local pumpkin growing contest. My heart sort of sank. I knew the winning pumpkins were huge and that many farmers devoted lots of energy to grow them.

I wandered out to Earnest’s hut. He was in mid morning repose, reading.

“Earnest, I think maybe it would be better to just grow and enjoy your pumpkin. And besides, the pumpkin festival is cancelled this year because of the virus,” I said.

“They are still having weigh ins, read it in the paper,” Earnest said.

Of course I knew this but I was contemplating lying to him. Instead I tried another tactic.

“Let’s have a barnyard contest! I will post a proper entry form in the barn later today, “ I said.

“What will the winner get?” Earnest asked.

“Well, you get to keep the pumpkin,” I said.

“Well of course. But I would like a cucumber grilled cheese sandwich from Eider’s” Earnest said. If you follow along you know that I turned Earnest on to this after bringing home some leftovers.

Later that day, three pieces of paper slid under the door, all entering the pumpkin contest: Earnest, Pickles and The Teapot.

And not too long after is when I found myself helping Pickles putting up her prayer flags.

“Pickles, you have a lovely pumpkin and not all pumpkins will grow like Earnest’s. I don’t want you to be disappointed,” I said.

“I believe in Pickles Power!” She said.

Just then The Teapot, a bit stout, came over to examine her pumpkin. “Her shape is much like mine,” she said.

And then, Earnest arrived. He had a bucket of items and began placing them around his pumpkin-a few little ceramic creatures, and some peanut butter on sticks.

“These will protect my pumpkin," he said.

“Earnest, I think the peanut butter will attract rodents?” I asked.

“I’ve spoken with the rodents and we made a gentleman’s agreement–they stay away from my pumpkin, and I put out peanut butter sticks for them. That reminds me, can you get me more peanut butter, crunchy, not stirred?” he asked.

Posted by Katherine Dunn/Apifera Farm at 5:32 AM