The honor of the death doula 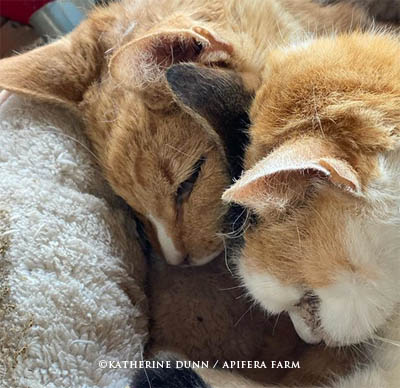 Can you imagine if nobody talked about someone's upcoming birthing process with the mother-to-be and her family? We should talk about death more, as a process, not as an ending, but a process. Doulas are becoming more and more prevelant in our society. Years ago, our communuties were the doulas. People died in their homes, surrounded by the generations. My mother told me many stories of relatives dying in the home, while children went on with life, buzzing about the home. I always felt being able to die in one's environment, with the sounds of life in the distance of people and music and things we know, is the good death–like falling asleep as a little girl while my parents continued to laugh and sing with dinner guests in the nearby dining room.

I had not buried Twinky as planned due to weather so today I put Herman with Twinky in a soft bed and buried them entwined together. Herman started leaving yesterday even though his cold was okay he just was fading. His hind end was worse than arrival and his eyes had sunk backwards-another sign (for me anyway) of the transition.

I held him a lot yesterday and told him he was safe. I checked on him again at bed and he was sound asleep but his little paws were stretching in the final movements of a body with an already released soul. Maybe he watched Twinky just days ago and felt sure he could do this too. This morning he was just where I left him. I think Herman was really, really old and I think he just knew he could let go. How much longer would he have lived in the shelter? I don’t know, but I do believe some animals once out of the shelter can relax and let go if it is their time. It was Herman’s time.

There have been many losses one right after the other but...it is what I attract-due to my intention. My intention is to shelter the souls that need help in the end, just to feel safe and warm...creating a space for them to let go, if and when they are ready.

Last night we watched some James Bond movie. I lost interest and was tired. When I went to say goodnight to Mister Mosely, I knew he was not going to make it much longer. I don't know if it is days or weeks but doubt it is months. We were encouraged when the jaundice went away, but we also know he either has cancer or a tumor or something, but we will never know for sure-we will not put him through a specialist, and my vet said even if we wanted too Mose is not up to surgery. He is becoming more letharci and sleeps most of the time. There are other signs. But last night, I talked to him and told him he could go. It took me awhile to say it as I've care talked him so much in the past month. I've had time to adjust to the reality. And when you caretake anything or one, and you see their true self decline, it is part of the process of letting go as the caretaker. As long as he is comfortable, he can continue to sleep and be in transition. More than anyone, I hope he dies in his sleep, in his little cubby.

I got into bed and let myself cry, and then sob. I had not done that for awhile. Martyn came in and thought I was having a bad dream. But I told him amidst my soft blubbering that it was just everything, Herman, Mosely, all of them, the pandemic, the election...it was all too much.

But up with the sun we were. And I cared for the bodies of Herman and Twinky. It was a beautiful, but a brooding sky...much like the personality of the current America we live in-there was change in the air, but there was fear, and trepidation and anger...but also some light behind and beside the darkest sky clouds. I watched cloud after cloud roll and form and merge into one another. 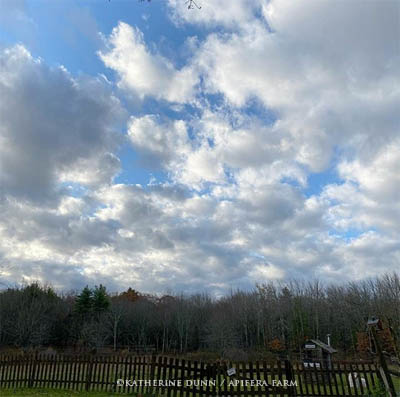 Posted by Katherine Dunn/Apifera Farm at 9:25 AM