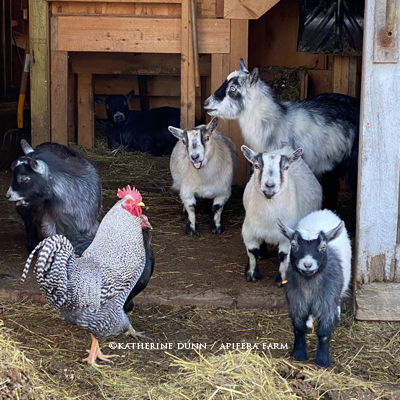 “Mrs Dunn! Can I borrow some flour?” asked Pickles.

Earnest the pig yell from the barn, “Two and a half cups!”

My instincts kicked in and I grabbed a rake and pretended to tend to the newly unfrozen leaf pile near the barn.

“How many eggs do you need?” asked Mary, one of the hens who had begun laying regularly with the longer days.

“Oh my, I’ll have to get some from The Secret Sisters then,” and she strutted off to the coop.

“Make sure you are reading it correctly, Ollie,” said Aunti Bea, one of the elder lady goats. “Baking is a precise science.”

“Six eggs it says, but only the whites, and it says we have to whip them into stiff peaks,” said Ollie.

Earnest put a bucket down with watered down pig pellets. “Ok, now we put the butter in,” he said.

“We don’t have any butter,” said Pickles.

“It will just be crumbly without the butter,” said Earnest. “But now we need to put the milk in.”

“We don’t have any milk,” said Pickles.

“Milk is just a liquid to hold it all together,” said Earnest. “We can use water.”

The Goose stepped in and offered his bath water out of his rubber dish.

“Thank you, Goose, that will work,” said Earnest the pig.

“We don’t have any suger,” said Pickles

“Granite dust will be a good substitute,” said Earnest.

I took my leave to go to the mailbox and upon returning they had a bucket full of mixed liquid with floating pig pellets.

“We didn’t add the salt. Or the baking powder,” said Ollie.

“We don’t have an oven,” said Pickles.

They all looked at me.

“No, you are not using my oven. May I ask what you are trying to make,” I said.

“It was your birthday yesterday and we wanted to make you a cake,” said Earnest. “Would you like to taste the batter instead?”

“Well thank you for this loving gesture, but I want to share it with you, help yourself,” I said, and Earenst dumped the bucket of goop and they ate it right up.

“How old are you, Mrs. Dunn?” asked Pickles.

“I think turtles can live that long,” said Earnest the pig.

“It sure is a big number though,” Pickles said.

“The moon is billions of years old and it seems fine to me,” said Ollie.

Posted by Katherine Dunn/Apifera Farm at 8:41 AM