Lemon lets go...but we are happy for him 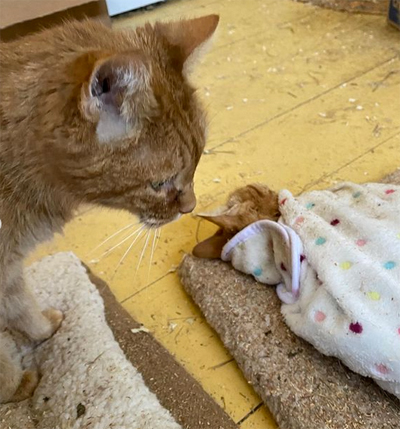 If you follow social media Apifera, you already know that Lemon died Sunday. I entered the cat suite that morning and Walter was at the door but Lemon was not in his normal place and out of site.

The day before I was holding him and Walter came over as usual to be at my shoulder-I told Walter that Lemon was going to die soon-his feet were cold and his ears too. I sang a little of that old James Taylor song “so close your eyes you can close your eyes it’s alright...you can stay as long as you like.” I asked Walter to help Lemon feel it was safe to let go. I figured it was days not necessarily hours. He was so thin though.

I'm actually happy for him. The fact he was able to open up more in the last month -partly due to transitioning but also because I do feel he gave in. The fact I could hold him and be with Walter-that was a gift to me. He gave me all the gifts in the last month. He had a very, very strong spirit to have continued to live in his body like that.

I think I might write a story about Lemon and Walter at some point. The old grumpy man letting go, the scared one finally accepting touch...to be touched like he was in the last weeks, to sit with Walter in my lap...I feel it was a gift for him, but also for me of course. But to have held out all those months [since May 2019] and not allow me to touch him, to hiss each time-the energy that took must have worn on him].

Walter is fine. He is actually doing things he didn't do when Lemon was alive. he is coming tot he door more to greet me, he wants to ride on my shoulder all the time, he jumps off his perch to be on the table while I prep food, he comes to the window to look in while i am in the feed room. he seems lighter and happy, and very much bonded to me. He too is getting thin, nothing like Lemon, but I try to keep the weight on but he is 19.

Someone on IG asked me if I had ever written about the fact many of the animals here die naturally. I wasn't sure how to answer, and didn't [I have learned in the past years of social media it is not my job to answer all the questions posed, and I don't anymore]. There was nothing wrong with the question. The fact is, many animals here are helped on their way with a vet. Every caretaker has a comfort level. My feeling is I want the animals to die naturally if they are not suffering. I have seen suffering, when a vet can't get there, it is not pretty and very upsetting. I have done things I didn't think I could do but when we farmed I learned a lot about death, transitions and what is humane and what isn't. Some people think a bullet is more humane than euthanasia for livestock or equines. In some ways I agree-if it is done properly- and sadly some people I've seen boast about it on social media are not those I'd allow to do it but they think they do it just fine [anyone that has a dying lamb but has to tie it to a tree, and then shoots not one properly placed bullet, but FIVE into that little lamb does not know what they are doing].

With the old cats, the stress of taking one to the vet in my opinion is often way too much stress. I regret taking two of the old cats in to the vet when I knew they were dying. One of those cats did die, with me, at the vet, but he had to go through a night in a cage there. I felt pressure to take him, due to living so openly online. But I wish he had died like Walter. I have taken old cats in- like Big Tony-he needed help, and he was 20. Mister Mosely was able to sleep most of his final days and died with me peacefully. So it is not that I am against it, it is simply on a case by case situation. And of course, things can go wrong quickly. I know people that rush to the vet when a cat has the sniffle-that is their right and their comfort level and their budget, I have nothing bad to say about that. I just approach on a individual basis.

Lemon, I did my best, and I also know you did your best, and I am glad you could just be yourself and do things in your own way.

Posted by Katherine Dunn/Apifera Farm at 8:50 AM

You are right with these animals. Wish there were more ppl who had your wisdom.