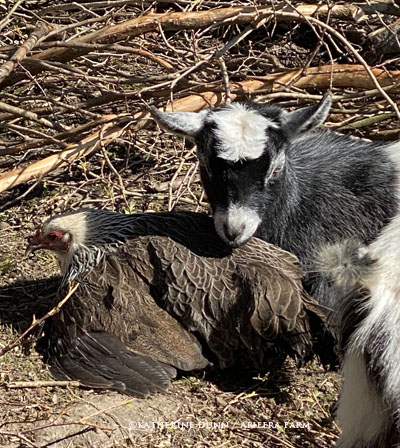 “It’s Marta! She’s sitting on her egg and won’t get up!” Pickles said, alarmed.

“Well, I suspect she wants to be sitting on her egg, Pickles. She is broody,” I said.

It dawned on me that this was going to be one of those talks, the talk every adult must have with a youngster at some point, even if it is a little goat.

“She wants her egg to hatch into a baby chick,” I said.

Pickles’ mouth gaped open. She went screaming into the barn.

“Everybody! Marta is going to pull a chicken out of her egg!”

“Pickles, did you not know chickens come from eggs? It is time you understand these things,” the pig said.

“How did the baby get in the egg?” Pickles asked. The barnyard gathered around Earnest, waiting on his every word.

This ought to be good, I thought.

“First, you need a lady chicken, and a man chicken,” Earnest began.

“I say, I say, that would be me, I am the man!” said the rooster. The hens rolled their eyes.

“Can the rooster make me a chicken baby?” asked Pickles.

Muffled snickers were heard in the group.  “No, Pickles, you are a goat, so you need a boy goat,” said the pig.

Pickles turned around to look at Ollie, Jim Bob and Roscoe–who looked sheepish.

“Those chaps can’t help you, Pickles, they don’t have the right parts anymore,” Earnest said.

Pickles looked confused.
Earnest went on, “Boys are born with lumps, and the lumps carry the magic sprinkles that goes in the lady to make the baby.”

“Do you have lumps?” Pickles asked.

“In fact, I do,” said the pig, and he graciously turned around so she could peer at his backside.

“But Ollie and the other boy goats don’t have lumps anymore, they went away,” said Earnest.

“Where did they go?” Pickles asked.

“They went to Lumpaland, where lumps are sent to live happily ever after, without their sprinkles,”  said Earnest.

Ollie and the boy goats rolled their eyes.

“But let’s just say Ollie did have lumps, how does he give me the magic sprinkles?” Pickles asked.

One of the old goats jumped in, and said, “He slow dances with you.”

“Or sometimes they do a quick jitterbug!” said Henneth the blind chicken.

“And then where does the baby come out?” asked Pickles.

“Well, between your legs, of course,” said Earnest the pig.

Pickles went screaming out of the barn.

Earnest followed her and put his arm around her. He consoled her, “Don’t fret now, no lumps will sprinkle you,” he said.

Posted by Katherine Dunn/Apifera Farm at 8:08 AM

Email ThisBlogThis!Share to TwitterShare to FacebookShare to Pinterest
Labels: Pickles