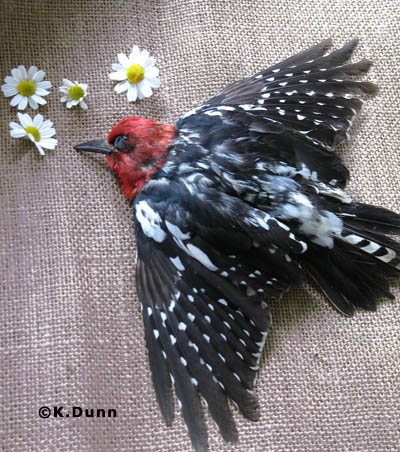 I went out to the front garden area this morning to check on a certain plant I am trying to identify, and as I stood examining it's leaves, found a wounded woodpecker right there at my feet. It's one eye was still blinking, and I had hopes it was simply stunned and would recover. After waiting a few moments, I picked it up to examine it, and found a contusion under one wing area,swollen, most likely the victim of a tooth wound of one of the cats. His right eye was shut, but he was still breathing.

I took him in my hands and went to sit with him in the shade, hoping perhaps in time he would recover. He still held his head erect, and was still blinking. His wings were fine, and there was no open wound. His little right foot was able to grab on to me. But after witnessing the slow 2 hour death of Tucker the chinchilla two years ago, I knew that certain body contortions meant death was progressing. I just told him to fly, go on now, just go, it's OK. Soon after he opened his beak and took a 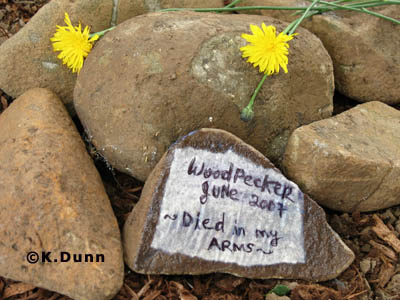 final little gasp. I hope if any of my animals are ever wounded I can be there to help them on. It makes a difference in one's day, life, to witness a death of any kind, even the death of a small bird. Any death, even of a bird only held for 30 minutes, can be symbolic of many deaths past and future - and one should stop, pay homage, and then rejoice at all the life still surrounding. But always, stop, shed a tear, treat it as a gift, pay homage.

I created a little death portrait of him, and buried him in a muslin bag with daisies. When I sat the little headstone down on his fresh grave, I heard coyotes in the upper hills. An unusual time of day to hear them, but a greeting, I'm sure.
Posted by Katherine Dunn/Apifera Farm at 1:05 PM

Only a Paper Moon said...

This is a heart touching post, I can relate since I myself have found wounded wildlife time and again and have stayed with them until they breathed their last breath here on Earth. It brought tears to my eyes, and you are absolutely true, always pay homage to life no matter how big or small, they are all gifts to us.

This is a touching post. I like your view on death and that last sentence of the 2nd paragraph. I feel bad when I see insects struggling to fly. I tried to help a cicada flip itself over today, but it was just about dead. It tugged at my heart to walk away and leave it, but being late for work is no fun either.

Lovely. Your writing and thoughts are always so wonderful. Just an hour or two ago a giant red-headed woodpecker swooped in front of me and flew off across the farm. I'm always amazed by their beauty. xx

I am studying energetic healing..
The other night in class we were talking about death and dying..
A student said, that she enjoyed, and felt privilliged, being present during death..
And the class all hummed in response- yes we understand.
Our teacher said it is important to help the dying 'cross that bridge'.. help them know, that they have our blessing to do so..to know that they will be safe..

With your beautiful little farm cemetary, and the rituals around it.. I think you have helped so many creatures cross that bridge..
A beautiful gift no doubt :)

That is s osweet... Alas , in the animal world every day is a matter of life and death..Humans too, but nature is so much more! I have missed a few days of blogging here!

Katherine, you are truely the Mother Theresa of the animals! How sweet you are and so kind to share such gentleness with this little bird, who, I can imagine, felt so saddened by the loss of it's beautiful life. Hoping that it's look into the future was filled with the candle of the love of heaven, I pray that he flew to the most beautiful garden there, protected forever. You helped him in his last breaths on this lovely Earth. I am sure he will treasure your caring spirit forever. Thank you for sharing this touching moment in your life and in the life of this beautiful bird!!

Oh this just makes me cry. What a wonderful thing you did for this beautiful bird, Katherine. So touching and sweet and kind.

That's all we can ask ... to get the chance to ease one life, to make a difference in one life. You made a difference to that poor bird.

that is hard to witness, but witnessing that bird's death gives some meaning ... doesn't it? Thank you for giving the poor thing a little place to rest