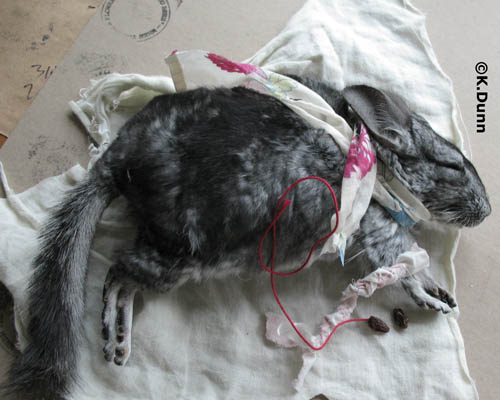 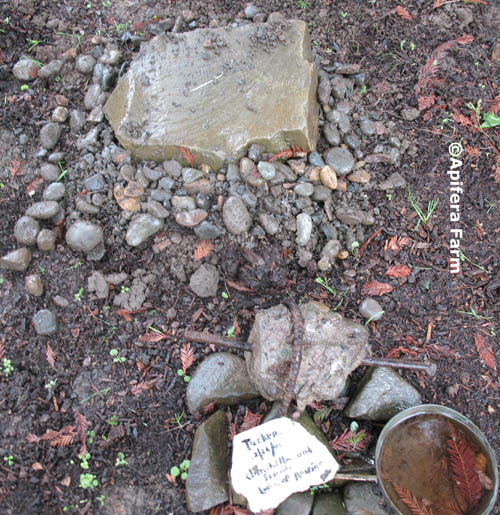 Birtie the chinchilla, was the smallest member of Apifera Farm, and we said goodbye to her today. She died as unexpectedly as she had arrived last winter. A neighbor had rescued her from a household of neglectful college students, and she figured I would take her in. Actually, she drove up the drive and put the cage at the doorstep - by the time I got the door open she was in her car, telling me I had to help this poor animal. I had recently buried Tucker, the other chinchilla I took in back in Minneapolis, and I was not looking to take on any more rodents.

The little creature came with no name, so I called her Filbert, or Birtie. She was very timid, and it took time to tender her up. I am not really an advocate of having pet rodents, especially a lone one, but they are sweet little creatures. I decided she had been through enough, so I kept her. Rodent or not, she needed a stable home.

Not long ago, Birtie developed a condition that I knew was not good, and it was obvious she was ill. It appeared to be related to kidneys, and there wasn't anything I could do medically. I knew she would die from it , but she was still eating, sporadically, and drinking. I kept her three decker condo near one of my drawing tables, so she had companionship while I worked. Last night when I returned from barn chores, I saw her body in an odd pose. She was dead but her body was still warm. She must have died when I was in the barn. I felt badly I wasn't there to hold her while she died, but she was not one that really liked being held, and perhaps having the normal sights and sounds of the studio was comfort enough.

I wrapped her in french linen, and made a little scarf of vintage cotton. The little red string was a toy she liked, and I placed 2 raisins at her feet, and a sprig of fresh lavender to sooth her soul. In dry weather, I'll paint her headstone properly. She rests next to Tucker.

Death is not bad. It's not morbid. It's just part of the project of being alive. The actual act of caring for the body is very important, I've learned.
Digging the little hole for her body, tending the grave, it's very important for me. It's not really about honoring the dead, for the fact they lived and meant something to someone is honorable enough. By carrying the body and burying it, it shows me what death is. It's OK. Death is safer than life, really.
Posted by Katherine Dunn/Apifera Farm at 10:50 AM

Beautifully said. I would add that in the act of honoring other creatures we show that we too are worthy of being cherished for our lives. All creatures are precious beings.

Death is safer than life, really.

So true, and so poignant. You have such a huge heart, Katherine.

Birtie was fortunate to have had such a kind caregiver in her last days.

A friend of mine had taken in Vietnamese pot-bellied pig as a rescue four years ago. She had the room on her farm and the heart and so Gypsy spent the last years of her life in a place of love. She was laid to rest last week. I told my friend that Gypsy was fortunate to have slipped away amongst chicken friends. (I'm very partial to the poultry!) She told me that her last meal included peaches and vegetables. I appreciate your view of death. We seem to be of like mind.

I have been thinking so much about this and thank you for these lovely words. So true. Birtie seemed such a sweet soul. Lucky to have found you.

i am a new reader of your beautiful blog. this post is so touching. it is easy for us to get disconnected in this hurried, hectic world, and forget these small, slow realities. life is so precious.
thank you for your caring approach, for the living and the dead.

Your rituals for those who've passed are a tender and caring farewell. About three years ago, a dog we used to have had nine puppies, but three died. I was so saddened by these little warm, lifeless bodies - but also rejuvenated by the vivacious six who lived. I wrapped each one in a different fabric that my mom had given me, put them all together in a shoe box, and then laid some dried mini roses on top of them. It was so cold that night and I wanted to keep them warm. I don't know that I can see death the way you so eloquently put it - but I hope in some way that the fabric and roses meant something...silly as it might seem. Thank you for your insight and for thoughts to think upon.

Oh, Katherine, that brought tears to my eyes. What a sweet way to honor Birtie.