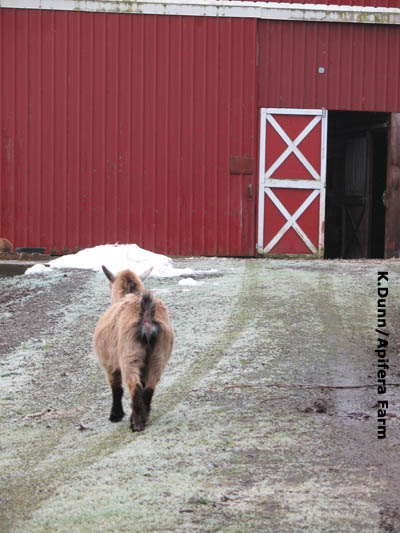 There have been some firsts for the old goat this weekend. After 7 days, Guinnias spent time out in the front barnyard eating grass. I was so happy to come upon him when I was in the field doing some cleanup. He waddled right over to me, and in all honesty, the expression on his face looked so...bright. Brighter than the last few transition days. It's as if he said, "I think it's going to be ok here..." 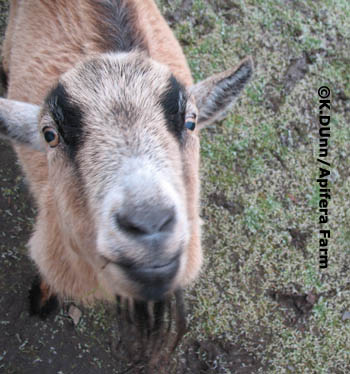 Other firsts...I hadn't heard a peep or ginny or bleat out of him. Unlike Frankie who speaks constantly, usually saying, "Excuse me, I'm down here..." or, "Ah, you with the red bucket, why are you walking in the opposite direction from me?". But this weekend, I was in the barn, and saw that Guinnias was napping, as usual, in the Ward Room. But a few minutes later, he was near by, trying to speak. He has more of a grunt-squeak than a bleet. Each animal has a distinctive bleat. I know all my older ewes voices, and Stella and Iris, the rams, they are all very distinctive.

Guin also will let me hold him around the neck, while I kneel near him, and he rests his head on my shoulder, his eyes half open. Now that's darn nice, for both woman and beast. And if you want to send Guinnias a note, he gladly accepts those little honey graham bears by Nabisco [non cinnamon].

Gift Update: Thanks to all who donated to get me up to Washington and back to pick up Guinnias. His thank you gift is in the mail...
Posted by Katherine Dunn/Apifera Farm at 8:56 AM

Oh he is simply lovely. I adore his black socks. What a handsome goat. I love it that he rests his head on your shoulder. He knows he has come home.

That looks like a happy boy! How wonderful that he's settling in so well and feels comfortable enough to talk to you.

How adorable that you have a hugging goat. He's a sweetie. Lucky boy.

Hi there- what I like is he really looks old. He is the character in one of my children's books, he's come to life. And he actually isn't a hugging goat, he is a "OK, you're hugging me now and it does feel sort of nice so I'll lean on you some more" goat.

Happy New Year, Katherine, Martin, and Pino! And, of course, everyone else there on the farm. Wishing you love, laughter and pie. XO from Mississippi, Amy

He has the cutest face on planet earth!!

Awww! What a sweet old guy!

Now, now, Katherine, are you sure he really isn't a "I don't WANT her to think I'm a hugging goat, so I'll just wait until she initiates and then just act like a Lean In Goat?"

Hi Carla and Mare- yea, his beard is very long too...he kind of will open his lips and show his teeth when he smells stuff. Zan, funny! Yea, maybe you're right. Today I went to walk too get the mail, and he followed me to the barnyard gate, so he came and walked half way with me. I think I might have to put him in the back yard with the dogs when it's warm and he can sun, and hang by the studio. He and Frankie are very independant creatures.

oh man, he is the cutest. i love that photo. i'm so happy you had a good journey and he is feeling more at home now! yay. and the way you described him resting his head and snuggling--Oso does that every day when he wants a hug. he'll stay like that for 10 minutes or more somedays, specially be the wood stove. so i know how precious those moments are, and i can only image with a goat! yer such a good mama.

He is fantastic! Congrats on the newest addition to your lovely farm....

Katherine, good job. glad your new old friend has a home where he can relax. thank you very much for the luxurious lavender bundle. my cats couldn't get enough of it. they sniffed and laid beside the box with eyes closed as if it were full of catnip. big hug to you and the old goat! smile. deborah