When you name a duck 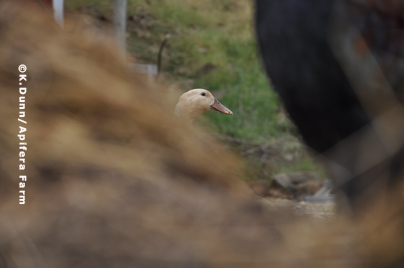 Naming the ducks has been a challenge. For starters, I've never named a duck and they are very shy around me even after a few weeks. This has allowed for only short, cocktail chatter rather than longer intimate conversation one really needs to name an animal.

"You could stop and talk to me," I said one day. While their hesitance to stop and chat is a bother for my duck shepherd ego, it does allow me to watch them waddle off which is very amusing. I thought chickens were entertaining but duck ladies really swing those bottoms!

So after a few weeks of quacks turning slowly into longer sentences, I have finally named the ducks. Harold has the most beautiful, brown neck which doesn't show in this photo and Ray Duck has the white neck ring.

Doris is mother to the other three ladies. She is in the front of the waddlers - apologies to Doris for cropping her beak. Taking up the rear is June with the white eye stripe and in front of her are Harriet and Madge. To be honest, Harriet and Madge look very alike and I have to look at my notes to tell them apart. That will come with time and duck study play dates.

Taking pictures of ducks is an art in and of itself. Stay tuned. 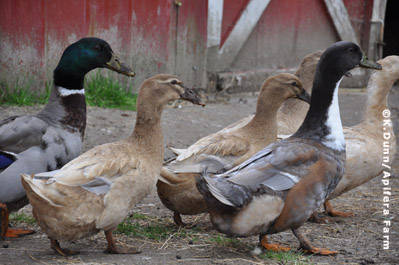 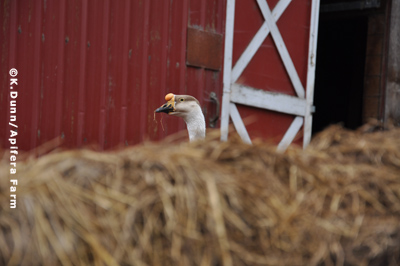 Email ThisBlogThis!Share to TwitterShare to FacebookShare to Pinterest
Labels: Priscilla the old goose, The Bottomtums

What beauties! I've been encountering quail scurrying across the road the last few days. They and the jackrabbits and ground squirrels make me wish I had a bumper sticker on my car that reads, "I Stop for Desert Fauna"
Marissa

love the look of the barn - the last picture is ace!

PS:
I have a giveaway on my blog:
http://christianeengel.blogspot.com/2011/06/4th-of-july-giveaway.html

funny how when i started to comment my first thought was exactly the same as your first comment.."what beauties!" it just popped into my mind so they really must be fine duck specimans....and their names are perfect...harriet is my favorite...excellent choices and what interesting gems to watch.

Duck bottoms -- ok, is there anything cuter?

M- quil are magnificant, always wearing their dress hats out like 1940's ladies and gents. The ducks are wonderful. Still rather flighty, but they not as bad and we can't wait to make them their own pool. Their bottoms are so charming and they really seem like they could have walked out of an animation. They make this real flap flap sound when they walk.