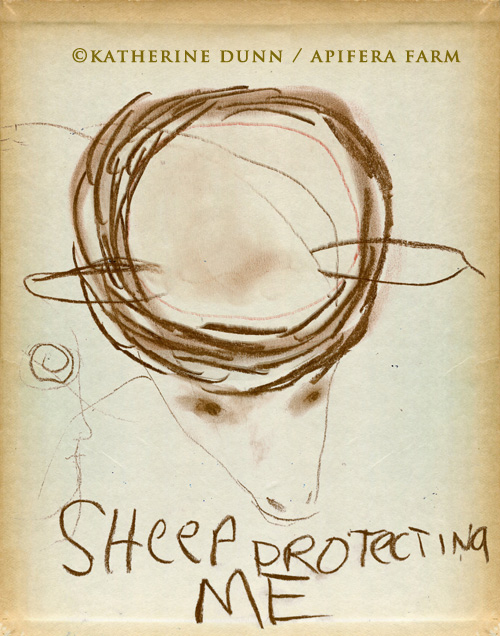 I'd like to thank Jason Mihalko for writing this post today on his blog. It is in response to what some call an attack on me and Apifera with the original title of ""Animal Lover, Animal Killer: Katherine Dunn's Sanctuary/Slaughterhouse."

Jason is a licensed psychologist in private practice in Cambridge, MA. He works with adolescents and adults both individually and in groups. We met virtually over the past years because he has a wonderful, hard working therapy dog at his side, and he had discovered the healing heart of our donkey Pino.

Jason's post came in response to my posting about a vegan attacking me and my farm [she appears to not be letting people post comments, but there are many being written on Facebook]. I have questioned how to respond to this, as this person has obviously been trying to get comments through on this blog letting me know how inappropriate my eating meat is in her mind. She feels I'm a hypocrite for helping animals, and eating some of our sheep. For the record, Martyn was a vegan for years, I was a vegetarian. We both chose to eat meat for our own reasons later in life, but when I did, we were moving to the farm and I decided to only eat meat I raised, help live at birth and helped die quickly in the sun with me at their side. We also eat some meat from local farmers who are raised and slaughtered on their farms.

I think Jason's article today says it very elegantly, without any hate. Jason also happens to be a vegetarian.

That's all I will say about this. I don't need to expend energy for someone who is not willing to come to me in peace, advocating peace amongst all creatures, but she is not walking the walk. I am.

Postscript. Ms. Tyler has been politely informed that her post, and all her comments, screen shots of the various edits she makes, have all been sent to an attorney. It is good to have his expertise to deal with this.

A week later: And to the threatening email senders even a week after this post - the attorney has those too and two were traced to be from commentors of the original post that started all this. It should be noted that putting defaming words about my farm out there - and then editing the title does little to take away the original defamation, that is the internet. The original tweets and FB links that were sent by this person, with the original title calling us a 'slaughterhouse" are all out there, and consul has been working on that behind the scenes with those service providers and online platforms. What's so sad is this person could make her point by rewriting this post link to take my name and farm out, but she has to be right. The edits she has made do not take away the original defamation, especially in her original title.

Right on! You walk the walk... I have seen your love in action!

I have had many people writing me and sharing the comments they have left on this person's blog- but she's deleting them- so I will repost them here tomorrow.

I also hope that she looks up the word "slander".

This is her main web site http://www.jotyler.com/contact/

Anyone who has read your blog should be able to see how committed you are. She must be very unhappy with her own choices to be so attacking of yours. Whereas you by walking your talk, encourage people to care for animals and other people, she, by attacking you, shows how spiteful she can be and alienates others from her cause.

There are always going to be people who disagree with others, particularly when it comes to emotionally charged subjects such as the care and welfare of animals.

So many people love what you are doing at Apifera and the genuine love and compassion you have for your animals. If only all farms were run with so much care.

It isn't about weather or not you choose to eat meat, the fact is that your animals are well looked after and cared for and have the best lives possible on your farm.

Keep up the great work and ignore the haters.

I love your paintings, by the way!

Dear Katherine-
I've read both Jason's and the attack blog. I'm not able to write beautifully about this-I just want to say that it is so evident that your heart is right. Please don't publish this comment-I don't comment to get people to visit my blog-honest I don't! Back to the point-ANY one with half a brain can just look at your art, your photos, your words-and see and feel the love you have for your farm and animals. You really believe in what you are doing. I can't see that in the attack blog-to me that stuff is just fluff...You work hard, you love hard. Don't let someone who just doesn't GET IT hurt you-maybe easier said than done, for a sensitive soul...
Sorry-didn't mean to be so long.
Love, Debra

I was so sad to read your post about these attacks and I wanted express my complete support for you and the beautiful, heart-filled work you do. As hard as it is, I have to think how painful it must be for someone to go through life being that intolerant and misguided in the true meaning of ahimsa or non-harming. Meanwhile, you continue to shine and inspire and augment love through your art, your words and your relationships with the many residents of Apifera. That is the truth and that is what will remain long after the words of that blogger fade into cyberspace.
xo

I can never understand some peoples need to bash the choices that others make.

I'm too focused on making art to heal the heart right now to transcribe comments from people like I said I would. It's been lively. Let's remember the word of the day "tolerance". You can read more comments on FB pages

It appears that Ms. Tyler has added this attempt: "Author’s Note: I’d like to clarify that the following post is not meant as a personal attack against any individual. In hindsight, I would have written this post without naming specific names since it seems to have distracted some people and prevented them from considering my message. I chose to quote from the public marketing materials of one farmer as a means of illustrating the broader issues of “humane meat,” the ideology of Carnism, and our conflicted relationship with animals. My intent was not to demonize any single person, but rather, provoke thought about what it means to love animals and how we might better align our behaviors with our values. As I have written in the post, I do not question Ms. Dunn’s sincere affection and concern for animals-in-need."

I need to back away now. An attorney was contacted and she has been told this. AND THANK YOU TO THE ABUNDANCE OF LOVE AND ENCOURAGEMENT - OVER 100 VIA EMAIL AND FB TODAY ALONE!

People who don't farm, have never farmed, or spent more than a couple of hours on a farm have absolutely NO clue. NONE. They have distant philosophies and coffee table book views on farming and animals in general. I know, I was one before getting my hands dirty. Furthermore; if Vegans had ANY idea the pollution their lifestyle is causing to till the soil, and the chemicals applied to grow soy, corn, grain, (organic doesn't get you out of that one...) and all those other ingredients that then have to be "processed" into pseudo food substitutes (fake cheese, meat, and milk) preserved and packaged; (chemical free plastic? Not invented yet to my knowledge? What will you wrap your tofu in?) and understood the environmental impact the manufacturing of these artificial products was having on ALL living creatures (ourselves included) they might take pause before throwing stones at people choosing to eat meat with awareness and respect for the animals in question. Extremists (vegan, animal rights, even human rights) who go around threating and belittling others (often with threats of physical violence) really need to step back and meditate on their "I respect the rights and lives of every living creature" stance... Katherine you are doing good work and don't forget that!

A week later: And to the threatening email senders even a week after this post - the attorney has those too and two were traced to be from commentors of the original post that started all this. It should be noted that putting defaming words about my farm out there - and then editing the title does little to take away the original defamation, that is the internet. The original tweets and FB links that were sent by this person, with the original title calling us a 'slaughterhouse" are all out there, and consul has been working on that behind the scenes with those service providers and online platforms. What's so sad is this person could make her point by rewriting this post link to take my name and farm out, but she has to be right. The edits she has made do not take away the original defamation.