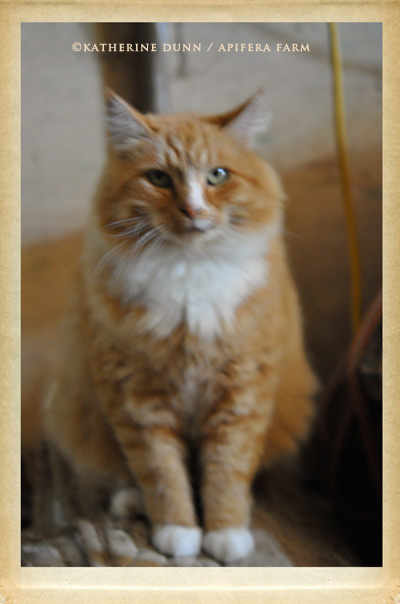 We used to joke that some visitors might have wondered if we really did have twenty-five cats, since they were semi ferals and back in the early years only came out for me. Most would not even show their faces to Martyn, so strong was their innate desire to remain safe. And since I was the hand that fed them, consistently, they formed a secret covenant with me.

It was ten years ago that we moved here and before the goats, horses, pigs or donkeys arrived, even before The Head Troll got her notary license, there were cats. Lots of them.

In one of our first days here, I was in the new barn when out of a hay bale crevice stepped a one pounder - a red tabby kitten. He looked at me earnestly, I touched him, and then he slipped back into his hay empire, safe from large upright dwellers like me. So it began, the first litter was born into the already burgeoning adult cat colony. Mama Kitty went on to have three more litters that year, the last of which she moved to another nearby farm. I was able to trap and fix all the kittens, but it took two years to catch Mama. She still lives here, with two of the original litter sons on our front deck. To this day, no one can touch her.

It sometimes amazes me the original litter ended up being her healthiest. Gus, the red tabby and first cat to introduce himself to me at Apifera, is still with us. Gus lives in the hay barn, along with his litter mate, Hazel. Another litter mate, Mr. Plum lives on the front deck with Mama and his half brother, Little Orange.

I was out in the barn yesterday with my camera, to grab some hay, and there were Hazel and Gus, sitting in the afternoon barn light. Hazel was atop some old rope and it was like a stylist came in and propped the setting for beautiful abstract lines and color. I had the wrong lens, but love these photos. Perhaps Gus and Hazel allowed such intimate portraits knowing they are going on ten years old - quite elderly for semi ferals. Then again, I don't think animals think like that. But perhaps it was the universe that granted me this opportunity to capture them in intimate portraits, so I can look at them years from now - and remember the first cats of Apifera. 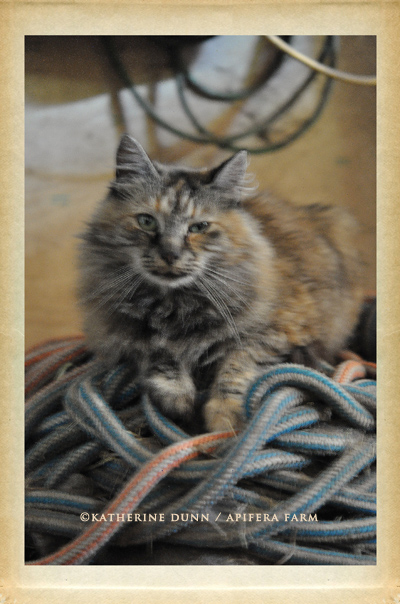 Oh, how I love these little souls. Wonderful photos!

Of course, they come out for you now....

I love the pictures of your farm. I am your latest follower. We are just getting ready to get 3 ewe Southdown lambs. I am really excited about getting them.Thank you for sharing your news. Please feel free to visit me in the orchard.

They're beautiful. I hope they have many more happy years at Apifera.