And my horse does it again 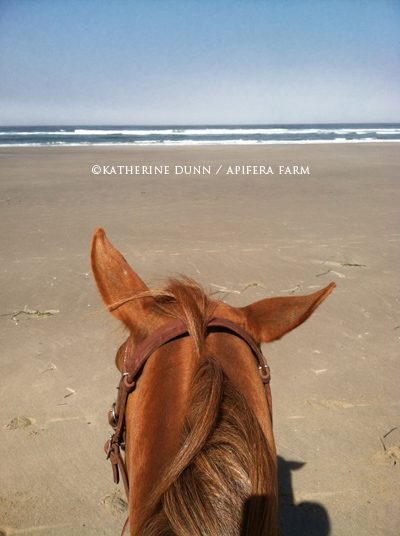 I had another verklempt experience in tandem with my noble steed, the always steady and stoic, Boone.

One of the many things I've wanted to do with Boone is take him to the beach. For awhile it wasn't possible-my car at the time wasn't worthy of the 1.5+ hour drive, and I wasn't confidant enough to do it on my own. But after working with Boone for more than three years in lessons and lots of road riding, my confidence took huge leaps starting last year. We started check marking things off The Boone Bucket List last summer-horse shows, learning dressage, long rides alone, a parade...and now, a beach day.

It was everything I had imagined it might be. But mostly, it was just a string of moments where I was so darn happy, and proud, of my horse and our partnership. I knew Boone would be fine at the beach but I had arranged to bring a friend with me-along with her filly and her Arab- because I just felt it was a good idea. The sound of the ocean can freak some animals out, and there are many new sights-hang gliders, waves, runners, etc [although we picked a more remote beach that tends to stay clear of people and we had the place almost to ourselves-only in Oregon!]. It just felt wise to have a riding buddy. I'm so glad for that too, because there were a few things I might not have tried on my first beach ride without company-like testing the incoming waves, or going into some deeper tide pools.

I had this overwhelming feeling of pride and accomplishment, sometimes emotional, through out the day. Even the drive down there, looking in the rear view mirror to see Boone in our little trailer, knowing he too was looking out the window experiencing this all with me for the first time. How many times had I been to the beach and saw people riding, and I thought,

Maybe some day I can do that with Boone...

and here I was doing it, finally.

At one point on a trail head, we came upon a young mother and four little children, all barefoot, making their way down to the beach [slowly, I might add, she had a lot of patience]. The trails are single file, so the people move out of the way if a horse comes. I saw the eyes of those little girls light up as they saw Boone, and I stopped to see if they wanted to pet him, and they did. Long ago, I had the same lit up eyes anytime I saw a horse. Perhaps when that little girl grows up, she too will be inspired to get her own Boone.

I hadn't been to the ocean for some time. I needed to see her. For me, the ocean isn't exactly 'relaxing', in fact, the non relentless sound of the waves, the wind, the salt air– it is overwhelming, almost surreal, for me. But not in a bad way. While I am there, I can only describe it like this–I become the ocean, I enter it. The ocean is like a womb, and after a day of being there, it is like that earth mother pushes me out, nourished, ready to be myself again, on land. That is the only way I can describe it.

Looking down at Boone's mane, watching him see everything with fresh eyes, was wonderful. He did everything I asked of him-including walking in deeper water and squishy wet sand. Long before he came to me, Boone had a bad experience in quicksand like mud, and for the first couple years, he would squeal in squishy mud, once even rearing on me. If he heard a 'squish' he went right back to that scary moment where he went up to his saddle bags in mud. We worked through that over the last couple years, and I haven't heard him squeal about anything for a long time. So when we went through that tide pool, I was beyond proud-I knew he trusted me enough to go in that pool, he knew I wouldn't lead him into danger. It took some time, but we have reached a great place together.

And last night, I had an epiphany about the whole day. I had been thinking, glowing really, about how well Boone had done, how proud I was. But then I realized, none of us ever doubted Boone would do well. Boone did well because he's Boone, but also because he knew I was going to do well with him. We are 'Boone and Me' now when we ride, a pair.

We cantered on the beach–I can't think of a more freeing feeling from the pressure's of daily life. I had many moments where I talked to the sky as if my parents were watching me, smiling,

I also had moments of thinking how humans had done a lot of destruction to Earth, but at that moment, as we rode along the shore I thought,

But we haven't messed this up yet.

Martyn came along and we parked the trailer and then he went off and fished nearby. I was so happy for him. We deserved this little get away so much. You have no idea the details of just getting away form this place for one full day! And with the new piglets, and another 99 degree day, I had to worry about water and all that to keep everyone safe. Martyn was excited about going fishing as I was about riding. And we hope to do it more often–we have to. I told Martyn last night that is my new goal-that he and I and Boone start adventuring out every month. He can fish and I can ride. For Martyn, his fly fishing pole is his horse. If you ever saw this man fish, it would bring a tear to your eye, and a smile. He is 'in his ocean' when he is casting, and its a beautiful thing to get to experience your mate so content, free and in his zone. I told him I get to ride a lot, he needs to be able to fish more and I have to help that happen. We are such worker bees and we love it, but I have to make more get aways for the three of us. We will all win.

So, the days of summer are waning. And next week, I will be back in the studio percolating, creating and dreaming. I love the first weeks of September for so many reasons. It is a deeply charged time for me, it always has been. It can bring melancholia together with creativity which can bring about very emotive work and thoughts.

How fun to do that and get that feeling that only seeing the ocean can bring.

How exciting and wonderful, all the steps you have climbed to get to this fulfilling life you have, and pride and joy you must feel. I wish you so much more, so that may continue to share and inspire all of us. (And how apropos this post, as I am leaving the midwest and heading to Oregon and the coast this weekend for an adventure of my own.)

Sounds like an absolutely magical day. I can only imagine how much help it must be to recharge and how much fret to arrange for it to happen and for someone(s) to look after all the misfits. xox

I love this story! I imagine it will percolate into your art. So wonderful that you and Boone and Martyn were able to get out and do this. Happy for you.

Thanks all for stopping by! It was wonderful-Cheryl, hope you have fun! Jan, looks like your summer is going well too. Thanks, Corrine, we need more recharge days. Candace- the ocean just pulls you back, I'm blessed to be an hour away.

What a wonderful, meaningful excursion for you, Boone, and Martyn. I hope you will have more regular outings like this. My mother took up fly fishing in her later years, and nothing freed her so much as to make the trip up the Parker River to the Plum Island sound, where she would fish for sea bass until the waning light or receding tide called her back to land.

Susan, how wonderful for you mother! Martyn is so passionate about fly fishing. When we met back in pre-farm days, we'd fish a lot, and go on outings. I got to see how happy he was, in his zone. Witht he farm, out weekends are so full. We have a river to fly fish in but it is limited. And I need time with my horse to-so we are thrilled to join the two passions. Although I'd like to do some more fish days. Fly fishing is rythmic and so calming.