I thought she'd be here forever 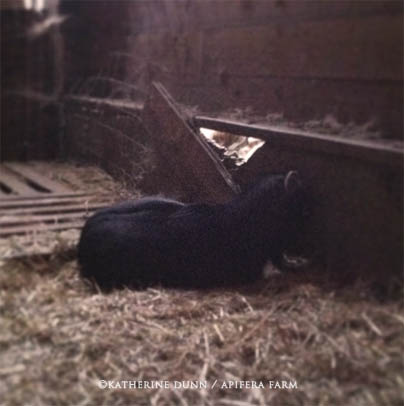 {For the faint hearted, I assure you nobody has died.}

The Head Troll is one of those creatures that come along in life and you just don't ever think of a life without them. The life you had before you meant them seems to not have existed, and a future without them in it seems unreal and laughable.

But in the past couple of months I've noticed some behaviors in our fearless leader that remind me she is in fact...mortal, er, gortal. She too is aging. I gave her the name Franklinia on her arrival because I knew I had to call her Frankie. She was a girl with a tomboy heart. Perhaps that is why I overlooked her mischievous ways and rather non cuddly attitude towards anyone. It all makes sense now, she knew back then that being sweet was not going to get her job done. She was to be a leader, a planner of major barnyard events, a notary, a list maker and a task keeper. She was to be one of my greatest muses. In a very short amount of time she was casually christened The Head Troll because before there was Marcella or a grumpy pig or crippled goats, you had to get by Frankie at the gate, and it wasn't easy. I've never know a swifter vessel-capable of squirting her troll body through a man's legs like a speeding bullet. This goat could get anywhere, anyhow, anyway.

Frankie has always come into the hay barn with me where the feed is kept. It boggles my mind that of all the goats, she is the one that does not tip bins over. She is the only animal besides Marcella who is allowed in the hay/feed room. Cats of course reside there, but Frankie is allowed there anytime. It is where she keeps her lists and special buckets to pick names out of. But in the last couple of months she has taken to staying there, carving out a simple bed in the hay area, a spot where she can look out a small hole at the light where the rams eat breakfast, and cats come and go. She is always facing away from me or the gate.

She is not sick, she is simply slowing down. Perhaps the chaos of running the barnyard all these eleven years has begun to take its toll on our Troll.

If you follow along here, you know I have a ritual when an old Misfit is clearly beginning to check out. I let them know it's okay to leave. But with Frankie, it is not okay to leave. I've told her this, a huge burden, I know. But such is our relationship, we don't hold back with one another. She's my rock, my empress, my go to in a pickle gal.

I had a similar feeling when my mother was getting up into her late eighties and things were beginning to unwind. I knew her time was coming–some day– but life without her seemed impossible and if she no longer existed neither might I. I mean, who knew? It was an unsettling feeling, and then I'd move on to other tasks.

And so that is how it feels to see my muse resting in her private little spot of light. Unsettling. And somewhere I can see my mother, rolling her eyes for having just been compared to a goat in some way. It all comes back to my mother.

{Do you like all the stories shared here? This shepherdess is going on the 10th year of blogging you art and story from Apifera. Consider buying books this year for gifts, or supporting a Misfit in other ways. Hoof stomps!}
Posted by Katherine Dunn/Apifera Farm at 11:33 AM

Thank you for the disclaimer up front as my heart could not take more just yet! Oh, Head Troll ... she probably rolled her eyes to be compared to a mere mortal. I laugh to think my mother's kidney doctor - a lovely young woman from India - was always scandalized whenever my mother & I would compare her situation to my departed cat's. "Promise you won't put me down like you did Frida," my mom would laughingly say. And I would remind her that it wasn't kidney failure that prompted that decision, but when the cat went out of her mind crazy. And how I would do the same if my mom turned in that direction. Sigh. May sunshine and comfort be the order of the day for all for many, many days.

I love that your go-to-in-a-pickle gal is a goat. That seems like something we all should aspire to have/know. My mother, she loved pigs. She would have loved Pie Day.

What a fun memory you shared- these will give you smiles amidst tears for sure. I often wonder how my mother would feel as her ashes are scattered in the roses [she loved roses[ but then I put some in with my pug, and my old terrier who came with me to Oregon but I held onto his ashes for 10 years!] It just felt good knowing her shes were in their with them. Funny what we do to cope or move on.

I can relate to the ageing of a tough one. Our big lab is 14 and showing signs of dementia which is so hard. Each day is a gift. Maybe she has lots of lists to make now so she is close to where she needs to be. xox

I appreciate the warning...my heart is most definitely faint. And your words go straight to the heart - or, at least, mine anyways. I hope you have many years left with Head Troll. We felt this way about our corgi, Ruby, who's been gone now for 16 months. We still talk about her daily - her light filled our lives with joy. <3