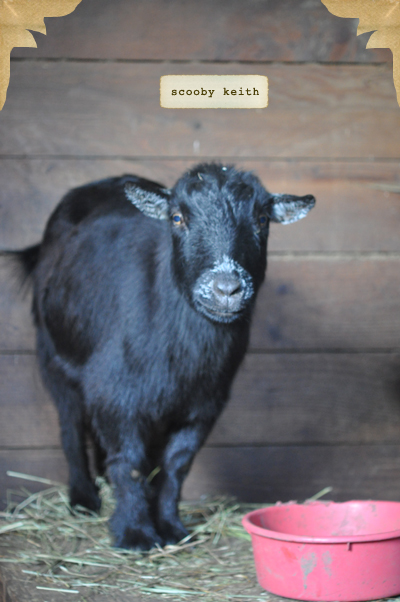 Scooby Keith has made love to The Head Troll. I know, because I witnessed it, twice. I say "make love" because of any copulation I've witnessed here, which have been plenty, I must say it was a very gentlemanly encounter.

Scooby Keith is elderly, adopted from Sanctuary One with Aldo the Elder. Scooby had been neglected badly prior to joining Sanctuary One, and when he arrived here he was thin and not the healthiest chap due to that past neglect. He has always been a loner. I kept him down in the lower Misfit village, along with Aldo the llama for his first months here with us. But he was prone to go lie in the cold rain, away from the pack, even though he had ample room in shelter. He just seemed to prefer being alone. But at one point last winter, I knew he didn't feel well, and I started giving him a regime of vitamin shots and such, but he wasn't eating well at all. I talked to the vet and she said I was doing the best for him, but we opted to dose some penicillin too in case it was lung related. It took a few weeks before I took a breath.

He pulled out of it, but never has been a fast or strong eater.

So this winter, I decided to bring him up to the goat barn. I let him stay in the hay barn one night and he liked it. He hasn't left, except for sunny days, which are few and far between here in winter. In the last couple months he has put on a bit of weight, and is eating better. He also seems very content in his hay barn. The only other Misfit allowed in there is The Head Troll, as well as Marcella. Old Man Guinnias used to come in with me every morning. And once and awhile Goose gets in behind me, bringing Moose, then Earnest, and Wilbur and Eleanor and who knows what else and its pure chaos-shepherdess yelling commands and goats leaping here and there hoping Earnest will knock over a feed bin-which he would if allowed even 30 seconds on his own.

I thought I'd leave him in a week or so, but he really likes it. His personality has blossomed a bit. He's always been friendly, but with me over the animals. Maybe he was someones main goat. I think he likes the one-on-one he can have with me, and the Head Troll. They even eat side by side. Unheard of!!

So, Scooby had sex and I'm glad. An old guy needs love in any way it comes. Touch is important to healing.

And this is yet another example how care taking these creatures often means watching for small signs of happiness from them-or contentment. Just the small change of moving into another area seemed to make him very comfortable. I'm sure he'll be back in the lower Village come late spring, but for now, i am thoroughly enjoying our one-on-one daily encounters.

Say it with me now- "W love us some Scooby Keith!"

{If you want to help sponsor Scooby and other Misfits, you can do so at reward levels here.}

Go Scooby. So glad he got some lovin. He has a sweet as ever face. Kisses for that guy. xox