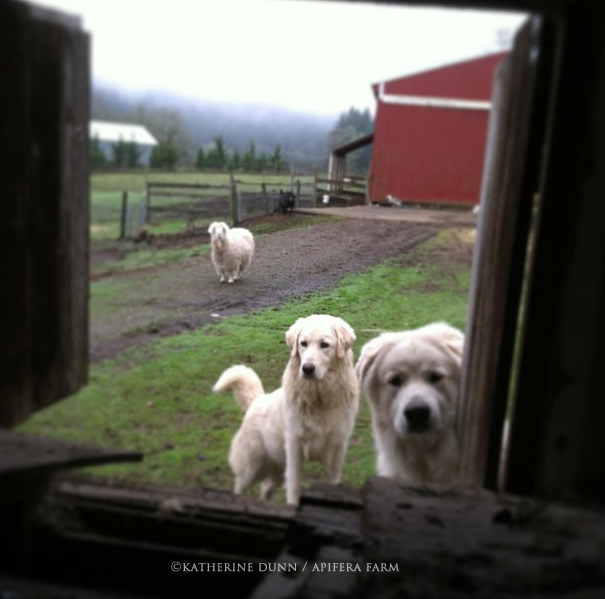 I have such strong feelings for these White Dogs. In some ways, maybe too much. I grew up with house dogs as pets, they had every comfort they needed. I never had dogs that lived outside and had day and night jobs. It is an incredibly rewarding relationship, although it challenges some of my comfort zones.

One comfort zone is the fear that Benedetto will flea. It has been almost 2 months since he magically appeared out of nowhere on our farm, and it has been one month since he was neutered and chipped. He is definitely happy here, and every day I notice behaviors that show he has established a real comfort for his new role.In fact, it's like he just knew it all along, there seemed to be no transition period amongst the animals. He was meant to be here for some reason.

He is so eager to work, but I want to wait one more month before he can really be out in the sheep fields-only because there are some areas where he could go under fences. I fear more he will get shot in the upper hills-if he went after a cat, or just showed up-there are people like that around here. My vet told me an adult dog when neutered can still produce pups for a couple months, so I figure his wandering eye and nose might be safer to wait another month.

But I have to learn to trust him, and let go a bit. These dogs, as I was told from the start, can find a way to get to where they want or need to be. That's kind of the point. Benedetto and Marcella are not jumpers, but they can contort themselves in ways to allow them to get under the smallest fence openings, I've witnessed it. Benedetto and Marcella get roaming time every day in an upper sheep field, right now where the piglets are grazing, and they can see the flock in the next pasture. Soon I will be putting them in with the sheep at night to bond, and in a month or so, days will be spent with the flock.

The other day I took them down into the lavender field to walk the fence again with them. Marcella found a hole under the fence-a cat and raccoon door for years-and she was under that thing in a heartbeat, and on the road. While we are a rural road, we have a lot of morons around here who drive like their pants are on fire, so I just did a heart flip flop. I scolded her, and she came back pretty quickly, and was praised. Benedetto did not follow her under and listened to me as I warned him not to go. I was pleased with that. Maremmas do not 'come' on command, it is a fact.

So, baby steps. What is wonderful is to watch these two together. I just can't imagine Marcella now without Benedetto. He is one of the sweetest dogs I've met, very agreeable. I like that they can be independent of one another too, and they do have areas that each one seems to clearly favor, as 'theirs'.

But Benedetto wants to work. He tells me every time I look at him by one of the paddock gates that lead to the sheep fields. Marcella is already working in her own way, in her barnyard, and learning from Benedetto who is older than her. She helps the Misfits eat their hay, keeps the pigs in line if they rush a goat, and sits amongst them, watching, listening. She has also alerted me to a couple of pig escapes.

In the huge wind storm we had last week, I looked out in the barnyard after the dusk, everyone was safe and snug in the barn, but there was White Dog. He was standing on the concrete wall by Old Barn, his hair blowing in the strong gusts of wind, head held tall, watching. It gave me goose bumps. 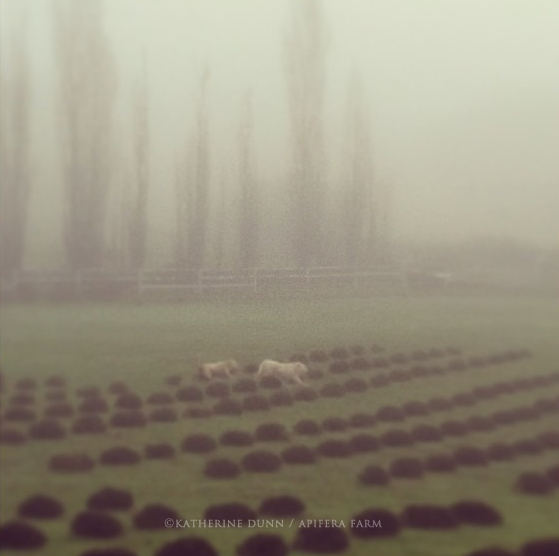 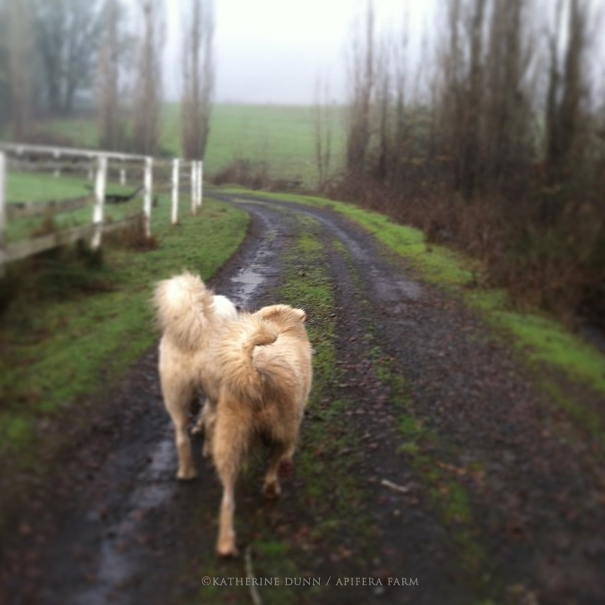 And you just gave me goosebumps, too! Love the continuing tale of the white dogs!

I just read a post by another friend and her birthday boy 20 year-old son…facing the trials and tribulations of 'letting go' and trusting that he will be ok. Your post here about your two white dogs is so much the same flavor! Life is full of lessons, isn't it? :-)

That last photo, tails flying high is a winner. These two could be quite formidable together no doubt. xox

This is such a magical, mystical unfolding of events. Thank you so much for sharing the story with us!

I just got back from Texas where I was thrilled to identify two Maremas (sp) working on a ranch there.