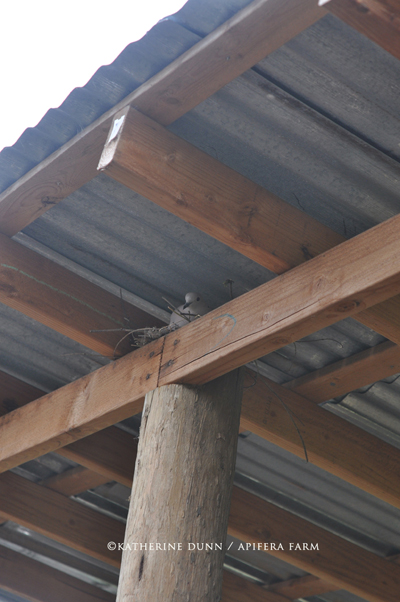 Two years ago when my mother suddenly died, a Mourning Dove appeared in the front garden, near where I sat crying. It sat so still, and for so long-some 20 minutes or more-that I felt it somehow was my mother. By the end of my setting there with her, I truly believed it was her. When I walked back in the house, I went out the garden window and she was still there in the same spot, and I turned to return to her outside, but she flew. She wanted me to get on the task at hand-my life.

I have found this to be true in my own life, I can't speak for others-but when someone I love dies, they are not lost, they are only evolving into a myriad of other forms. They take up residence in songs, stories, smells, familiar places, an article of clothing, or a family Christmas ornament. For me, my mother is not one dove any more, she is all the doves. When I see a dove, I greet her. I am especially happy when doves fly very close by, and land on a fence post if I happen to be walking by. This feels like a private meeting one-on-one with my mother.

She was warming the new life that was to be. She was expanding. Life was there, again, safe within a womb of shell.

I hoped I hadn't spooked her, the nest is only about 10 feet high up. The next day I made sure to have my cell phone so I could take a quick unobtrusive photo of her on her nest, and there she was. She obliged by sitting still.

That same afternoon-yesterday-I went to find that one of the new chicks was dying. I had brought home the second batch of chicks on Wednesday, Buff Orpingtons, including a little rooster as I've always admired them. No, I don't need another rooster, we have three and so far all is peaceful. But I could tell from the get go he seemed a bit off. By afternoon he was clearly dying. And he did. One of his mates also looked odd, and she died a bit later. Chick death happens and I'm not sure what it was but I replaced them with two more chicks today and hope for better health. The first four chicks I brought home a month ago are thriving and adding feathers day by day.

When I left the hen yard after burying the little chicks, I thought of Mother Dove. Outside the coop, life was evolving in some little eggs. Life and death, like mismatched socks are often worn together.
Posted by Katherine Dunn/Apifera Farm at 1:47 PM

Mourning doves are a special bird to me, I like their cooing and their pretty subtle colors. That is nice to think about your dove and your mama.

The song, the smell, the favorite flower, powder, and sticky itchy hair rollers. So many things evoke memories of those we've lost. So glad Mama dove has made her nest so near. Sorry about the chicks. xox

I love the soothing cooing too, Terra. ANd sticky hair rollers! Yes!

i so very much agree with what you've written here. i think that's how, for me anyway, grief transforms into remembrance and then, of course, the beloveds are never far away.

sorry to hear about the chicks. our poultry has so far come to us a bit older -- i find the idea of raising chicks to be very daunting!

'the beloveds are never far away'...I take comfort in that too. Sometimes, still a moment of intense missing them in body, or voice, but then, a message usually comes. Chicks are probably the most nerve racking critter for the caretaker, fo me anyway! Much prefer hatching them with the moms...