In which Victor forgives his haircut 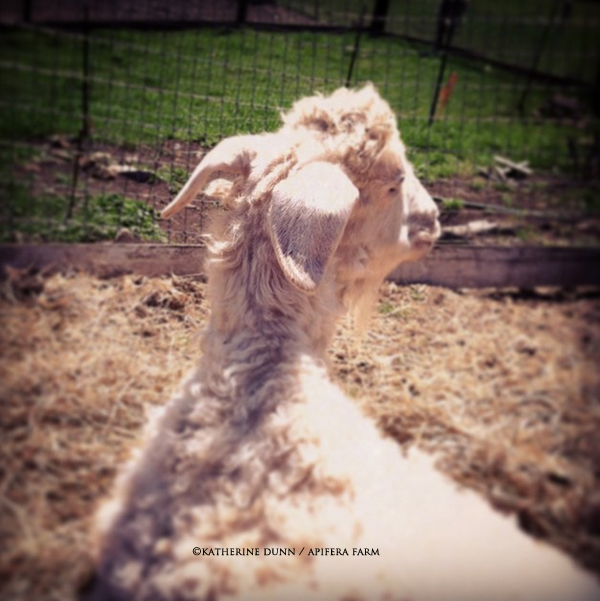 After three separate days of trimming, I think Victor's hair cut is done. I will honestly admit this to all of you-it is probably the World's Worst Haircut on record.

But, I did my best, as did Victor.

"It's okay," he seemed to say, "I don't care what it looks like, it feels really good."

I do miss his locks, which are now in my studio and being used on my sewn Raggedy Creatures.

Sheering Victor is problematic because of his deformity and condition. He can not lay on his side for more than 5 minutes and even that is probably very uncomfortable for him. Nor can he stand still, he has to constantly shift his three good feet. In the past months, he is not using his front leg to put weight on anymore. We don't know why, but his body is so messed up that his shoulders are probably giving out.

When I worked on him, he was a real trooper, but he–and I–could only take so much at a time. It was really hard on my body too because of how I had to trim him while he sat down in the position he likes–it was the only way to keep him still.

This is case where I am wondering if the quality of Victor's life is worth what is most likely a lot of discomfort. Now that he isn't using one leg, I just don't know if it is right for him, to keep him going. His disposition is good, so I haven't made any decisions. He is tripping more when he gets up, due to his weakening.

In the meantime, he still loves to sit on the compost pile in the sun, and that is the best thing I can give him right now. Sweet, old, crippled Victor.

{Did you know you can either subscribe monthly, or give a small donation? It helps reward me for my 10+ years of stories here on the blog, and in turn helps with the monthly cost of caring for The Misfit}
Posted by Katherine Dunn/Apifera Farm at 1:06 PM

Its always such a hard decision to make. When our animals need us to communicate with them in ways we cant, we have to trust our hearts.