What do you say when a friend's mate dies...with open ears and heart, I say, "It will be okay" {somewhere in time} 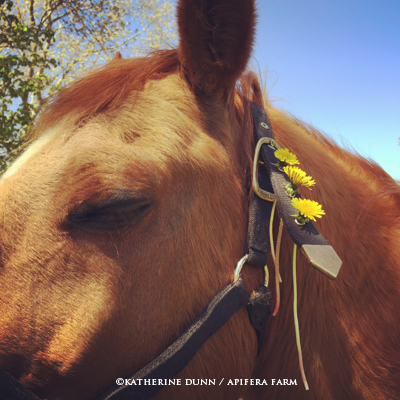 I went for a ride this week, placing dandelions in Boone's halter after the ride. It was a beautiful, perfect day. I had no complaints, really. And my husband, my best friend, was alive. Every thought came back to that.

A day earlier I had heard the shocking news that a friend of mine lost her husband, who was only in his mid fifties. He had lived with the consequences of seizures his entire life, and knew the ramifications but always had a wonderful attitude about it. He had a seizure, fell on the open stairway and suffered a brain injury that he could not recover from.

My friend tells of how she awoke that morning and was a bit sore from her long walk the day before, and her time in the garden. Her husband said he'd give her a mother day massage. They had no children, but loved their dogs and they were family. I imagined all the people who have woken up to normalcy, and hours later, they are living in between two realms.

It is normal and human to think of our own worlds when we hear of a sudden death. We are not only shocked and sad for the survivors, but it knocks you between the eyes that life is life, death is death and the two are intertwined every minute–you don't get to choose which one you want, it's not an a la carte menu once you are born. One false step, one fall off a horse, or stairway, and it could be gone, poof. All day after I heard, literally everything I did from making a piece of toast to working in the garden, I thought of my friend. I thought of her lying in bed the first morning after he'd died...the shock must have come back in starkness that first morning. Sleep might have given her a reprieve, but upon waking...

Later that day or the next day I forget, I was planting my sunflower seeds. I always plant sunflowers, such joyous, magnificent creatures, I call them Goddesses. My friend's husband loved to garden and be in Nature, and he had a garden he considered his sanctuary. He had been working on it for 14 years or more. It is where the family and friends will gather to celebrate his life, honor his next journey, and sit amongst his energy enmeshed in every living thing he nurtured there. I was on my hands and knees, using my bare hands to till the already prepared bed of dirt. It was quiet, even on the front road. I could smell the salt air of the cove. An occasion animal sound wafted from the barnyard.

My husband is alive...

I thought. And then I saw my friend's husband's face, smiling. He had what I would call a gentle smile, like Martyn's, a smile that had no ego, no slyness to it. His face stayed in my mind like that for some time.

I wrote to my friend later, by email, wondering all day-what words would be best for her right now? I knew she had many details to deal with, I knew her family was with her. I only wanted to tell her her when she was ready if she needed, I was there with open ears and heart, to listen. I told her about her husband appearing to me as I gardened. They were very connected to the Earth and Nature, and were spiritual too, as I am. I knew it would have meaning to her. We are both of the frame of mind that energy does not disappear. His energy is just not in his body anymore, so magnificent is it now that it can zap around all over the place. She wrote back, and liked the story.

It might not be okay as she has known, but it will be okay in a different, at-the-moment-unimaginable-way. For me, this is what I can tell people in grief. I was told this by a friend when I lost my mother, the day or the day after when I was still hardly breathing, when I was not of this realm, I was so ungrounded from her death that first few days. And my friend who had lost her parents called me and immediately said,

"Your mother is okay."

It was simple, and direct. I believed it. And I needed to hear it, and wanted to hear it. It was not a lie, it was not sugarcoating the truth. You can either walk into grief thinking it is not okay, or having a compassionate source that tells you it is going to be okay. I prefer to be that source for someone. It might not be okay today, but it will be, in a different way.

My mother would say, "It will be okay," when I was in dire straights. It was always okay, she was right, but I always needed to hear it. Perhaps I am one of the lucky ones who had that grounding of a mother that instilled that in me, perhaps there are people out there that truly do not believe in bad times, challenging times, that saying "it will be okay" is realistic, or fair.

It will be okay. I will share that again with my friend, after I listen to her, in time, when she is ready.
Posted by Katherine Dunn/Apifera Farm at 9:05 AM

So very sad for her. I hope S. finds some comfort in your beautiful words, Katherine.

This is beautiful and true. Thank you.

How well I remember you sharing those same words with me after my mother passed and how I circled back again and again to them in my grieving. I think too as I make my morning toast, how my mother made toast for her breakfast and that this simple action (boring one might think) is so sacred to me. My mother isn't making toast now, but I am. And one day ... xox