When I'm with an animal, I check my intentions 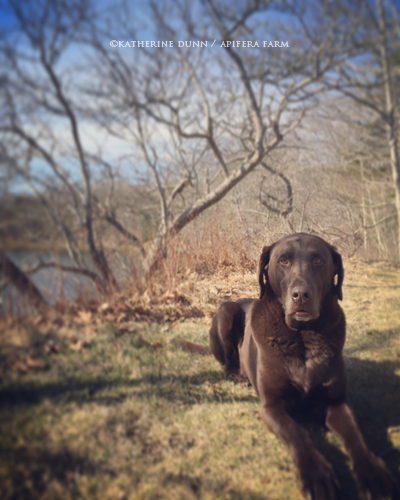 Muddy is going on nine later in the year. He is still very athletic and most, including vets, think he looks much younger. But I've noticed in the past six months or so he is getting the old dog look. Sometimes I think I see Huck when I look over at him. They were five years apart in age but out of the same parents. I did that on purpose, knowing someday Huck would leave us, and Muddy could carry on, in his own way of course. The two dogs were very different. Where Muddy could run all day, especially with his frisbee, Huck became a lay-around-and-just-be-me-lab, pretty much when Muddy showed up as a pup. He played, but it was as if he thought,

OK, good, they have reinforcements, I can relax a bit now.

I spent all day and everyday with the Huck, and when Mud came along, Huck sort of became more of my at-your-side-guy. When we moved to Maine, Huck was still healthy, although gimpy, but by the next spring his behavior and changed a bit. I saw deep thoughts in those brown eyes, and he began sleeping away from Mud, by my side at the bed. When I found the large mass on his neck, which came on quickly, I knew something was wrong. It was a wasting cancer, and we helped him on his way. He was 12. It was a horrible goodbye for me and Martyn. "End of an era," as Martyn said.

Muddy is a talker. He talks in a series of lip movements, lip curling, and yawning words. We walk together and he loves that. He seems so very happy when he sees me put on-not my Muck boots-but my hiking shoes.

That is the thing about dogs, they just want to partake in simple, but important, rituals with their owners, like a morning walk to sit by the cove a spell. They could care less about my aging face, but are completely tuned into my intent of the moment. They pick up on that, which is probably the best training lesson I can remind myself of with any animal-check your intentions with an animal, because they sense it. 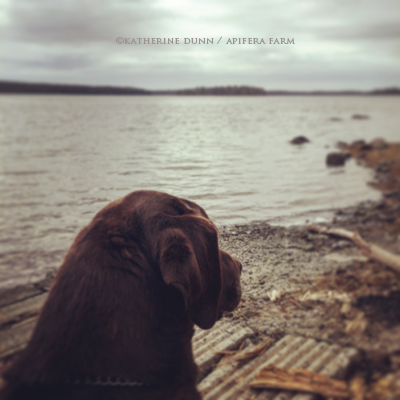 Posted by Katherine Dunn/Apifera Farm at 8:34 AM

Sweet photo. And the cove looks great, I don't think I've seen a photo of it before and I wondered what it looked like. I would walk there a lot.