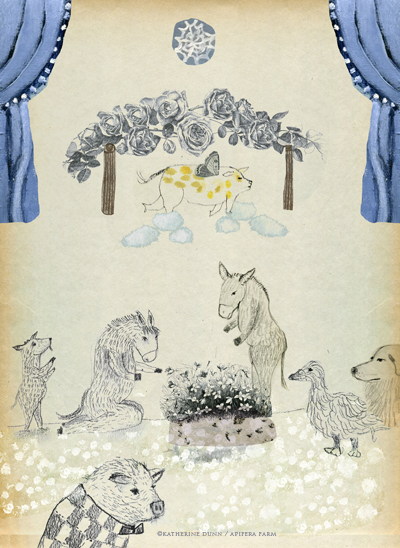 As I sat with the body I could here the news spreading amongst the animals,

and on and on until the last creature was informed.

I placed a drop of oil on her body,

I wrapped her body in her pink blanket, made just for her, embroidered with words so carefully placed,

We placed her in our clam sled, and began the slow march to the front garden, a place we had gathered before over the last couple of years. As the animals stood in front of the freshly dug hole in the Earth, Martyn helped me lower Rosie's body into the ground, her pink blanket covering her to keep her forever warm. I placed a shroud over her eyes, a shroud made from Assumpta's wool. Burial items had come from afar, and I placed each one, thoughtfully, and carefully around her body. I placed feathers with her for flight, a toy llama for safety, a pig for a reminder of what she once was, and on the top, a red rose.

Earnest stood of to the side, he had dressed in his formal cape and bow tie. The goose, who had slept amongst Rosie in the last two weeks, also came. White Dog watched. Pino and Paco both said their goodbyes,

"I understand you," said Paco. He placed a slip of paper in the grave, with a special, private poem to Rosie.

Earnest said not one word.

We covered the body in ancient soil, perhaps Civil War heros who once lived here had touched it long ago.

When the final dirt was spread, Opie pointed to the sky,

"Look, it's Rosie, she has beautiful polk-a-dots now!"

The animals had paid their final respects, and as they left they all bowed to the nearby grave of The Head Troll. Martyn returned to the house.

I knelt down, and whispered one last time,

As I returned to the house, it was still, and clear, and crisp. I heard a rustling, clouds appeared over head, tree branches snapped, and a distinctive hrumf-grrr-arrrr-hrumpf sound echoed in my hear.

Heaven just got a little grumpier.
Posted by Katherine Dunn/Apifera Farm at 1:59 PM

Email ThisBlogThis!Share to TwitterShare to FacebookShare to Pinterest
Labels: Art, Pigs, Rest in Peace, Rosie the pig, The World's Grumpiest But I Am Fine As I Am Pig

Sounds like a beautiful send-off and I was thinking about the reunion with Stevie ... What a gift it has been for all of us to get to know Rosie through your images, stories, and videos. It is kind of wonderful to think about how many people have been touched by Rosie and are mourning with you. I know my girl and I have been talking about her all day. Gone, but never forgotten, dear Rosie! xo

I loved hearing about and seeing pictures of Rosie over the years. I will always remember drawing her in your online drawing class. Fly free and you all take care. thank you for sharing her life with all of us

Thank you for sharing this touching goodbye. I lost my sweet black kitty at 15+ years a while back. I miss him more than I can say.