What a day, so wonderful 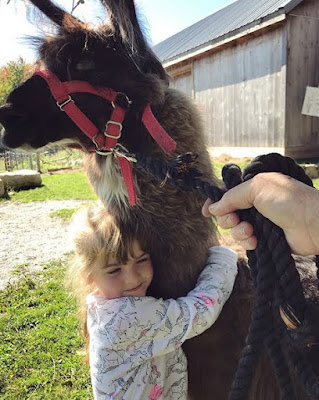 Misfit Love Day 2019 was a huge success on so many levels. We had a steady turnout all day, we had many newcomers, we had a woman drive all the way from NYC just for the event, we had one of our favorite guests come again this year–David who is 102–I almost cried when I saw him coming in. He is a wonder and loves the animals, taking slow deliberate strokes when he meets an animal.

I am tired but just wanted to post these pics. It is difficult taking photos while holding a llama or a pay, and I always feel my main job is to be present so I don't have that many.

Once again, my volunteers were super, and we think we had a t least 100+ people. All ages came and the children were delighted and well behaved. We all agreed that every one who has come to our events are just nice people! And we made -I think_at least $2,000 which is the best we've done at a fundraiser.

And Harry made his debut and was super. He has a fan following now! The trailer worked perfect for it, not tress for him or me that way. Then I brought Arlo out for two walk arounds so he got a workout and di fine. It was a lot for him to take in so I gave him breaks. White Dog proved to be a favorite, and I had him in a stall but we decided next year he will have his own little 'Sit with White Dog' paddock so people can be with him. I couldn't let him be free, it could have proven chaotic. he loves the people though–I can't tell you how many people came and told me about White Dog. I brought Captain Sparkle out just to test the waters and it was a lot for him to take in, so we made it a short 15 minute visit. The goats ran free with the people as did the donkeys and people love that. People always tell me how peaceful it it.

And more importantly, people understand what we are doing and appreciate it and told me-tht means so much. I feel very optimistic as we head into next year.