A Christmas miracle has occurred at Apifera 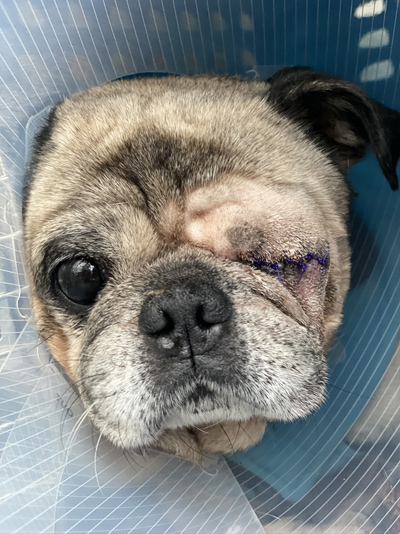 We’ve had a Christmas Miracle at Apifera. I'm now ready to share it with you.

I was minding my own business, working in my office, when I got a call from a friend. She knows my love of pugs, and she knew Hughie [the second Old One Eyed Pug, the first Old One Eyed Pug being Billy Baker], and knew how sad his loss was to me last July. She had heard me say that the universe would bring me a pug. I’ll also point out I had just written the Harry Chronicle Christmas newspaper [that goes to our elder shut in friends] and in this issue we had Letters to Santa, from all the animals. And I also sent Santa a letter asking if he could find me an old pug.

I'm not sure if Santa found the pug first, or my friend did. The pug came from out of state, from neglect, I won't go into the story, it is hard to hear, but suffice it to say he was living in a undesirable situation. My friend brought the pug to her vet and he had a couple different surgeries including eye removal.

She wondered if I wanted him. Um...an old, one eyed pug? Of course!

He could be as young as 9 or he could be more like 12. I think the latter. I tell you that because I have no idea how much time I’ll have with him, but each day with a pug is worth it the tears after they leave.

When the pug got here [I have been hiding this from all of you] we had a scare, his eye reopened. It was unpleasant but not painful. But I just picked him up from the emergency vet clinic [we have a clinic open all weekend and after 5 on weeknights for emergencies, it is a god send] and he has a nice new purple stitched eye now. He is the Million Dollar One Eyed Pug.

I named him Uncle Wally. Uncle Wally was an old family friend from Minnesota. I was five when I met him and looked up to him, I knew him until he died at 90. His wife was my kindergarten teacher. I told Bear that the pug is not your brother like Mud was, he is your Uncle.

I want to thank my friend for all the effort it took. And I want to thank Santa for bringing me this Christmas miracle. Uncle Wally has been through so much. If you’d like to donate to the $700 emergency bill, please do.

But I have a pug...a beautiful, old, one eyed pug.

Uncle Wally is, as you said, a beautiful, old, one eyed pug. What a sweetheart and addition to your Apifera family.

A donation for Uncle Wally!!! I’m SO HAPPY for you Katherine....Pugs are bright shining lights in this world!!!