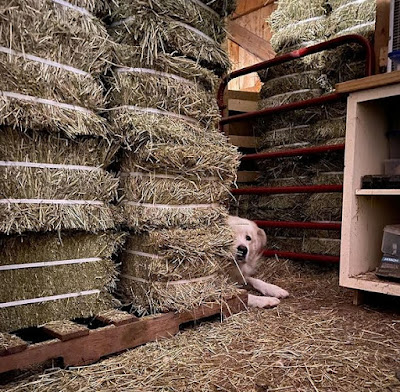 That title says it all. I have been so busy and unable to even focus on anything but the farm. Getting winter ready is always a series of tasks any wheere, but especially on the farm-electric buckets, inspecting the fire stoves, equine coats ready, getting the hay in and firewood. We were so behind becasue of the hot, humid summer we added to our firewood by buying one cord. It felt like sacriledge but sometimes you do what you do. We usually do 4 cords or less [we have furnace heat but keep it at 62].

And thanks to the generosity of Martyn's boss, he had the crew come over one afternoon and we got the 12 tons of hay in. Phew. That was a huge load off my mind. I crashed that night and even though I knew how much worry it was causing me, I really knew after it was all stacked. We could have done it on our own, but...it would have been so hard and taken us 4 separate weekends most likely. I can't toss the bales up high anymore due to my shoulders. Thank goodness I didn't need  to get our usual 17 tons since we are starting later this year to give hay. I have to say, it is such tiny hay bales, they are compressed Canadian, very consistent and better protein. So far everyone is eating it even though there is some stem left but nothing horrible. It cost more by about $2.75 a bale, but if it is higher protein I might try to do half and half next year. But getting the one ton pallets here is a task. I don't think its fair to rely on the crew each year. They did it pro bono for us, which was so helpful and generous but I can't expect that.

Anyway, we got so much done this weekend. Little jobs that mean a lot-like getting kindling cut, getting debris out of fields from past jobs, securing some fence issues, and on and on.

And...the book arrived! Friday afternoon. And it is beautiful. The shipping fiasco-they could not find the pallet in the route from customs-was all because of lack of employees and the mess the world is in all over with Covid. So, I will be getting those out to buyers next week.

Mainly, I want more creative time. It seems like my September was full of so many appointments. And now October is looking like that too-truck fixes, over due doctor stuff, many, many vet visits...I am frustrated by the lack of studio time, but I have to say, I think maybe I needed to be away for awhile from it, I don't know. I just started a raggedy creature and this week despite more appointments I hope to have time for it. I'm percolating things in my mind too as I work.

We also had two vet needs arise in two days-Jonathan the elder cat had what might have been blockage but thankfully it was not and meds helped him. It means going back to all urinary cat food, which I always used before but the then-residents of the elder suite just stopped eating it after years. But now I will go back to it soley. And then I had to have the vet out for old Matilda and her chronic lameness. I had searched for an abscess over the past weeks but found none so wanted an x-ray done which we did. But the vet did fine the abscess which had popped. At least I was looking at the right spot but never found tenderness, maybe I wasn't pushing hard enough. Since it was on the bottom of foot we have her wrapped in a boot. She got instant relief I think. We took a blood panel just to have. And I have her up to 5# of supplement versus the paltry 1# what would eat before we learned her levels had changed and we changed her medicine. She is eating much better now.

Such a mundane boring post! But I have been enjoying getting tasks on my list done. Feels good to get prepped for winter. I hope we have lots of snow this year!

Posted by Katherine Dunn/Apifera Farm at 10:51 AM