A fond farewell to Ragweed 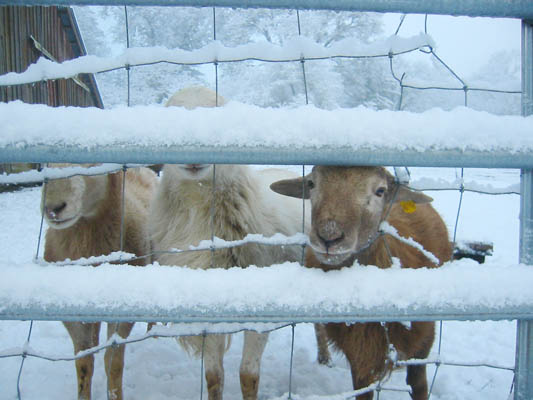 Yesterday we all gathered to bid a fond farewell to Mr. Ragweed [the brown ram on the right]. Ragweed will be living about 10 miles from here with a very nice young shepherdess and her young flock. It always helps when the buyer shows up and you like them. I had gathered the young rams in the morning, and explained to them for about the 10th time that Ragweed would be leaving us to live with his new flock of girlie sheep. But they never listen. When the the time came to take Ragweed, he was very cooperative, until his feet made it outside the paddock gate, and he did a four-feet stop - "Wait a minute, missy, this doesn't seem right." Daisy, Ragweed's mother, was in a nearby pasture and bleeted to him- instant recognition of her son- and he recognized her bleet and returned a farewell. The donkeys stood by with that Eyore look - "Here we go again, we're losing another one - 'Be brave, young ram! See ya! Nice to have spent the first 7 months of your life together!" 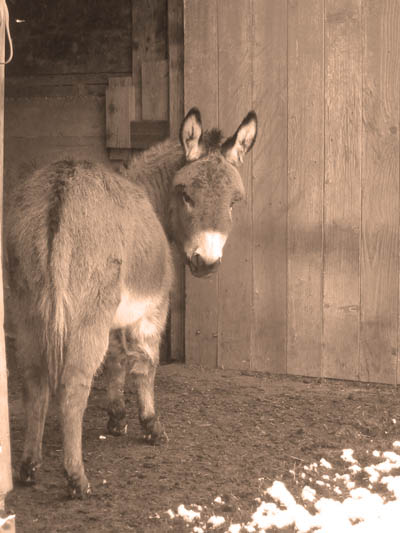 You can say all you want about not putting human emotions on to animals or livestock, but when you separate them from their own, it's gut wrenching. We got almost to the transport van without much trouble, until he got near the car and he went down on his side. He'd had enough. "No thank you, I don't know these people, I'm not getting in that van...I'll just rest here while you people work it out". With that I let him rest calmly for awhile - first time I've ever had a sheep just lie down and rest - even a foot prod didn't budge him. We eventually just picked him up and put him in the van. His little face was pressed against the window as I stood and chatted with the new owners. "You'll do great Rag," I said through the van window, "You get to make babies now! "...."Babies? I am a baby," his facial expression said back to me. 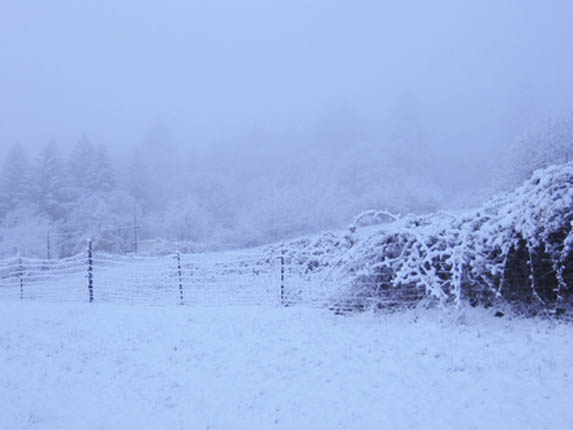 One day you put two sheep in a pasture, 5 months later you get another sheep - that's the story of Ragweed. He's just a ram going off to make sheep of his own now, as it must, and should be. But as I walked to the barn last nite and witnessed the beauty of the ice and fog landscape, it was apparent Ragweed wasn't there. Each animal has a distinctive energy - felt when they are there, and recognized as gone when they leave. The nightly feeding of the donkeys made me glad to be me - have you ever fed hay to a donkey and then leaned down and put your arms around their belly to listen to their tummy rumble and heart beat? It's a nightly event here.
Posted by Katherine Dunn/Apifera Farm at 8:35 AM

That is a really nice post!!
Nice blog you've got here :)
Cheers!

Anytime I see the work "farm", I have to check it out. This animal lover, at almost age 60, still regrets never living on a farm. After reading your blog for several days, I added your link to my "Blogs That Inspire Me". Keep up the great work on the farm and the blog!

You can paint with words! I have such a vivid image of little Ragweed lying down and having to be lifted into the van.

It's always hard to send little ones off into the wide world, but I'm sure he'll be fine once he gets into his new job. ;-}

I wish I had a donkey to hug. Extra cuddles for the kitties tonight.

I saw your artwork about a year ago and today found your website, blog, etc. Your artwork is absolutely so beautiful!!! I look at so many art sites but your art truely inspires me more than any artist. I am an artist, too and when I look at your art and your creations, I think of my childhood and when we used to live in the woods. Your work is just so wonderful!! I put it in my favorites and will tell all my artist friends about your wonderful work!!! I appreciate your love of nature, too. You might like my artwork, too, Katherine....I use nature to create my little furniture and houses and little people. I am so happy I found your work again!!!

LOL, I guess nobody told you the Cardinal Rule when attempting to relocate sheep: NEVER EVER let them sit down! (I actually have a blog post about this half-written in my head.)

Just loved reading this. Your writing and the photos are wonderful as always.
xx

When I saw the photos on this post, it immediately reminded me of back home in New Jersey. Imagine my surprise to find that you're on the opposite coast! And you say it reminds you of your home in Minnesota, which is where I'm currently living! No, your snow reminds me more of a New England landscape than a southern Minnesota one. Where in MN are you from?

Your farm is beautiful!