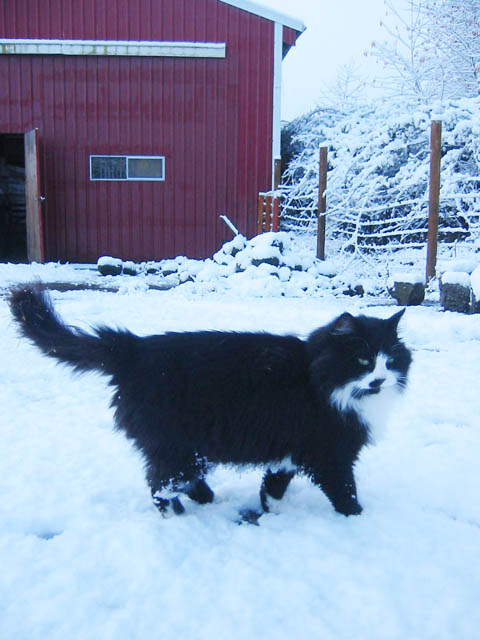 I awoke feeling like a child again. I knew we were to have rain storms, but when my eyes opened it was to the 100 year old Doug Fir tree out my bedroom window, its arms draped in heavy snow. I sort of had a moment of confusion, as it felt like I was still in my old homeland of Minnesota. Waking up to the 'sound' of snow, it has a silence one can hear, and I just felt like I was back home. Huckleberry Pie and I [we both enjoying saying this over and over] declared it a farm snow day, Billy seconded the motion, and so after a few quick yoga poses, coffee and yogurt [due to the 3 pounds of extra material in my body consisting mainly of pecan pie], I did barn chores and took my camera. As usual, my camera didn't capture what I saw. The sky had this silver tone in the background, with layers of fog on top of it. There was some blue early on, but the silver came back. Beautiful. 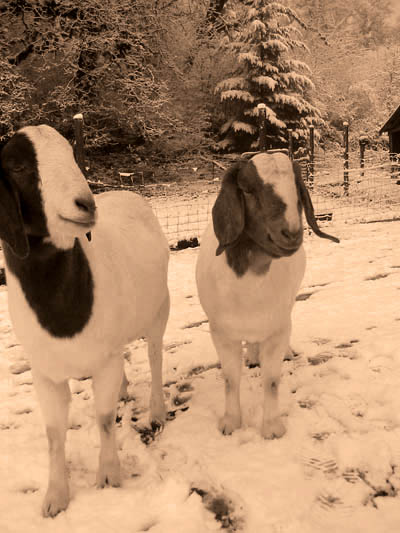 Since we rarely get a lot of snow here, I had this naive notion that the donkeys would be out frolicking like dogs in their first snow. I made them, along with the young rams, eat outside, like donkeys must do in Minnesota, so they could experience the joy of snow. The goats were somewhat perplexed, unimpressed really. But Miss Pussytoes the cat was up early, playing with little snow globs. All the fences, all the manure piles, all the posts created new patterns with snow - I will play with some white on white patterns today, I think. The new bamboo screens Martyn just made looked nice too.

Our Thanksgiving was relaxed. We had dinner in town at Martyn's family's but were home by 6pm, allowing us to take naps in front of the TV before going to bed. The next day, we worked in our garden which was so nice, and then took time to take Pino and Paco for a long walk. We made a visit to our favorite winemaker to buy some of his Pinot to enjoy with our first meal made of our own lamb meat. We had lamb chops, and they were wonderful. I was so proud. I wonder if other farmers shed a small tear the first time they cook something they raised - not out of sadness, but pride for both the animal and the farmer. I mean, I was just proud!
Posted by Katherine Dunn/Apifera Farm at 10:35 AM

Email ThisBlogThis!Share to TwitterShare to FacebookShare to Pinterest
Labels: Dogs of Apifera, Huckleberry Pie, Life on the farm

I love the photo of Miss Pussytoes in the snow! I hope we get some white stuff here so my kitties can frolic in it with their big snowshoe feet.

With our heritage turkey we enjoyed a Yamhill Valley Vineyards pinot noir that a friend brought. That wouldn't be your favorite winemaker, by any chance...?

Oh, it does look like Minnesota! I think the gods must be confused because we have your rain this morning. Enjoy!

It does look like Minnesota 'should'look! I guess the gods are confused as we have your rain this morning. Enjoy!

Cathy- We are currently putting Domaine Coteau at the top of our special occasion wine, his grapes are out of Amity but he hasa wonderful little unpretentious tasting room there. We also like Witness Tree syrah, and are big fans of Andrew Rich and Hammacher wines. I'm not sure about Yamhill Vineyards - but I'm sure it was good? And we've been reading up on heritage turkeys - was it good?

Hi Praiire Chick - hey everyone, she makes great soap! Get to her site http://naturally-natural.blogspot.com/
plus she's from minnesota so she must be special...

And Rosy Posy Rosienesssss - I have a land line, do you know how sad it makes me I can't load your site as much as I'd like. You send me a lot of visitors too. Did you know my head ewe is named Rosie?

So fun to see your farm in the snow. That photo of Billy eyeing the pie - priceless!

Thanks for the lovely snowy photos. The picture of your kittycat in the snow with the red barn in the background made my day. Animals are so wonderful, aren't they? and so is snow.

The heritage birds are outstanding. Very expensive, but worth the splurge to support Heritage Foods USA's efforts to build a market for these old breeds. Still, I've decided it's more important to eat local so next year's turkey will come from a nearby farm.

You should have seen my ducks, when they realized their pond was frozen over! -- "OMG! Where did the water hole go?"